Always looking for trouble: you’ll be sorry if your pumps are cavitating 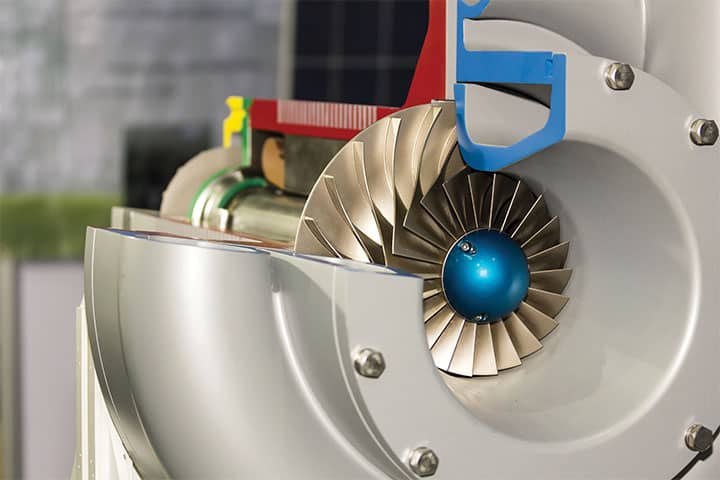 Pump cavitation is an insidious thing. A cavitating pump does not operate on its pump curve, it will not pass the desired flow rate, and is continually in the process of destroying itself. During my Piping System Fundamentals classes I always pose the question, “How do you know if a pump is cavitating?”. The typical response is “It sounds like it’s pumping gravel”.

This is one way to determine if it’s cavitating, but by the time you hear it, the impeller is well on its way to the scrap heap.

With all the pump damage cavitation causes, you would think there should be a better way. There is no such thing as a cavitation meter; the only way to tell is to calculate the Net Positive Suction Head available (NPSHa) at the pump suction.

Once this is done, you need to compare it to the pump’s NPSH required (NPSHr) value supplied by the pump manufacturer.

If the NPSHa at the pump suction is greater than the manufacturer’s NPSHr for the flow rate, the pump is not cavitating.

When this occurs, some of the liquid at the pump suction turns to vapour forming small bubbles in the flow stream.

The vapour bubbles in the flow stream take up more space than the process liquid; this causes the pump performance to change while it’s cavitating.

Following the flow of the liquid vapour mixture through the pump, as it passes into the eye of the rotating impeller the fluid pressure starts to increase.

When the local pressure within the impeller increases above the fluids vapour pressure, the bubbles return to liquid.

The small vapour bubbles violently collapse on the pump impeller, causing a loss of some of the impeller material. Over time the worn impeller will permanently affect the pump’s ability to operate on its curve.

As previously mentioned, when a pump is cavitating it is not operating on its pump curve. That difference in the pump curve is how the manufacturers determine the pump’s NPSHr value.

During the test, the pump is operated while the suction pressure is reduced.

When the observed pump head drops by three per cent, the test standards define that as cavitation. The manufacturer then calculates the NPSH at the pump suction and lists that as the NPSHr value.

If you look at the pump standards, the pump is already cavitating when the suction pressure is at the NPSHr value.

The only way to know if a pump is cavitating is to do the math. NPSH available is described in Formula 1. Figure 1 shows the location of each item in a system. 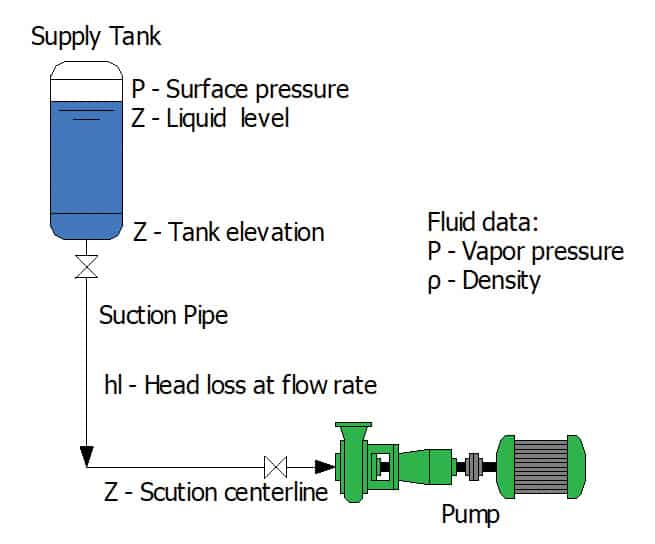 The NPSHa equation is made of three parts, the pressure, elevation, and losses in the pump suction pipeline.

The first part deals with pressure consisting of the tank pressure plus the local atmospheric pressure minus the vapour pressure of the fluid.

The pressure value is converted to head by dividing the conversion factor by the process fluid density.

The third element is the head loss in the suction pipeline.

The second step is to go to the manufacturer’s supplied pump curve to determine its NPSHr for the flow rate.

Since the pump is cavitating when the NPSHa equals the NPSHr, it is good practice to include an NPSH margin ratio. A variety of standards are available to provide guidance based upon the pumping application.

The final step is to determine if the NPSHa is greater than the NPSHr multiplied by the NPSH margin ratio. If that’s the case the pump is not cavitating.

Note when looking at the NPSHa expression a variation in the suction tank level, pressure, or fluid density affects the pressure and elevation parts of the equation.

The flow rate through the suction pipeline affects the head loss value as well.

I can hear you now

You’re probably saying, “I have a plant to run, I don’t have time to do all this”. The good news is that most piping systems typically don’t experience pump cavitation.

That way you limit your search to pumping applications with low suction pressure, or pumping fluids with high vapour pressure, or with high flow rates.

When you’re looking for trouble you can develop a spreadsheet to help in performing the necessary calculations.

More than likely, the most difficult task is to find the manufacturer’s supplied pump curve to determine the pump’s NPSHr value.

So the next time you think a pump is having a pump problem, you should perform your NPSH test. It’s a great way to look for trouble. Ray T Hardee, PE, is the Chief Engineer and a principal founder of Engineered Software Inc., creators of PIPE-FLO® and PUMP-FLO® software. The PIPE-FLO product line helps some of the largest companies across a variety of industries find hidden profit in the design and operation of their fluid piping systems through simulation software, modelling services, and training opportunities. Hardee is a member of the Hydraulics Institute, ASME Energy Assessment for Pumping Systems standards committee and ISO Pumping System Energy Assessment committee. Ray’s publications include Piping System Fundamentals and contributions to HI’s Pump Life Cycle Cost and Optimizing Piping Systems. He can be reached at [email protected].