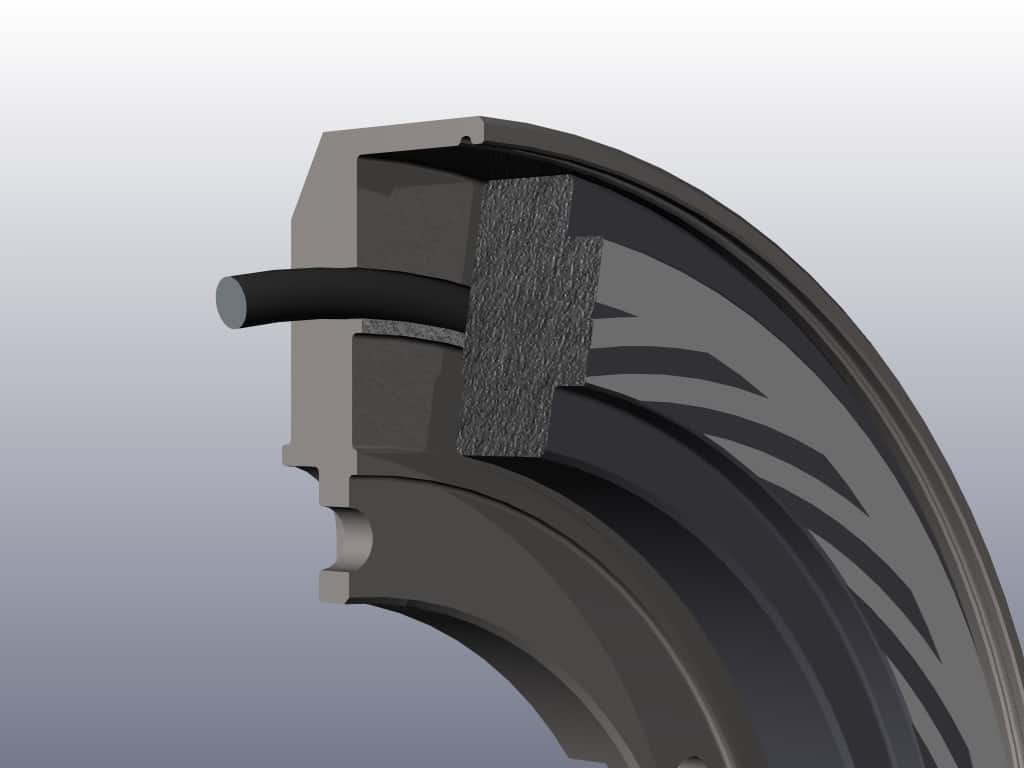 The word “slurry” is a very general and broad term used across a wide range of industries. Typically, slurry refers to a fluid containing a significant proportion of solids, abrasives or fibres. Slurries are quantified by their overall specific gravity and are usually described in terms of percentage of solids in the carrier fluid. This percentage ratio is usually expressed as ‘% solids by weight’ or ‘% solids by volume’. Due to the solid matter being more dense than the fluid itself, slurries can have high specific gravities and are often non-Newtonian fluids.

Pumping slurries is common in numerous applications such as mining, pulp and paper, and food processing. These particulate slurry applications or services include, but are not limited to:

The percentage of solids present, the hardness and the size of the particles in the slurry, as well as the characteristics of the carrier fluid itself are key factors that require careful consideration when choosing the appropriate sealing mechanism.

Irrespective of the slurry constituents, the key objectives of a slurry pump seal are to:

An overview of typical sealing technologies

Gland packing is an early form of sealing device, in which braided material is formed into rings and compressed axially between a shaft and the stuffing box to provide a basic seal.

As a sealing method, gland packing has several key disadvantages, including relatively high leakage, the need for regular adjustment onsite and high friction, causing increased energy consumption and wear of the shaft sleeve. Figure 1: An example of gland packing within the stuffing box.

Single seals, defined in API682 as arrangement 1, are the simplest and cheapest method of achieving a seal for a high-pressure pump. The mechanical seal faces are lubricated by the process fluid.

For sealing slurries, an API682 Plan 32 flush is recommended. This system provides injection of clean liquid from an external source into the seal chamber (also known as the stuffing box) at a pressure slightly higher than the chamber itself.

As the external fluid flow needs to be high enough to prevent ingress of the slurry, the costs associated with the flush can prove prohibitive. The inner seal faces are lubricated by the process fluid. Any leakage across the inner seal is absorbed by the buffer fluid and dissipated in a controlled manner.

For slurries, this arrangement leads to contamination of the buffer fluid with solids and abrasion of the seal faces.

To combat this an API Plan 32 would also be recommended for a dual unpressurised seal, with the same drawbacks as a single seal for added fluid expenditure, but with the additional costs of circulating another fluid. 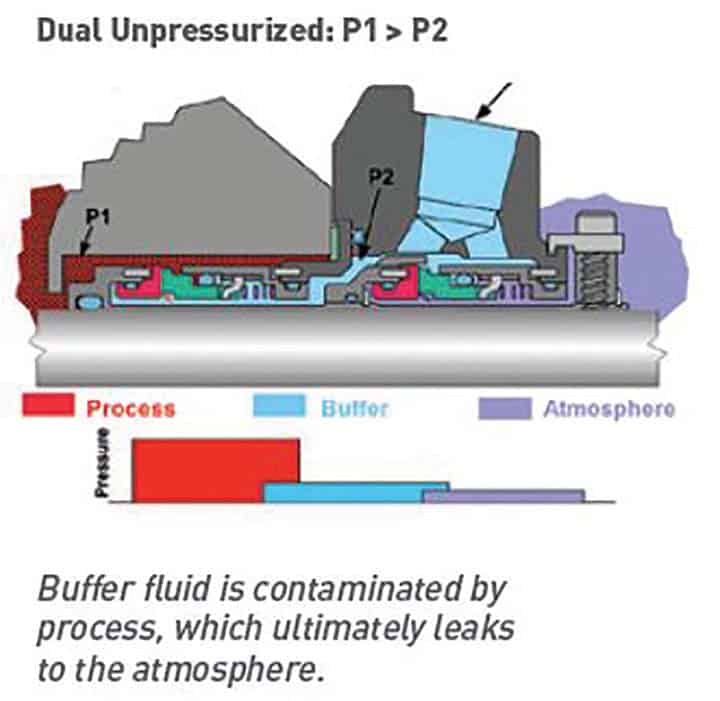 Any leakage across the inner seal face will therefore be from the barrier fluid into the process fluid. The seal faces are lubricated by the clean barrier fluid.

As the leakage across the inner seal faces is clean barrier fluid, abrasive particles from the slurry are flushed away from the seal faces.

This is the most expensive option due to the complications of providing a pressurised barrier fluid system.

However, this option generally offers better reliability than the other two arrangements since seal performance is not dependent on the process fluid for lubrication. A conventional mechanical seal operates by utilising the higher-pressure fluid as a film between two precision lapped seal faces. The hydrodynamic action of the seal allows a film of usually <1 micrometre to form which lubricates, cools and minimises mechanical contact.

This principle ensures that any leakage across the seal faces occurs from a higher-pressure fluid into a lower-pressure region.

Dynamic lift technology uses grooves on one of the seal faces to generate pressure between the seal rings so that they physically separate and operate in non-contacting mode.

The most well-known use of this is for dry gas seals, where a barrier gas at a higher pressure than the sealed pressure is used to separate the faces.

Dynamic lift USP utilises specially optimised spiral grooves on one of the seal faces to create a pumping effect. The face design generates a positive pressure across the seal face from inside diameter to outside diameter, i.e. from the lower pressure buffer fluid to the higher pressure process fluid in the seal chamber.

This has the effect of raising the pressure of the fluid film between the seal faces to above that of the process. The pumping mechanism creates a controlled flow of buffer fluid from low pressure into the higher-pressure process fluid.

The seal acts like a pressurised dual seal without the need to pressurise a barrier fluid.

The low-pressure buffer fluid is sealed by a containment seal typically operating at the pre-set buffer fluid pressure but capable of containing the sealed chamber pressure in the event of an inboard seal failure. 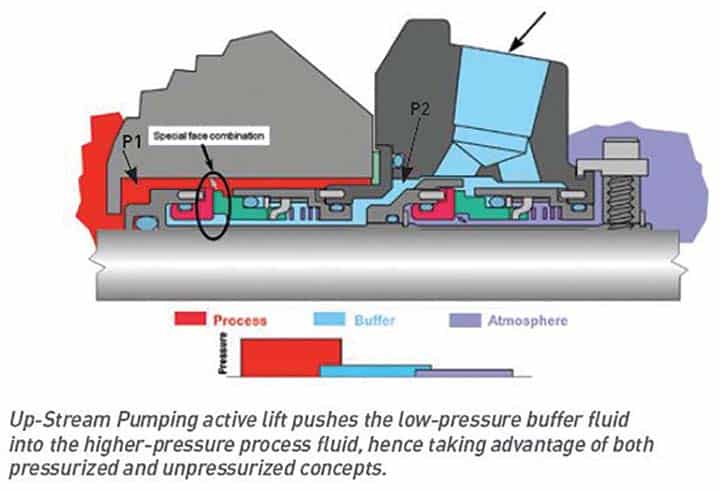 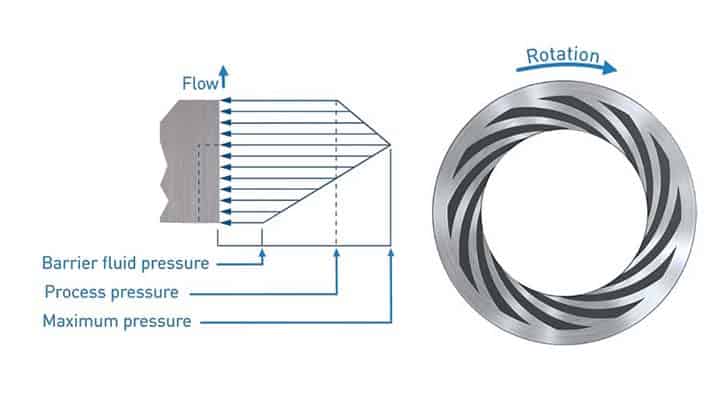 The first high pressure USP seal was designed and validated back in 2003, leading to the creation of standard USP product ranges. The initial design focused on an emulsification of oil and water contaminated with varying concentrations of sand.

The 75mm seal design shown in Figure 7 was tested under the following operating conditions: Figure 8 shows the condition of the seal face components following a 200 hour slurry test. After testing faces were in as-new condition with no wear or contact marking. 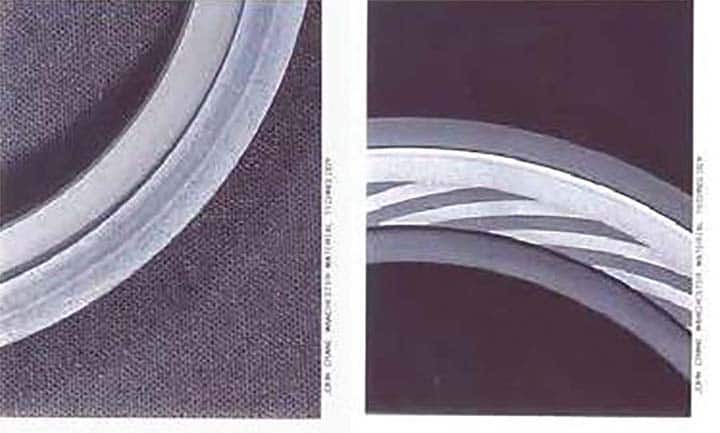 Since this application went live, further development has been performed with designs capable of running at up to 100 bar(g), with laboratory testing performed in excess of 200 bar(g).

This allows the design of bespoke engineered solutions when applications fall outside of the standard USP range of products.

By nature of the design and operation of dynamic lift USP mechanical seals, the required support system complexity is greatly reduced compared to that used with a conventional pressurised dual seal.

Due to a lack of cooling requirement for many designs, the system requirement is simply an elevated tank with an optional automatic fluid top up system. Figures 9 and 10 show the basic support system. 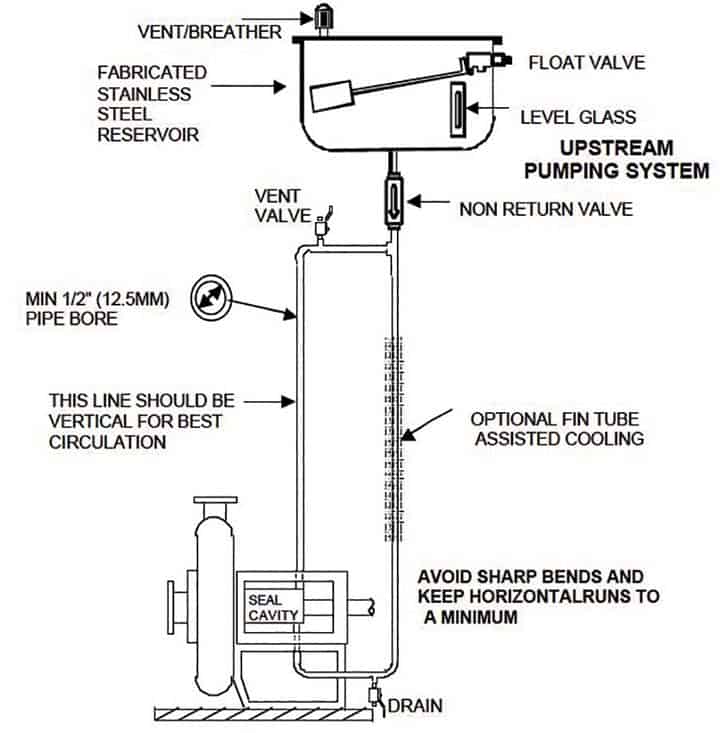 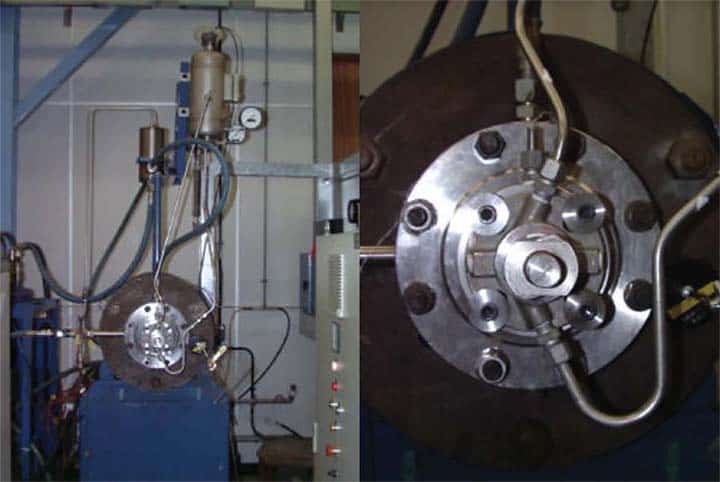 The technology is an alternative to traditional gland packing or standard mechanical seal arrangements.

As industries are being encouraged to reduce energy and water consumption, improved sealing technology is seen as one method to improve environmental performance.

Due to non-contacting operation, dynamic lift USP sealing technology can assist with lowering overall environmental impact through reduced energy and water consumption, whilst the relative simplicity of the design and operation allows a significant improvement in not only the reliability, but the operating costs of the associated assets.