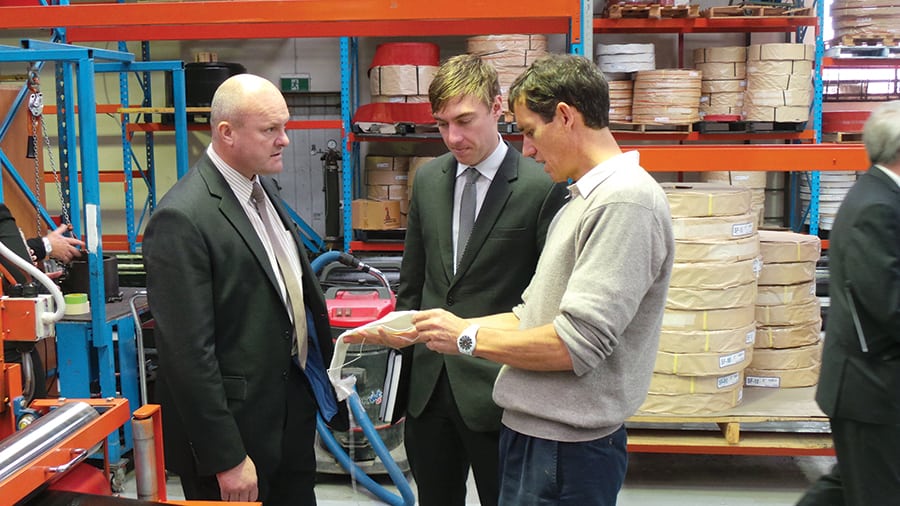 In December of 2011, Crusader Hose was successful in winning a competitive tender as part of the Australian Government’s Textile, Clothing and Footwear Strategic Capability Program (SCP). They were awarded a grant for the development of an innovative new hose process that would offer a variety of advantages to users as opposed to the commonly used poly pipe.

The resulting product, Flexibore 100, is now on the market.

Flexibore 100 is a lightweight, flexible laminated hose process for use in the bore water pumping industry and provides users with a simple and cost effective means of pumping ground water through flexible hose, as opposed to poly pipe.

Flexibore 100 series has been designed to reduce the time of installing bore pumps pumping at shallower depths (down to 100m), while maintaining the advantages of a flexible riser.

Suitable for many borehole applications, the hose is compatible with most submersible pumps and is available in 32mm and 50mm diameters.

As it is designed for simple installation and easy maintenance, it is useful in rural and domestic applications as well as remote areas with difficult access. It removes the need for a safety cable due to its high tensile strength.

Another of Flexibore’s advantages over poly and PVC pipes is that it is resistant to the iron bacteria buildup that occurs in many systems. This results in better lifespan and saves electricity as the pumps don’t need to compensate for the resulting flow restriction.

The SCP grant opened doors for Crusader Hose, and over the last two years, the company has been able to increase its staff by approximately 50{87a03eb4327cd2ba79570dbcca4066c6d479b8f7279bafdb318e7183d82771cf}, creating much needed jobs in the Victorian manufacturing industry.

The Crusader Hose plant where the hose is produced was also able to undergo an upgrade thanks to the new products success, adding more looms so that more hose could be produced for a rapidly growing customer base.

While the success of Flexibore 100 does not directly reduce imports, as poly pipe is already usually produced on Australian soil, the extra capability Crusader Hose gained through its success means that the Australian layflat hose can now be exported to a much greater extent to enjoy success on the international market. A great result for Crusader Hose and the Australian manufacturing industry in general.

Within the country, Flexibore 100 is finding ever more applications. These include use with solar bore pumps and other new technologies. Farmers in remote rural areas who may otherwise have to endure longer waits for someone to service their pumps are able to complete their own pump maintenance by simply pulling the pump up out of the bore over a roller. For someone living on the land who relies on bore water for their livelihood, such an option is far more than just a convenience. This has not been possible with polypipe or any other rigid riser type. A classic example is a farmer in the outback, far from his local store, or any other person for that matter, who can keep up the water for his livestock when the going gets tough.

In May 2013 the Victorian Minister for Manufacturing, David Hodgett, visited the Crusader Hose plant. He was given a tour of the facility and met the many staff responsible for Flexibore 100 and Crusader’s other products and was extremely impressed by this thriving example of a successful Victorian manufacturing business.

About the Textile, Clothing and Footwear Strategic Capability Program

The TCF SCP was a five year, $35 million, Australian Government AusIndustry initiative that took the form of a competitive grant program. Its aim was to support large projects to build innovative capability at the enterprise and workplace level of the Australian manufacturing industry.

The minimum grant size was $250,000 and the recipients were required to match their grant on a dollar for dollar basis. This meant that the smallest project that could receive a grant had to have a budget of at least $500,000 in eligible expenditure, with $250,000 contributed by the grantee and $250,000 from the Australian Government.