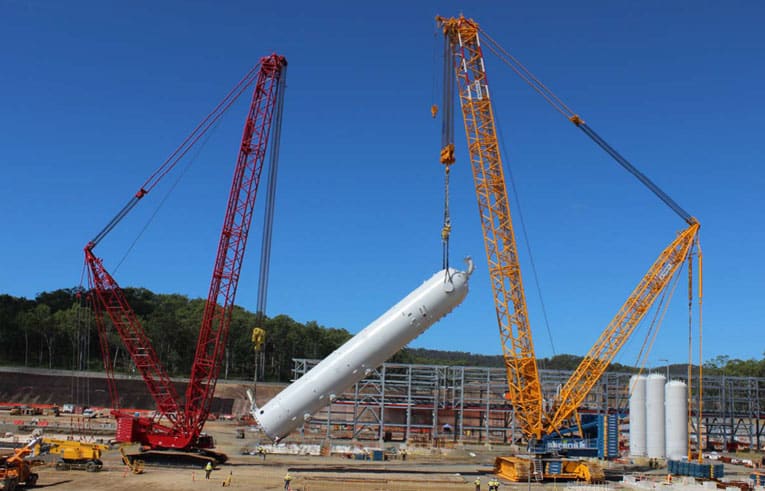 The CO2 Absorber, which weighs approximately 650 tonnes – equivalent to 250 four wheel drive cars – required two cranes to move it from a horizontal to vertical position, to precisely place the cylindrical vessel on its foundation.

Visit the LNG channel for more information about pumping processes and LNG.

ConocoPhillips’ Downstream Project Manager, David Lundeen, explained that the size and weight of the lift meant it was one of the most critical lifts required for the Project.

“Lifting such a heavy piece of equipment involved a great deal of coordination and joint planning with Bechtel for almost two months, with approximately 20 people involved in the lift,” Mr Lundeen said.

At a height of 36 metres, the CO2 Absorber will be used to remove CO2 and Hydrogen Sulfide from the natural gas prior to chilling the gas to –161 degrees Celsius. The freezing point of CO2 is higher than the gas, so without its removal, the CO2 would effectively ‘freeze’ and block the flow of the cooling gas through the liquefaction process.

Bechtel Deputy Site Manager, Dan Dawson, said the lift was one of the most technical on the project so far and tested the expertise of everyone involved.

“Lifting such a large piece of equipment is challenging because the absorber has to sit exactly on its preconstructed foundations – there is no margin for error. The team worked hard to ensure it fit perfectly, and most importantly, was done safely,” Mr Dawson said.

The Australia Pacific LNG project includes development of existing coal seam gas fields in the Surat and Bowen basins and construction of a gas transmission pipeline from the gas fields to an LNG facility on Curtis Island, off Gladstone.