Automated waste collection at the heart of Maroochydore’s new CBD A 53-hectare greenfield site in Maroochydore on Queensland’s Sunshine Coast is being transformed into a Central Business District for the 21st century, with smart technology being employed to create a clean, green, dynamic city. In an Australian first, the development will include a high-tech, automated vacuum waste collection system to collect and transport waste.

Replacing traditional wheelie bins, the system will transport waste from commercial buildings and apartments at up to 70kmh through a 6.5km system of underground vacuum pipes located beneath the city centre to a central waste collection station. The system will collect three waste streams including general, organic and recyclable waste.

Sunshine Coast Mayor, Mark Jamieson, said the waste system would be installed in stages over the coming decade and would make the 53- hectare Maroochydore City Centre one of the cleanest and greenest cities in the country.

“I’m very proud the Sunshine Coast is leading the charge in Australia with this innovative waste collection solution, and I’m sure other cities and major urban projects will soon be following in our footsteps,” Mr Jamison said.

“The rubbish revolution means that city workers and residents will never have to walk past rows of wheelie bins or be woken early by noisy garbage trucks in the Maroochydore City Centre.

“Common aspects of waste collection such as odours and vermin will be avoided, and the costs of daily street cleaning will be reduced.

“As well as making our city heart more attractive, this technology has a track record of increasing recycling rates, so our natural environment will benefit too.

“The waste system will cost $21 million, which will be fully recovered from occupants of the CBD over the life of the system.” 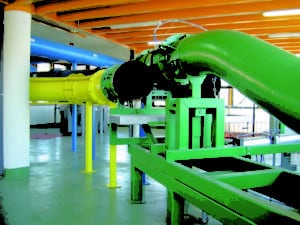 Envac, which invented underground automated waste collection in the 1960s, will handle the waste of over 2,000 apartments, retail outlets and commercial spaces in Maroochydore, with each building including at least three waste inlets for organic, recyclable and general waste.

Public areas will also have their own waste inlets, enabling the new city streets, parks and plazas to be effectively serviced by the new technology and avoiding overflowing bins.

Users discard their waste as usual in Envac’s self-emptying waste inlets—which look the same as other bins—with the waste stored in a sealed compartment below ground until the vacuum pump is activated at the central waste facility, usually twice each day.

The vacuum system will then consecutively collect each type of waste, sucking the waste through a system of underground pipes to the central facility, where it will be stored in sealed compactors for collection by council’s contractor.

Installation of the automated waste system is underway with the first shipment of pipes for Stage 1A of the project arriving in February last year and construction commencing in June 2017.

Construction of the pipe network for Stage 1A is progressing and is on track to be complete in September.

A development application for the waste collection station was submitted late last year and is currently under consideration by the Department of State Development, Manufacturing, Infrastructure and Planning.

The proposed site for the collection station is behind the Carnaby Street office buildings, and will house all central plant and equipment required to operate the system, as well as containers for storage and offsite transport of the three waste streams.

It is designed to process up to 13.8 tonnes of combined general, organic and recycling waste per day at full capacity, and will be capable of automatic and remote operation.

In the Sunshine Coast Council’s CEO’s Quarterly Progress Report Quarter 3, 2017/2018, it is reported that construction of the collection station is scheduled for completion in February 2019.

Council’s Waste Management Branch is responsible for the design, construction and ongoing operation and maintenance of the system.

“Workers and residents in the new CBD will never have to walk past rows of wheelie bins or be woken early by noisy garbage trucks.

“This system will also benefit our environment and help make the Sunshine Coast Australia’s most sustainable region by increasing recycling rates, as has occurred in systems installed overseas.”

CEO for SunCentral Maroochydore—the company established to oversee the design of the new city centre—John Knaggs, said, “Automated underground waste collection is just one of the ways in which the new Maroochydore CBD will be one of the smartest cities in Australia.

“Envac’s technology can be installed because we are building on an undeveloped, greenfield site within an existing urban area – and that has many other benefits.

“For instance, we are also building a high-speed fibre optic network into the city’s very foundations, which will enable us to provide ‘smart’ signage, free WiFi hotspots, real-time transport information, movement sensors and smart lighting.”