We’re in for a decade of growth and continued affluence. We Aussie’s can be comfortable, probably more so than any other race on earth.

The millennial drought has crippled agriculture from North Queensland, all the way through to the Victorian dairy industry. Farmers have committed suicide, properties have been repossessed, good hardworking people, risk–takers, have been bankrupted.

Then, to cap it all off, we wind up with a bushfire season from hell that  has scored enormous media attention, followed by flood and very welcome rain, but not always where we want it!

Now, consider this. The weather is changing. You may call it climate change, you may deny climate change, but the graph shown below clearly indicates that there are things going on here that are undeniable. 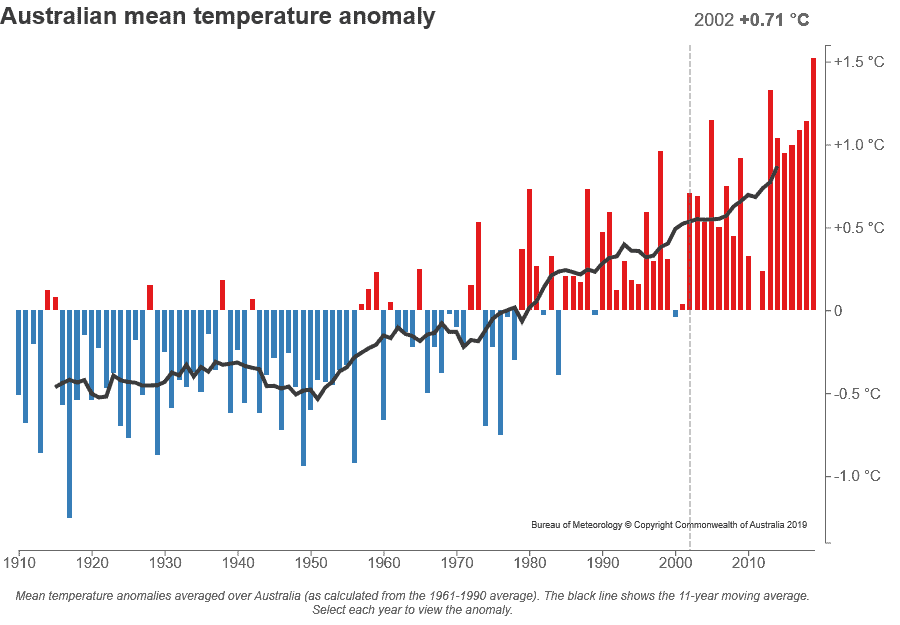 We have had droughts before but, this one is regarded by veteran farmers and country earthmoving contractors as the worst they have ever seen in their lives. The human cost has been horrific.

And why? Because we fail to provide those hardworking folk in regional Australia with water security. In an emergency instead, we truck huge amounts of water into towns like Murrurundi in the Hunter and Stanthorpe in Queensland.

There’s more. We also truck huge amounts of hay to try and keep farmers’ stock alive at a huge cost, much of it donated from the public, rather than by the government. And all of what? Because we don’t have water security.

Firefighting authorities will tell you the bushfire season isn’t over, just because it rained. The fires may be under control now but, all we need is three or four days of 35 degree plus temperatures and we’re back in trouble.

If you believe the experts, and I am talking here about the esteemed New South Wales Rural Fire Service, the CFA and even the Brigade Captains around the country – they all tell the same story.

There was inadequate backburning during the winter and the results of the sustained drought made the bush tinder dry.

We all saluted the firies and particularly the volunteers who give up their own free time to help others. Not only that but, when the chips are down, they put their lives on the line!

We even ran a survey to find out why they do this. Here is one answer from Craig Warren from Wallington Fire Station in Victoria. We asked him, “What motivated him to join the CFA volunteers?”. His answer was, “The only reward is feeling good about you by helping others”.

Christmas Hills Brigade in Victoria has a history of active women firefighters going back to the 1970s. Several of these ladies are officers and hold important roles within the brigade. We salute these folk and the efforts they make, and are both humbled and inspired by their efforts.

However, getting back to business. We have to take a lesson from the Captain of the Capertee RFS Brigade who commented on television that the problem they had was keeping the water up to firefighters so they could do their job. Again, we always seem to come back to the problem is water. There’s either too much or not enough!

The fact is, Australia is the dry continent. We Australians are focused and concentrated in four cities, with 65 per cent of our population or more in those locations. Take one step further and you’ll find that 85 per cent of our population live within 40 kilometres of the coast. Not only that but there’s more moving to the coast every year, with country towns emptying, many driven by the drought.

In other words, instead of us populating this vast three million square mile continent, we are in the process of reversing what should be the population trend.

Go back to February 2013 and let’s revisit Tony Abbott’s inspirational dream of building 100 dams across the country as part of a huge flood prevention, fuel power station and “food bowl” irrigation program. This inspiring and dramatic scheme included a $500 million plan to raise the Warragamba Dam, as well as new dams for the Hunter Valley and along the Lachlan River in NSW.

Part of the proposal was also to include piping water 1,500 kilometres from the Kimberley to Perth, so that our sandgroper friends never have to be concerned about water restrictions again.

In a forward document at the time, the Shadow Minister for Finance, Andrew Robb, apparently wrote, “The Coalition Government will not support the construction of dams for the simple task of building them. However, it will back projects that bring demonstratable community benefits.”

He also commented that many opportunities to pursue projects that would enhance water security, mitigate floods, provide hydro power and, most importantly, grow the prosperity of regional Australia have been missed by previous governments.

“Hallelujah!”. Unfortunately, Andrew is no longer in Parliament, but even Greg Hunt, who was Environmental Shadow Minister at the time, suggested that the $30 billion that would get it done, and the projects would be approved and implemented if the Liberal Nationals won power.

The claim was also that this would double Australia’s food production capability, something we obviously need to do if we are going to break our dependence on the mining industry!

So, where are the dams?

These documents quoted above go back seven years and we still haven’t really moved, apart from begrudging acceptance by the Queensland Government to finally get moving on the Rookwood Weir in Rockhampton.

That dam alone will generate 2,000 additional jobs in Queensland and is calculated to deliver a billion dollars extra in agricultural income for the area per annum.

Can the Greens hold us back?

Late Greens Parliamentarian, John Kaye, is quoted as saying that additional dams in NSW are unnecessary. Obviously Dr Kaye hadn’t had enough exposure to drought–affected farmers or their families. He also hadn’t seen enough ailing country towns to understand that you can’t breathe life back into regions without water or build organic farming communities without moisture.

He was also quoted as saying that the dams that were investigated were found to be unnecessary after being tested in environmental assessment! Can you believe it? Somebody actually said that? It’s like the Premier of Victoria suggesting that building dams doesn’t make it rain! We all knew that as well!

It seems so obvious that the only thing that can hold us back from having water security in this country is money or know-how. We in the business know the equipment capability of the construction industry in Australia. We know that we are world-class and that we can build anything. Turn us loose on a pyramid that took Pharaoh Cheops 20 years to build and we could do it in a heartbeat.

So, what’s the problem? It ain’t the capability, it must be the materials. Oops, talk to Boral, Holcim or Hanson, or even Mr Wagner in Toowoomba, and they’ll tell you they will find and manufacture enough concrete to do whatever you want done. These are innovative, progressive and dynamic organisations in business that produced up to 30 million cubic metres of concrete last year. My bet is, they could double it if they were given the opportunity.

So it’s not material and it’s not machinery. It’s not know-how. Okay, it must be money!

According to the ABS reports, the Australian taxation revenue at all three levels of government are about $550 billion per year. That’s the 2017-2018 taxation level on Australian citizens and collected by Commonwealth, state and local government.

It’s a mighty figure! Surely they could spare a humble $30 billion to drought–proof the country? When we ask politicians these questions, they, good men and women, look sheepish and talk about competing priorities (sporting clubs, or is that unfair) and the time it will take to get approvals and state government co-operation.

To hell with the state governments. If they won’t come to the party, raise the money some other way, charge the states for the water you produce from the dams, or alternatively, just take the capital costs straight out of their GST.

Mr Morrison did a mighty job of recovering from this year’s Christmas holiday beat up by getting deeply involved in the fire season recovery. We admire him and the work he did. He suggested it was time the firies got some kind of federal leadership that would standardise their equipment so that the states can work together. There were moments on the fire front where the equipment from one state didn’t interface with the equipment of another. It sounds like a no brainer!

If Mr Morrison can take a federal approach to fire, why don’t we do it to water? Let’s use the power of the government, and the Nationals in particular, who are all committed to supporting regional Australia and get moving!

Imagine that, $550 billion in taxation and we can’t get around to providing water security that will be the foundation of the country’s wealth, development, and our children’s and grandchildren’s future for the next 50 to 100 years!

So what can we do?

To quote our American cousins, “write to your Congressman”. Our politicians react to media attention and it’s media that influences public opinion. Do the best you can to raise hell about the subject. They’ve got the money, let’s see them use it for something productive and visionary.

It’s obvious to all of us that Scott Morrison is a good and able man. Instead of worrying about the next media attack trying to find some chink in his armour, he should just get on with it and “do a Trump”. Our politicians need to be bold. They need to be visionary. They need to do what should and could be done with this vast country.

When I first started looking at the finances of the country, I first thought that the major reason we couldn’t do it was financial. I thought, “how can 25 million people finance the development of the country of three million square miles?” Then I took a look at the mining industry and found that they produce 73 per cent of all product exports and are the mainstay of the country with only 240,000 of us providing that tremendous boost to the economy.

As the freest and most affluent people on the planet, we have the opportunity…we must take it. Send me your comments. Argue with me, debate it, I want to know where I am wrong as there must be some flaw in all of the arguments above or else, surely somebody would have provided water security by now.

This article is contributed by Warwick Lorenz, Managing Director of Australian Pump Industries. With an earthmoving background, Warwick understands the capability of the industry. The driver for this virtually “open letter” to the Prime Minister is driven by not only the drought but also the recent horrific fire season and subsequent deluge.