A $6 million project to construct almost two kilometres of new 500mm diameter wastewater pipeline between the suburbs of Bethania and Tanah Merah in Logan City, Queensland, has begun.

Roads and Water Infrastructure Committee Chairperson, Councillor Don Petersen, said the population growth in the city’s eastern catchment meant an upgrade of the local wastewater network had become a priority. 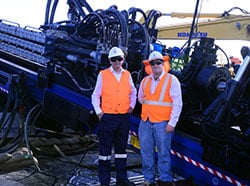 “There are a number of new developments nearing completion in Bethania and Waterford, and several more planned within the next few years,” he said.

“Current estimates indicate that upon ultimate development of the area, Logan’s eastern catchment will have grown by more than 55 per cent.”

“With this rapid growth in mind, council is making provisions now to ensure the local wastewater network can efficiently transport wastewater flows across the city for treatment.”

Cr Petersen said that as well as providing network capacity benefits for Logan’s eastern catchment, the new pipeline would free up much needed capacity within the nearby Beenleigh network.

Councillor Luke Smith said the new pipeline would be installed through government and privately-owned parcels of land in Bethania, Loganholme, and Tanah Merah using a variety of construction methods.

“Most of the pipeline will be installed via open trench, however where it crosses waterways and the Queensland Rail corridor, trenchless construction methods will be used.

“This includes installation of the pipeline across the Logan River via horizontal directional drill, and beneath the Queensland Rail corridor and other local waterways via pipe ramming,” he said.

The project will be managed by Logan Water Alliance – a team that has successfully delivered more than $200 million of new water and wastewater infrastructure for Council over the past five years.

All works are expected to be completed by May 2015, weather and construction conditions permitting.