Since valves are the number one source of leakage, those faced with reducing fugitive emissions need to look at the most challenging type: control valves. This article highlights some of these options for typical control valve features, characteristics and options.

Process plant managers have a host of good reasons to minimize fugitive emissions from their facilities and reduce the amount of process fluid released into the atmosphere and surrounding environment. Those reasons include keeping employees and neighbours safe, lessening the facility’s environmental impact, complying with increasingly stringent air-quality regulations, optimizing the plant’s energy consumption and maximizing plant operating efficiency.

Industrial valves are a leading source of leakage from typical process plants. In fact, studies of refineries have shown that valves and relief valves account for about 75{87a03eb4327cd2ba79570dbcca4066c6d479b8f7279bafdb318e7183d82771cf} of fugitive emissions.

Because of this reality, monitoring, controlling and reducing valve leakage can make a significant impact on overall plant fugitive emissions. Of particular concern are control valves, which pose a greater challenge than other industrial valves because of their typical operating mode and potential leak paths. There are, however, techniques, technologies and strategies that plant owners and managers can implement to better manage fugitive emissions from the control valves in their facilities.

Figure 1 shows a cross-section of a typical globe valve or linear operating valve, with the key potential leakage locations highlighted. The process fluid is contained within the valve body, which is a pressure vessel designed in compliance with standard pressure vessel codes, such as American Society of Mechanical Engineers (ASME), Deutsches Institut für Normung e.V. (DIN; in English, the German Institute for Standardization) or Japanese Industrial Standards (JIS). 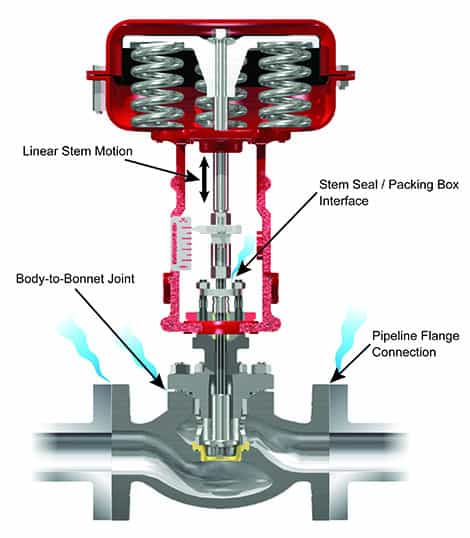 There are several static joints or locations interfacing with the valve body where external leakage is possible, including the pipeline-flange connections and the valve-body-to-bonnet joint. Leakage at these joints is uncommon because of the static nature of these joints and the fact they are typically sealed with gaskets and then bolted together. Leakage is still possible, however, so these joints should be monitored.

The primary valve leak path is the stem-seal interface, which is typically sealed using packing installed within the valve bonnet. This is a dynamic interface, as the stem moves up and down through the packing box area during operation.

Control valves are typically applied in continuously throttling services to maintain a specific set point or operating range for different process variables, such as pressure, temperature and flow rate. As a result, the valve packing wears over time, allowing more leakage across this interface. In addition, thermal expansion and contraction caused by the process fluid and ambient temperature changes can further increase the leakage rate. Thus, the packing must be periodically tightened or fitted with some kind of mechanical compensation, such as “live loading” the packing with springs to maintain the seal integrity and control leakage to the atmosphere.

Another key contributor to packing wear in globe-style control valves—and, thus, another source of potential fugitive emissions—is the presence of foreign particles or debris in the surrounding atmosphere. Since the globe valve strokes in a linear motion, the valve stem moves up through the packing area as the valve opens and then moves back down into the packing area as the valve closes. As the valve cycles from open to close, a portion of the stem is exposed to the environment, creating an opportunity for particles to attach to the stem surface and potentially impact the packing wear rate and sealing capabilities. These particles also can increase the operating friction, which reduces the overall responsiveness and controllability of the valve.

Figure 2 shows a cross-section of a typical rotary-style or rotating-motion-design control valve. As with globe-style valves, the pipe-flange connections and the stem seal area are potential paths for process fluid to leak into the environment. However, many rotary-style control valves have an integrated body and bonnet, eliminating that location as a potential leak path. A key advantage of rotary-style control valves in managing fugitive emissions is the rotating motion of the valve stem as the valve is opened and closed. The stem stays within the stem seal or packing area, minimizing the possibility of introducing foreign particles or debris into the sealing interfaces. As a result, these valves are typically more effective in reducing the possibility of fugitive emissions leakage, and normally deliver greater reliability and operating efficiency from this perspective.

A variety of factors, including government-driven regulatory requirements and the expansion of Environmental, Health and Safety (EHS) programs, have caused end users to place greater emphasis on reducing fugitive emissions. Regulatory standards were developed to control and lower fugitive emissions beginning in the 1960s, including the Clean Air Act in the United States and the TA-Luft requirements in Germany. Originally designed to meet regional or national environmental regulations and objectives, these sets of standards define specific test mediums, allowable leakage rates, test cycles and test methods.

The standards required industrial equipment suppliers, such as valve manufacturers, to evaluate, test and implement different sealing and packing designs to meet the specified fugitive emissions levels. The typical control valve in use at that time could emit anywhere from two to ten times the acceptable levels stated in these regulations, depending on the valve design, packing type and material, and operating conditions. To meet the new standards, control valve manufacturers developed low-emissions packing designs, including live-loaded constructions for globe-style valves and simple o-ring seals for rotary-type valves (Figure 3).

In 2006, the more stringent ISO 15848-1 was introduced as a low-emissions standard specifically for industrial valves. That standard includes various classifications and emissions levels for the potential leak paths described above. Specific to fugitive emissions, ISO 15848-1 sets maximum allowable emissions levels, testing procedures and type-testing criteria. Type-testing certification implies that compliance to the standard is based on the qualification test results for that type of stem seal or packing. The majority of the standards fall within this category as illustrated in Figure 4, which is a comparison of the most widely applied standards today—ISO 15848-1, ISO 15848-2, TA-Luft and ANSI/FCI 91-1—with respect to various test parameters and requirements. The one key exception to the testing requirements is ISO 15848-2, which also requires production testing to verify compliance.

Many end users are still trying to comprehend how the ISO standard applies to them and how to best implement its provisions into their facilities. At the same time, end users who already adopted the ISO standards are moving up the allowable leakage chain and implementing technologies that meet Class B, or even Class A, leakage rates, which compares to the Class C rates they may have previously reached for similar applications.

Several factors are driving this increased investment in reducing fugitive emissions. One is that regulatory fines for exceeding emissions limits have increased dramatically. But also, many end users are enhancing their EHS programs to protect the health and safety of employees, neighbours and the environment. Fugitive emissions reduction is often an important part of that enhancement.

Control performance is directly related to the amount of friction created within a control valve assembly by the dynamic interfaces, including the valve stem and the stem seal or packing interface. Key factors that determine the amount of friction include the frictional coefficients of the mating parts, the dynamic surface conditions (including the impact of any foreign debris) and dynamic operating clearances dictated by overall alignment and the thermal expansion and contraction of the various components.

Teflon-based packing designs are attractive choices because they typically operate at lower friction and require less adjustment to maintain leakage rates. In higher-temperature applications, however, graphite or a similar material must be used, resulting in significantly increased friction and the need for more frequent adjustments.

However, there are ways to compensate for wider temperature and pressure swings while maintaining the dynamic clearances required for effective control and for meeting low emissions requirements. These include live loading the packing box, applying zero leakage designs such as bellows seals or creating a redundant sealing construction. These types of stem-sealing systems also minimize the need for manual adjustments—a key consideration in light of the leaner maintenance staffing found in today’s plants. The following are key factors that should be considered when specifying technologies to manage fugitive emissions:

Local Conditions and Process Fluids: The location of a facility can play a significant role in determining the potential for harmful fugitive emissions and, therefore, the appropriate strategies for managing them. For example, the gas produced in places such as Iraq, Azerbaijan and the Caspian Sea contains much higher levels of potentially harmful impurities, thus operations there require more stringent emissions control standards.

Equipment Accessibility: Valves installed in remote locations or hard-to-access areas will be more difficult to monitor and adjust, thus use of self-compensating stem sealing systems should be carefully evaluated.

Interchangeability and Field Upgrade: Another key consideration in selecting low-emissions solutions is the interchangeability with the supplier’s standard packing or stem sealing options. Field upgrades may be required in existing plants to meet the latest regulatory requirements. Because of this, minimizing the amount of changes and rework is of high importance for ease of implementation.

Implementing methods of adjusting the packing tightness to compensate for changes in operating conditions can minimize leakage, though some level of fugitive emissions will still exist. Zero-leakage designs, such as a bellows seal, should be used when a process involves extremely harmful or potentially lethal process fluids. But implementing these solutions throughout an entire plant would be extremely cost-prohibitive. To balance safety and economic realities, plant personnel should employ the best low-emissions sealing solution possible and support it with an effective emissions monitoring system.

When most plant mangers hear the term “emissions monitoring,” they think of a manual process in which a portable analyser is used to take periodic measurements around all installed equipment. This is a time-consuming process, and with smaller teams of in-house maintenance personnel available, completing the tests frequently enough to meet regulatory requirements can be challenging.

The monitoring process can be automated, however, using a concept similar to the diagnostics capabilities offered by digital valve positioners. A series of sensors can be mounted on the valve assembly, which monitors fugitive emissions from the various leak paths and communicates the data directly to the digital positioner. The fugitive emissions limits or parameters for the specific plant or application can be compared by the positioner, which can then communicate any status reports or warnings back to the control system. As with any diagnostics tool, the accuracy of the sensors is critical, as is the ability of the positioner to convert the data collected into clear and easily understood actions for the plant operator.

For many solid reasons, fugitive emissions currently are under a bright spotlight. Since valves are a primary source of those emissions, it only makes sense to begin emissions management and control efforts with this part of the facility. Thankfully, today’s monitoring technologies, stem sealing techniques, packing designs and other advances can be powerful tools in assisting plant operators in meeting these challenges moving forward.