We need fresh water to survive but two-thirds of our planet is covered with salt water so an obvious solution seems to be to remove the salt from the water that is readily available to make drinking water. Most states in Australia have recognised the importance of purifying seawater using reverse osmosis technology and have desalination plants either operating or under construction in an effort to drought-proof our nation. 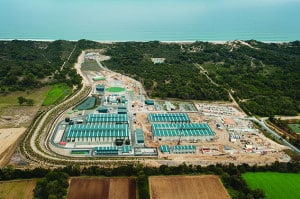 ABB’s drives and motors surpass the energy efficiency requirements of Western Australia’s new Southern Seawater Desalination Plant whilst it pumps seawater which is converted into 50 billion litres of fresh drinking water for Perth residents annually. This, combined with the existing desalination plant based in Kwinana, ensures that more than 30 per cent of Western Australia’s water supply will come from climate independent sources.
The first stage of WA’s latest desalination plant was officially opened in September 2011, three months ahead of schedule and within the $955 million budget, ensuring an ongoing climate independent water source for West Australians. This new plant, the second for the west coast, is located between Binningup and Myalup, south of Perth and the desalinated water will be fed into the existing Integrated Water Supply Scheme (IWSS). The IWSS pumps fresh water into Perth’s metropolitan dams which supply residents with high quality drinking water.
To achieve the optimum operating efficiencies, the Southern Seawater Alliance (SSWA) awarded ABB the contract to supply nine identical 800 kW 3.3 kV drives to power and control the main reverse osmosis (RO) and seawater intake pumps for the desalination plant following a competitive tender process.
SSWA are mindful of the ongoing environmental impact of a desalination plant on the local area and hence, all aspects of engineering design on the project required the highest possible energy efficiency performance. This exacting standard also ensures the site will continue to have the lowest possible environmental impact into the future.
In order to prove the high levels of energy efficiency offered by ABB, the motors and ACS 1000i variable speed drives were thoroughly tested and achieved results which not only met, but exceeded the customer’s rigorous energy efficiency expectations.
John Kutniewski, medium voltage drives specialist for ABB in Australia said, “in our initial tender, we quoted an efficiency of 96.1 percent at maximum operating speed and the results of the testing carried out at our drives factory in Turgi, Switzerland revealed the efficiency was 96.4 percent.
“The ACS 1000i model is a fully integrated standard drive which includes an 11,000 volt input transformer. This combination is an unbeatable solution for pumping stations in the water industry. By employing our drives on the pumps instead of throttling, SSWA’s energy bill can be reduced by as much as 60 percent for the RO and seawater intake pumping applications.”
“In addition to being efficient, the drives include key interlocking to prevent opening of the inverter power sections while the drive is energised. ARC-Guard and output isolators were also included to address site operation and maintenance requirements without increasing floor space.”
The desalination plant has also ordered five ABB 750 kW motors to operate in conjunction with the ACS 1000i Drives and the pumps manufactured by FlowServe which will be operating on site. ABB has been working with FlowServe to test their drives and motors to ensure they will achieve maximum efficiency with the customers chosen pump supplier.
Additional to the drives systems provided on this project, ABB has also supplied low voltage switchboards, motor control centres, power factor correction equipment and transformers. All products have been designed with the aim of delivering reliability, lower operating costs and minimising life-cycle costs.