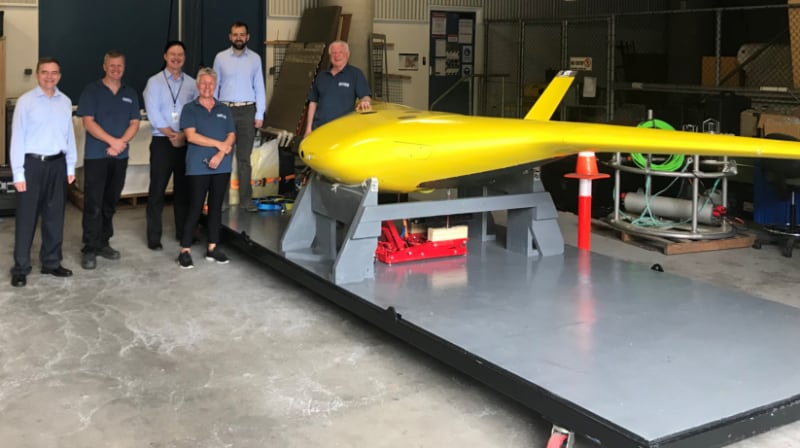 Ron Allum Deepsea Services (RADS) delivered the vehicle, which was designed, developed and tested under a Defence Innovation Hub Contract. The total cost of the project was $2,882,000.

RADS, an Australian SME specialising in the design and manufacture of custom underwater vehicles, worked collaboratively with Defence Science Technology Group’s Maritime Division to develop a detailed system specification, design the optimal shape and undertake a demonstration program to verify the project’s objectives.

Defence developed the Flight Control System to provide the vehicle’s autonomous control which was integrated into the RADS design of both software and hardware elements.

Deep Ray’s potential for deepsea use was demonstrated through a range of agreed performance criteria, including depth capability, stability, buoyancy, manoeuvrability, durability and endurance. Additionally, the glider included the ability to carry a range of Defence payloads.

This demonstration phase was ultimately to verify Deep Ray’s potential as an autonomous system for frontline remote area undersea acoustic surveillance and determine feasibility to progress to prototype development.

In addition to Deep Ray’s demonstration results, this innovation program also resulted in the registration of two patents by RADs which included the vehicle’s shape and its balanced piston pump.

RADS Managing Director, Ron Allum, said, “Although the test and demonstration program was limited due to schedule limitations, Deep Ray has demonstrated its potential as an autonomous system with capability for depth, manoeuvrability and payload that would benefit from further testing and development.

“The next phase would allow deep water trials of the Deep Ray Vehicle thus verifying the vehicle’s manoeuvrability, endurance and control beyond simulation and analysis, and enable prototype design and development.

“This phase would complement Defence’s initial investment into the Deep Ray vehicle.

“It aligns with the 2020 Defence Force Structure Plan, which prioritises investment in emerging technologies including a focus on the adoption of autonomous systems for undersea warfare.”