While sometimes referred to as motor current signature analysis (MCSA), which involves the collection of motor current data only, electrical signature analysis (ESA) utilises both voltage and current data, including values, phase impedance, power harmonics, and other information that can provide a solid look at the condition of both electrical and mechanical components upstream and downstream from the electric motor.

This means that ESA will provide you information on the health of your electrical system, motor, driven equipment and even further into the process off of a single set of data. Pump systems can be easily evaluated, including cavitation, flow, impeller, and even seal issues, whether the motor and pump are directly coupled, the impeller is mounted on the motor shaft, or even in those unusual belted applications. While a little more complex, ESA is effective in inverter applications, regardless of whether the variable frequency drive (VFD) output is pulse width modulated (PWM) or multi-step.

In this article we will use the example of two 30 horsepower lightly loaded submersible pumps. The abilities of ESA technology stretch across all pump sizes and voltages. The machines tested were two 30 horsepower, 1,800 RPM, 60 Hz, 460 Vac, 39 Amp pumps, one in distress and one in good condition, tested unloaded. They each have 44 rotor bars and 36 stator slots. When performing ESA, this information is vital for accurate analysis and, when possible, knowledge of the number of vanes in the impeller. The applied technology is an ALL-TEST Pro® II ESA data collector.

A few basic points on ESA/MCSA

Current fast fourier transform (FFT) spectra of amplitude versus frequency are a direct result of variations in the magnetic field, as the rotor moves within the air gap of the motor both torsionally and radially. As shaft material is ‘elastic’ and bearings have clearances, as vibration from the motor can cause the rotor to move side to side within that air gap. As most issues in a rotating machine are repetitive, such as unbalance, there are distinct frequencies that exist on top of the current sine wave. The results in an evaluation are based upon an amplitude modulated (AM) signal which has, by definition, sidebands as opposed to vibration signatures, which have single peaks for specific signatures.

The signals are processed in pretty much the same way as vibration analysis spectrum, as well as a variety of power quality and waveforms, including shaft torque. The result is an FFT signature pattern that can be analysed for anomalies that have a mathematical relationship, in most instances, and recognised patterns for which the reasons are still being explored. In the application of pattern recognition it is not unusual to find a multiple of a running speed signature, then start looking throughout supplied information and drawings to determine what that multiple represents. For instance, a result of ‘47’ might relate to rotor bars in the motor, or some other issue within the system.

In vibration, the noise that results from cavitation, a raised noise floor based upon a great many peaks, can often hide other important signatures. ESA has a similar signature, however, cavitation tends to occur in very tight bands around related impeller signatures. Most other signatures of interest remain visible to the analyst including the running speed. The impeller signature has been found to reside as two peaks around 5Hz and 15Hz in virtually all pump applications.

The reason for the raised noise floor is that cavitation relates directly to the significant energy that occurs as gases in the fluid being pumped come into contact with surfaces such as the impeller and collapse, putting off significant energy. This represents enough energy to remove small amounts of material from these components as well as damage seal surfaces. As these ‘explosions’ are random, they result in a very random vibration pattern that are related to the impeller. As noted in Figure 1, the raised noise floor is occurring on either side of the line frequency peak at about 5Hz. A good pump with minor issues

When taking data and a known good machine is available, it provides the ability to compare it to other machines. In this case, the two unloaded 30 horsepower submersibles are readily compared in order to contrast a good and bad machine. In Figure 2, the complete low frequency spectra can be analysed to evaluate conditions related to the motor shaft and impeller. In Figure 2, the top spectra is the RMS current of the pump in question, the middle spectra represents the frequencies immediately surrounding the line frequency, which is the highest peak, and the bottom spectra is the demodulated low frequency spectra. The RMS current represented here indicates that the machine is running smoothly without too many variations and is turned off at the end of the analysis. The peak to the far left and noise to the far right in the +/- 45-55Hz range on either side of the 60Hz line frequency, which would be +/- 35-45Hz in a 50Hz environment, is a seal frequency. An existing peak in this range normally means some seal wear, in a mechanical seal. If these peak continue to rise, it normally indicates failing seal surfaces. The remainder are all under -65dB from the peak current, indicating no other issues. Figure 3. Testing for static eccentricity in the high frequency spectrum.

The three red vertical lines in Figure 3 relate to the running speed times, the number of rotor bars and then line frequency sidebands around that point. This is directly related to static eccentricity. As noted, the lines do not fall across these peaks and, instead, these peaks relate to line frequency harmonics as multiples of the applied 60 Hz.

Figure 4 relates to the torque ripple at running speed of which there will be some level in most applications. In this case, the torque line is nearly flat with little variation, meaning that the motor is running relatively smooth. The small amount that exists comes from a variety of conditions from fluid flow to power harmonics.

Contrast a pump with major issues

A second pump is operating suspiciously and requires a comparison. Like the good pump, it is operating lightly loaded. Unusual vibration and noise are detected. When comparing Figure 5 to Figure 2, it is immediately apparent that there are significant differences. There are a series of peaks surrounding the line frequency peak and the RMS current is very choppy. By comparing the seal signatures between the two figures, it can be seen that a seal issue may occur soon and the high peak close to 5Hz, which has a raised noise floor in the middle spectra, means that something is going on around the impeller. The harmonics that are seen that are direct sidebands of this frequency often indicate some kind of impact or rubbing. In the case of the second pump compared to the first pump, Figure 6 shows definite static eccentricity, which means the motor rotor is running to one side of the stator. In fact, the situation is a little more serious as shown in Figure 7, which indicates running speed sidebands around these peaks and dynamic eccentricity, or orbiting of the rotor within the air gap. While rather low, it is still present which may indicate a bent shaft or some other condition that is causing the rotor to operate off centre.

Figure 8 is the torque ripple at running speed which is surprisingly low. This can help the analyst come to the conclusion that something is happening at the impeller that is causing some level of rub and is either the result of a bent shaft, indicated by the dynamic eccentricity, or that the rubbing impeller is causing the dynamic and static eccentricity, such as if it were loose or crooked on the shaft. In either case, there is justification for removing the pump from service. 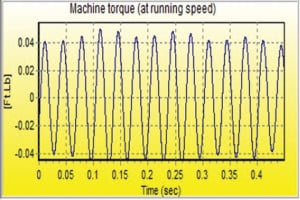 In the examples relating to the good and bad submersible pumps, the bad pump could be identified with or without the data from the good pump. However, a direct comparison between the two, or even if we were comparing a pump to itself over time, would indicate the severity of the issue. One of the key advantages to the use of ESA is that the load on the machine does not matter. The analyst is only required to compare the amplitude of existing peaks directly to peak current and voltage.

ESA is a very powerful tool with a single reading taken from a motor control center or disconnect being able to supply data from incoming power to driven load. While it is not a replacement for vibration analysis, it becomes a valuable tool in improving troubleshooting and trending times significantly and, when used along with other technologies, allows a rapid response to potential problems within a facility. Just this fact alone will often cost justify the addition of ESA to a maintenance or reliability staff’s arsenal.

Howard W Penrose, Ph.D., CMRP is the president of MotorDoc LLC, the Executive Secretary of the Society for Maintenance and Reliability Professionals (SMRP) and the Institute of Electrical and Electronics Engineers (IEEE) Dielectrics and Electrical Insulation Society (DEIS) Web-Editor-in-Chief and Power Engineering Society Materials Subcommittee Webmaster. He has over 30 years experience in the electric motor and related machinery industry, starting with the US Navy through to machine repair, design, hybrid vehicle design and electric machinery system forensics. He has won numerous awards for consulting, training and publishing including his books Electrical Motor Diagnostics: 2nd Edition and Physical Asset Management for the Executive. MotorDoc LLC is an SMRP Tier 1 Approved Provider of Electrical Motor Diagnostics and Motor Management training programs. Howard can be contacted by email at [email protected] or through his website, www.motordoc.com.