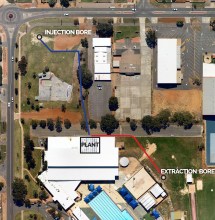 Stage two of the new geothermal system at the Aquarena in Geraldton, WA, has commenced with the new infrastructure to be installed and commissioned by the end of February 2015.

Work began on the installation in late 2014 and new pipework and heat pumps are currently being installed.

The innovative system will reduce the Aquarena’s gas consumption by up to 70 per cent per annum and will generate costs savings in the region of $84,000 annually.

Along with the reduction in gas consumption, the geothermal heating system will also have a significant impact in reducing CO2 emissions with an average annual carbon offset of approximately 108 tonnes.

The project has received generous funding from the Department of Resources, Energy and Tourism as part of the Community Energy Efficiency Program (CEEP).

The contract for the final stage of the design, installation, and commissioning of the heat pump system was awarded to EVO Industries Australia Pty Ltd at a cost of $507,750.

EVO have an experienced background in geothermal heating systems, having recently completed a similar system for the City of Fremantle.

The total cost for the energy efficiency project is just over $1 million. This includes the installation of variable speed drives, pump upgrades, pool blankets, and water wise technologies.

CEEP have generously provided a grant of $795,822 for the works. The remaining funding has been provided by the city. The combined energy efficiency upgrades will see a positive return to the city after three years.

City of Greater Geraldton Mayor, Ian Carpenter, said this was the second renewable energy project for the city.

“The Geraldton Regional Art Gallery underwent an air-conditioning upgrade last year using a geothermal system and it has proven to be extremely efficient,” he said.

“Not only are the money savings a bonus but this technology has a positive flow on effect to our environment which makes this a positive long-term investment for the city.”

This project complements the second stage of the maintenance and refurbishment of the Aquarena.