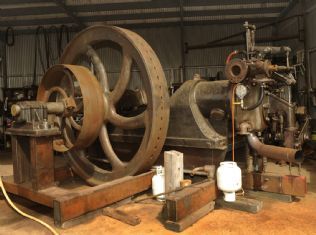 The restoration of the Hornsby pump engine included a 10 tonne flywheel cylinder gas producer and a Robinson 20 inch centrifugal pump, believed to be first used a century ago on Captain Keat’s Cobramunga property.

The engine was generously donated by Grant McDonald, a Murrabit district farmer from a NSW property on the Murray River, is the only one of its kind in the Southern Hemisphere.

Member for Swan Hill, Peter Walsh, said the addition of the historic engine provided a unique attraction, making the museum a drawcard for tourists.  “With more than $291,000 in funding support from Regional Development Victoria (RDV), the Benjeroop Irrigation Museum brings to fruition a project that survived the floods of 2011 and incorporated passionate involvement from local volunteers,” Mr Walsh said.
“The fully operational pump equipment revives a colourful local history showing how the region was once irrigated, before the introduction of electric power lines.”