From humble beginnings to dramatic expansion

Since the relaunch of the Tsurumi product range in Australia four years ago, the results have been nothing short of astonishing. When Aussie Pumps began supplying Tsurumi Pumps, the company found that Tsurumi’s reputation was well known by pump specialists but not necessarily by users such as farmers, consultants and even mine engineers.

“We knew the quality and standing of Tsurumi internationally and shared a desire to make the brand a market leader in Australia. This would match the standing and reputation the product already has in North America, Europe and South East Asia,” said Aussie Pumps Chief Engineer John Hales.

Tsurumi has spent 91 years becoming the world’s number one manufacturer of electro-submersible pumps with an annual production capability in excess of 1.4 million units. This story charts the progress of the dynamic Japanese company.

The company started out in 1924 as a manufacturer of agricultural vertical shaft pumps. The primary function was for applications in paddy fields and Japanese horticulture. By 1951 the company had grown into Tsurumi Manufacturing Company Ltd and had produced a two-stage vertical shaft pump for construction dewatering use.

That evolution of agricultural pumps was a huge breakthrough for Tsurumi. It introduced them to the construction market, a vital industry during the rebuilding of post-war Japan. 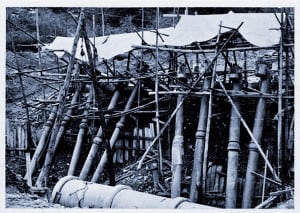 In 1955 the company launched the first electro-submersible pumps, the EP Series. Now there was no stopping Tsurumi.

With that technology and a booming domestic market, the company threw itself into the development of a range of new products. This included a newly developed lightweight dry type motor series. The dry motors replaced the conventional oil filled motor, with major features and benefits for users. By 1965, the submersible pumps incorporated built-in circle thermal protectors (thermostats) to protect the motor from overheating.

During this period of rapid growth the company opened an Osaka sales office and a separate branch in Tokyo. In 1965, a Sapporo sales office was added in Hokkaido, and another sales office opened in Fukuoka (on Japan’s island of Kyushu).

In the early 70s a major breakthrough in the introduction of a solids handling impeller was achieved by the company. Unique to Tsurumi at the time, the company introduced the concept of a vortex style impeller which enables the passage of solids without clogging or excessive wear on the pump end.

By now Tsurumi, guided by Mr Tsujimoto as President, was sensing that there was a world outside Japan for the company’s products. In the early 70s Tsurumi started exporting through trading houses and entered the European, North American, South East Asian, Australasian and Middle East markets. That explosion of activity was generated by the company’s quality standards, extremely competitive prices and innovative designs.

By 1979 Tsurumi had established subsidiary companies in Hong Kong, Singapore and the United States. To keep pace, a brand new factory was built on a green-field site in Kyoto. A new plant designed to dramatically increase productivity included an enhanced R&D department and test rigs capable of handling pumps big enough for flood mitigation and municipal sewage applications.

By now Tsurumi had come an awfully long way from vertical shaft agricultural pumps and had developed a range of dewatering pumps, slurry pumps, sewage pumps and even aerators. Driven by worldwide demand they provided realistically priced products that were deemed to be of a level of reliability not found elsewhere. 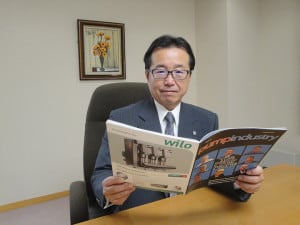 Today the Kyoto plant represents a massive development of manufacturing and engineering excellence. Modernized and developed using the most modern robot technology, the production capacity from this one plant alone is over one million units per year.

Tsurumi traces its beginnings back to the projects it undertook to improve the harsh conditions in Japanese farming villages, introducing vertical irrigation pumps more than 90 years ago.

During the rebuilding of Japan after the Second World War, Tsurumi was the first domestic company to establish submersible pump technology. During that subsequent period of high economic growth Tsurumi contributed to the expansion of many industrial sectors by assisting in the development of social infrastructure through water related urban planning and flood control projects.

The company’s capability enabled it to participate in major Japanese projects like the Akashi-Kaikyo bridge (between Honshu and Awaji Island across the Akashi Strait).

The philosophy of the company has always been to be ‘water and people friendly’. Tsurumi encourages creativity, harmony and passion from the President, Mr Osamu Tsujimoto, to staff. The staff are committed to facing the challenges delivered by changing times. The message for Australia

Australian Pump, a well-established and progressive Australian company, are absolutely committed to bringing Tsurumi to the market.

“Capitalising on the company’s engineering, production, and perhaps more importantly their philosophy, make them an unstoppable force in the pump business” said Mr Hales. “Working with Mr Tsujimoto and the Tsurumi team means we get incredible engineering support. A positive, progressive attitude and access to products that are built to quality standards means Australian customers receive the world’s best.”

Australian Pumps Tsurumi business has expanded dramatically since the establishment of a Tsurumi Pump Bank. This bank puts millions of dollars worth of Tsurumi stock at the disposal of Australian customers.

“Providing the combination of the best product, at the best price and short lead time is our goal,” said Mr Hales.

For further information including detailed catalogues, technical data and material on the huge range of submersible pump products visit www.aussiepumps.com.au or contact Australian Pump Industries on 02 8865 3500.