A 90-year old water pumping station in Sydney’s Centennial Park has been restored and had a new slate roof installed as part of a joint 125th anniversary celebration between Centennial Parklands and Sydney Water Corporation.

“In 2013 Sydney Water and Centennial Park had coinciding 125th Anniversary celebrations. To mark these twin celebrations, the two organisations sought a mutual project to develop – and the restoration of an historic pumphouse in Centennial Park was the outcome,” said Mr Stuart Dutton, Director Asset Management, Centennial Parklands.

“The building has been in great internal working order, but externally it looked very tired and had been the target of graffiti. Being so close in proximity to the beautiful Paddington Gates and Superintendents Residence, we had wanted to improve this building for a number of years. Thanks to Sydney Water this has now been achieved.”

The works involved cleaning the building, repairing the exterior render, restoring the steel framed windows and painting of the doors and metal work. The project also saw the replacement of the skillion iron roof (installed 20 years ago) with a conjectural reconstruction ‘hipped slate’ roof befitting the design of its 1920s origin was the final stage of the restoration, in line with heritage approval.

The building houses an original Venturi Meter that measured the water flow, as well as the modern telemetry equipment which provides a similar function.

“The restoration will enhance the heritage significance of the building by reinstating a roof similar to the original design”, said Paul Plowman, Sydney Water General Manager, Liveable City Solutions.

“Sydney Water has over 200 heritage listed assets which we actively protect for future generations to ensure that we maintain the liveability of the city” said Mr Plowman.

“Thanks to Sydney Water, we’ve delivered on yet another project that complements the Centennial Park Master Plan 2040 and continues to ensure that Centennial Park remains a world-class public park that we can all be proud of,” said Mr Dutton. 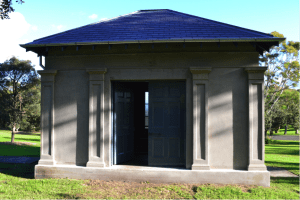