Investing in efficiency for the future of farming 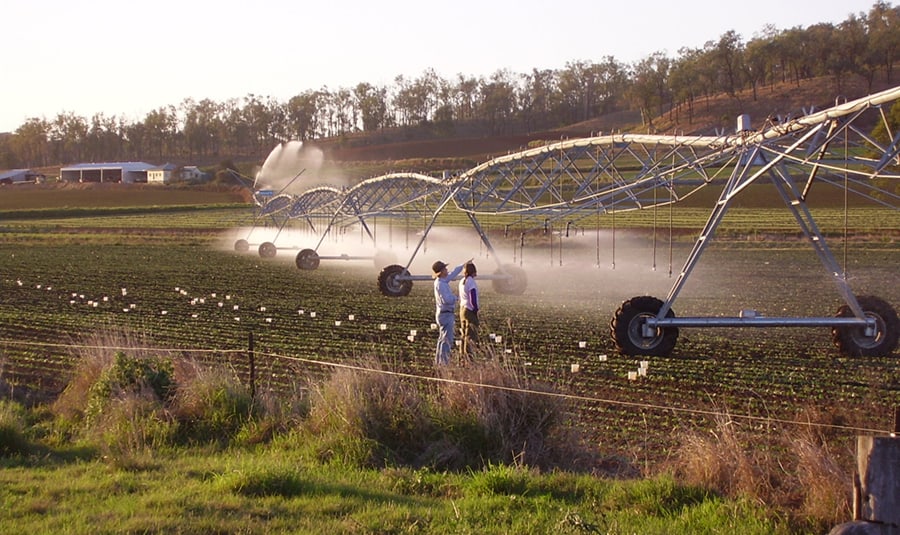 Life on the land can be tough, especially in times of drought. Water is too important to the operations of rural industries to be used inefficiently. The rural water use efficiency-irrigation futures (RWUE-IF) initiative is a partnership between rural industries and the Queensland Government that aims to improve the on-farm use and management of irrigation water. It also helps irrigators reduce the energy consumption of their pumping applications.

Through the RWUE-IF initiative, the Queensland Department of Natural Resources and Mines provides grants to industry groups throughout rural Queensland. The groups then use these funds to develop programs to improve irrigators’ water and energy efficiency.

The Queensland Government has allocated $8 million to the initiative over four years (starting in July 2013). RWUE-IF operates across the state, except in Queensland’s section of the Murray-Darling Basin, which is already covered by the Healthy HeadWaters program.

Priority is given to areas where improved water efficiency is most immediately necessary, such as those where water allocations are reduced.

The overall aim of the program is to make the Queensland irrigation sector more competitive, profitable and sustainable and help it take advantage of various reforms such as water trading.

The stated objectives of RWUE-IF are to:

• Engage with irrigators and others through mechanisms that maximise participation in the program.

• Secure benchmark levels of production per megalitre of water.

• Encourage the involvement of the irrigation agribusiness sector in the program so it can improve the technical capacity of on-farm products.

These objectives are achieved largely through the assessment of irrigation systems and the promotion of high-standard developments and technologies.

Irrigation Australia and the National Centre for Engineering in Agriculture also support the industry programs by fostering the development and uptake of new technologies and practices in the irrigation sector, and improving the technical capacity of service providers.

Some of the ways these groups assist irrigators include:

• Conducting assessments on irrigation and pumping systems to determine their efficiency and to identify where water and energy savings can be made.

• Offering financial incentives to irrigators to encourage them to make system and practice changes.

• Providing advice on managing agricultural wastewater, including the management of nutrients applied through irrigation.

All the industry programs funded through RWUE-IF involve assessing irrigators current irrigation systems in order to identify where efficiencies can be realised. This involves examining distribution uniformity and hydraulic performance.

Generally, irrigators receive a report generated from these tools along with advice on inadequacies in the system and potential solutions.

When the need for new pumping equipment is identified in an assessment, the industry groups dealing with irrigators don’t recommend specific brands of pump. However, they do specify a duty range and local retail outlets for the irrigator to pursue.

So far over 400 assessments of the hydraulic performance and energy consumption of irrigation pumping systems have taken place. When the recommendations are implemented, the recommended changes can achieve energy savings of up to 70 per cent, with the average achievable target around 40 per cent.

According to a spokesperson from the Queensland Department of Natural Resources and Mines, there are a number of inefficiencies that are found quite frequently.

For instance, the irrigation systems of many farms often display poor uniformity of distribution.

Another common problem is pump inefficiency or performance shortfall caused by:

• The wrong pump being used for the required application (e.g. the pump not matching required duty, variable rate pumping used where duty is constant or alternatively not used where there is varying duty).

Energy efficiency is another challenge. One project in the Burdekin, targeting efficient in-furrow irrigation by reducing set times, has reportedly resulted in energy savings of more than 35 per cent.

Case study: designing a centre pivot to balance energy with the capital cost

The farm in question was set up in the late 1970s to operate 4½” travelling irrigators with 400m runs and lane spacing of 80m. In its day, this design was considered efficient, as the focus was given more to the drill lengths for cultivating and harvest operations.

The farm’s current owner recognised that he needed to update this irrigation system. His main motivation in doing so was the potential energy saving this change could deliver. Therefore, he had a centre pivot installed using the existing distribution system, then decided to call in an expert to review the design.

The assessment found that using the existing mainline, the required system capacity could not be achieved at peak demand without irrigating during peak power costs.

System capacity is an essential consideration during the assessment progress – along with power tariffs, water availability on controlled systems, mainline delivery systems and pump suitability. In this case, a 9mm per day application rate was set as the target.

• A centre pivot using the existing infrastructure would need to run for 14 hours per day at 40 L/s with reduced pump efficiency well below the BEP to 40 per cent. Pumping cost for off peak for 462 hours at $0.12kWh = $2761.46 and 126 hours at $0.22kWh = $1380.73, a total of $4142.19. With this scenario however, the application efficiency of the pivot has been compromised as it will have a very high instantaneous application rate at the end of the machine which exceeds the infiltration rate of the soil. The farmer was able to negotiate with his energy supplier for a lower tariff between peak and off-peak that allows him to run the system longer.

• A centre pivot and upgraded pumping system to match the duty with a constant use tariff of $0.17 per kWh. The pivot is operated for 22 hours per day at 25L/s. Replacing the pump could achieve a high efficiency at the duty point of 75 per cent, and the pumping cost has been reduced to a total of $2505.42 to irrigate the 22ha.

The last option was implemented, and the pumping system was changed to a 100×65-200 ISO pump coupled to a 22kW motor.

This resulted in a saving of approximately $3234 per annum in energy alone. The new pump cost around $6800 (including upgrading the power panel for the smaller motor). Overall this is a not a bad investment over a typical life expectancy of 15 years, equalling around $450 per annum capital investment to save $3234.

Recent rises in energy costs mean that the savings continue to increase significantly.

After using the old 75HP (55kW) pump for so many years, the farmer was surprised that the smaller modern pump could run the pivot.

The next step in working with the farmer is irrigation scheduling, which indicates savings of one ML per hectare and more savings on energy costs.

The results demonstrated by the RWUE-IF initiative thus far highlight the substantial water and energy savings that can be achieved for irrigators by implementing best practice and ensuring the right equipment is being used for the right job and in the right way.

For an industry that relies so heavily on water, and where water use and the energy consumed by pumps make up a substantial percentage of costs, increased efficiency results in increased productivity, profit and sustainability. When water is restricted and as energy costs rise, rural industries cannot afford to be inefficient: an investment in efficiency is an investment in the future.

For more information on the program, contact the Queensland Department of Natural Resources and Mines on 13 74 68 or visit dnrm.qld.gov.au.