Irrigation innovation: putting water back in the Murray Record levels of government funding are providing local growers along South Australia’s River Murray with the opportunity to remain at the forefront of irrigation practice, while returning much needed water to the Murray­Darling Basin (MDB) river system.

The $265 million Federal Government­funded South Australian River Murray Sustainability (SARMS) program has been designed to achieve the industry­driven outcomes first sought by the Water Industry Alliance through the original River Murray Improvement Program, and is now being delivered on behalf of the Government of South Australia by Primary Industries and Regions SA (PIRSA).

In August 2013, a National Partnership Agreement between the South Australian and Australian governments was signed, which allocated a total of $265 million to SARMS, with the commitment to return 40GL in South Australian River Murray water entitlements to the Murray Darling river system over a six­year period.

Since then, 33GL is ready for return back into the river system. Funding opportunities for local irrigators are being awarded under the $240million SARMS Irrigation Industry Improvement Program (3IP), and $25million for regional development is being provided via the SARMS Regional Economic Development (RED) program.

On the provision that entitlements of water are returned to the River Murray, 3IP funding is giving local growers the ability to adopt innovative systems to improve their water and production efficiencies. A spin­off effect from the funding has also been noted in the form of a significant economic boost to the state.

“The requirement to give back water was something that needed to be done for the MDB plan, but it was seen as an opportunity rather than a risk. We explored ways to encourage irrigators to operate as businesses, rather than just as irrigators, and to explore what they could do to maximise their businesses and maximise what they could do for the state,” says Mr Roberts.

3IP is designed to deliver maximum and lasting benefit from the funding dollar to river communities through a competitive application process.

This will be achieved by encouraging optimised irrigation practices from South Australian River Murray Water Access Entitlement holders to return much needed water to the Murray­Darling river system.

The $240 million in 3IP funding is allocated through three investment streams:

The remaining $25 million has been used to support a Regional Economic Development (RED) program to deliver significant outcomes in regional research and economic development through:

The following two case studies are from major contributors to the South Australian agricultural industry. Each has successfully implemented 3IP funding to develop their irrigation infrastructure, and are already reaping the rewards of more efficient and practical systems. 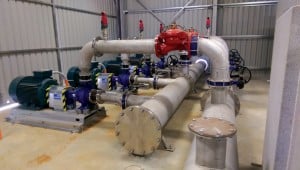 Jubilee Almonds, located at Overland Corner near Waikerie, SA, recently completed major pump and irrigation system upgrades across their orchards after receiving $5.6million of funding from streams one, two and three of the 3IP program.

Canopy low-­throw sprinklers were upgraded to a dual micro­sprinkler/drip system during replanting, and according to Jubilee Almonds CEO Brendan Sidhu, the benefits of the upgrade have been nothing short of impressive.

“As the ground at the orchard is very sandy and conducive to drift, initially our plantings were irrigated via low-
throw sprinklers. With the advancement of drip, we decided to replace the low throws with a dual drip and micro- sprinkler system.

“By introducing a dual system of both micro­sprinkler and dripper, the benefit is twofold. The micro­sprinklers enable us to establish cover crop to hold the soil between each tree, as well as helping to control frost during winter. With cover crop in place, the drip system is then able to be used to irrigate the trees as well as distribute fertiliser.”

According to Mr Sidhu, the orchard’s original system did not provide the orchard with a high level of water security.

“We originally had two 500kW electric pumps down at the river and a diesel booster pump installed at the orchard to boost water flow and pressure. Each of the pumps had to be started manually, and if one of the pumps failed, we would lose 50 per cent of our pumping capacity. If there was a power outage, we simply had no backup to keep the pumps running.

“The new system now involves four 280kW turbine pumps, meaning we would only lose 25 per cent of capacity if one was to fail. They are now also controlled by variable speed drives, giving us the capacity to run them at anywhere between 40L per second to up to 650L per second.

“The new system has enabled us to eliminate the diesel pump altogether and has provided us with a fantastic level of flexibility for different demands of water across the orchard.

“Mature plantings require far more water than young plantings, so this new system allows us to change the amounts of water delivered depending on our needs, and providing us with real water savings. As it is now fully automated, we can program everything from the orchard without having to go to the pumps. We also were able to install a plug­-and-­play generator if required.

“Overall, we have been able to increase efficiencies and we now have a system that is a lot more reliable,”said Mr Sidhu.

According to Mr Sidhu, he is proud of the program and was very happy to have been able to participate.

“SARMS funding is a great model and has been great for South Australia. It has not only benefited our almond production and water efficiency, but has also provided a boost for our local contractors.” 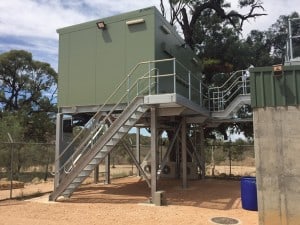 The control room for the Jubilee Almonds irrigation system. It is set so the base is above the 1956 flood level.

Major irrigation infrastructure upgrades were recently carried out at the Byrne Lone Oak Farm, which neighbours the company’s Glen Devlin Vineyard at Devlins Pound near Waikerie.

These upgrades were initiated to allow for the production of new and diverse crops such as 800 hectares of Lucerne.

According to Rob Byrne, a partner in the Byrne Brothers family business, contracts to receive the 3IP funding were signed in 2014 with pump infrastructure undergoing installation in mid­2015.

“There were a number of different upgrades completed across the Lone Oak property. These included the installation of diversion pumps from the River Murray, installation of an upgraded rising main as well as a re­lift booster pump station and associated distribution mains with connections for centre irrigation pivots.

“Two 400mm vertical turbine pumps with vertical hollow shaft motors were installed alongside an original pump at the river.

“Four booster pumps, centrifugal in design and coupled with 75kW electric motors were then installed within our booster station located close to our main South Australian Power Networks (SAPN) connection. The 5km main distribution line was then upgraded including a part 450mm diameter pipeline with 200mm PVC underground ring mains.

According to Mr Byrne, the upgrades have resulted in large water efficiencies and an increase in pumping capacity.

“Pumping efficiency increased by eight per cent, from 78 to 86 per cent following the upgrades. Capacity was also increased via the 450mm main line, which transports the pumped water to the farmland,” says Mr Byrne. 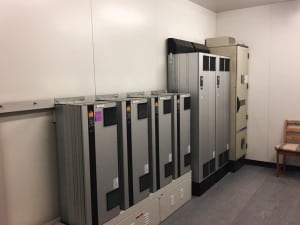 Variable speed drives and harmonic filters, part of the system.

Further benefits of the upgrades include the increase in production of other crops via shared farming agreements.

“The new upgrades have allowed for an increase in shared farming for potato production. Farmers avoid growing potato on the same land from year to year. Instead, they grow potatoes in rotations of three or more years, alternating with other ground cover crops.

“It is during the three-­year cycle, that we will be able to use the land to also plant Lucerne.

“Our centre pivot irrigation system on site is now also being fed via the upgraded infrastructure, and specialised software communicates between the sites.

“Our system is innovative in itself, with its design allowing for it to be moved from a circle to another circle area within two hours. This means we can irrigate up to three circles of Lucerne or other crops with one centre pivot.”

According to Mr Byrne, the upgrades have reached further than the farm and have provided tangible benefits for the community at large.

“With the support of SARMS 3IP program, we have been able to employ more people and improve their skill base by adopting new technologies.

“The funding has given us the freedom to be highly innovative in designing systems, and working with suppliers has led to greater conversations and activation of irrigation best practices.

“Although 3IP is a government recovery of water entitlements, the program seeks out best practice to bring sustainable agriculture to farming communities that improve crops and output,” says Mr Byrne.

The benefits of 3IP so far 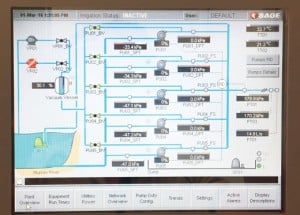 PLC control for the irrigation system.

According to Ben Fee, PIRSA Agribusiness Manager, the benefits of 3IP funding are widespread and have already resulted in impressive innovation measures and significant water returns.

“Just one example is the energy savings generated through the installation of the latest industry-leading pump technologies within the SARMS 3IP funded Irrigation projects, which will provide productivity benefits to around 200 irrigators. Many of the funded projects have also factored in future technology advancements in the area of solar power, which they are now able to easily introduce without further significant capital expenditure as a result  of their SARMS 3IP project.

“The SARMS National Partnership Agreement seeks the final water returns to be made by March 2017, with the program well on target to meet this goal.”

The MDB is defined by its water, involving 23 rivers and their catchments, yet less than 15 per cent of the area of the basin contributes to runoff – except in times of flood.

High evaporation rates, expansive floodplains and significant water diversions for towns and agriculture mean that much of the surface water in the basin does not reach the ocean.

As three quarters of Australia’s irrigated crops and pastures are grown within the basin, numerous programs have been put in place by government and authorities to help secure the future of Australia’s most precious water system.

The River Murray is the lifeblood of the Murraylands and Riverland regions of South Australia. With the area home to 70,000 South Australians and $840million worth of irrigated agriculture, the River Murray supports industries such as vegetables, grains and livestock in the Murraylands, and irrigated horticulture (fruit, nuts and grapes) in the Riverland.

Water returns will aid in keeping the Murray Mouth open and flush salt from the system, while meeting salinity and water quality targets to protect the Coorong, Lower Lakes and the river channel, and provide environmental flows to River Murray wetlands and floodplains.