It was five years ago today…

It was sometime before 2012 when I first had the idea of a pump magazine. I’d worked on various titles serving industries like water, oil & gas, energy and infrastructure, and one of the most common themes I kept coming across was pumps.

Whatever the industry, people needed pumps and used pumps. But if they wanted to get information about the pump industry, or communicate with pump users, there was no single channel they could use – and thus the idea for a dedicated pump magazine was born.

The next step was to get in touch with the PIA members. Over the course of a month in July 2012 I tried to call pretty much every PIA member to pick their brains. A lot were pretty uncertain about whether the concept would work, but the key message that kept coming up was to make sure it went to, and was read by, the end-users and specifiers of pumps across all industries.

The PIA membership itself consisted mainly of pump manufacturers and suppliers, so we had to look more broadly to build our audience.

“As an active member of the PIA, supporting their new magazine was fundamental. Having a magazine specific for the pump industry was going to be a significant resource for the industry and five years later, it continues to be one.

“Sharing our knowledge through writing articles every edition, informing readers about new products, showcasing our abilities and continuing our reputation as a key player in the pump industry have all been benefits of being involved in the magazine.

“The magazine covers all levels of industry, from the Pump School to the technical articles and the project articles, there is something of interest to read in every edition. Being directed at the pump industry, every edition is a key read at all levels in our organisation.”

Armed with the advice of the members, who told me that we needed reliability engineers, rotating equipment engineers, hydraulic systems engineers, hydraulic consultants, building managers and maintenance supervisors reading the magazine, we set about researching every mine, oil & gas plant, power plant, council, wastewater treatment plant, major building and even every irrigation store in the country. At these places, we found the relevant people that should be reading the magazine, and built our audience from there. We worked on not just getting our magazine to the right people, but also on ensuring they actually read it by investing in creating content that is relevant to them.

We spoke to a representative sample of people to find the key issues they were interested in and made sure that we based the content of the magazine around their interests – not just the interests of the pump suppliers.

One of the common themes that came up in these conversations was the fact these people had often studied pumps a long time ago, and now dealt with pumps along with a wide variety of other pieces of equipment in their daily lives. As a result, they were keen to see content centred around technical basics and other primers, to help refresh their knowledge.

From day one, this has always been a key theme of the magazine, and the daily tracking and research we conduct into reader behaviour shows that this content is, and always has been, among the most popular featured in our magazine and website.

We were very pleased to have an audience of over 2,600 from the very first issue, and have since seen our print circulation climb over 4,000. We also launched the magazine online from the start, building a strong audience with the newsletter and website from day one.

“SEEPEX Australia began operations around the same time as Pump Industry magazine. I was introduced to Chris Bland by a former work colleague and after speaking with Chris it became obvious that the magazine was a good platform for helping SEEPEX to establish our direct presence here.

“We often receive enquiries from previously unknown contacts as a direct result of our magazine advertisements and editorials. The subscribers to Pump Industry magazine appear to be made up largely from our targeted potential customer base.

“What I love about the magazine is the variety of articles and editorials, and also the ability to access both online and hard-copy versions.”

Now, in 2017, we reach at least 22,000 people each quarter across our print, digital and social channels.

In 2014 the PIA celebrated 50 years and it was a particular joy to be able to publish a supplement in the magazine covering this history. 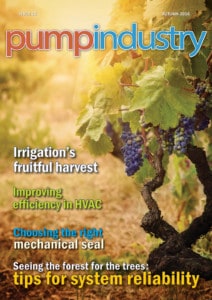 After its publication, I was surprised and pleased to hear from Bob Pullen, who let me know that he had actually published his own Pump Journal in 1968. He was kind enough to share some original editions and I was amazed by the quality of the production, particularly given the lack of technological resources that we take for granted today in the world of magazine production.

In 2015 we continued to expand the range of offerings and launched the first Pump Industry Capability Guide, an annual publication and integrated website to help better inform pump end-users about the offerings of Australia’s many innovative pump suppliers.
Over the past few years we’ve also expanded our offerings and now act as a full marketing agency for a number of companies in the industry, helping manage their marketing and create unique content, custom newsletters, social campaigns, websites and more.

“Hydro Innovations wanted an advertising platform that accessed potential customers across a broad spectrum of end users. Pump Industry seemed as though it could deliver on this front.

“We have had plenty of customers point to the fact that they saw something in the magazine that showed them that our product could be of benefit to them.

“It is a good quality magazine with well written and pertinent articles.” 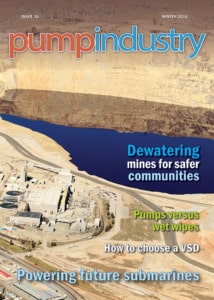 In recognition of the PIA and the industry’s long history, we decided to feature a “Pump Pioneer” interview in each edition. Over the years we’ve spoken to life members and other industry stalwarts about their life and their career in pumps. I was particularly pleased to be able to meet and interview industry legends like Bob Moore and Antony Grage in our early editions, both of whom have sadly since passed away.

In the past five years, Monkey Media has launched a number of new magazines in areas like utilities and infrastructure, but as our first publication, Pump Industry always holds a special place in our hearts.

I want to thank all of the PIA members and executive for their support over the past five years, and in particular Keith Sanders and Ron Astall.

Here’s to another five and many more beyond!

“It was the intrepid Chris Bland who made the initial move that started Pump Industry – he contacted the PIA with his plan for a pump magazine, and wanted to know if PIA would support it. We were impressed by his ideas and vision and to be honest felt that we had nothing to lose and everything to gain.

“There really was a synergy from the beginning and PIA have been thrilled by the coverage and the quality of the magazine. I recall (perhaps the devil made me do it) introducing Chris at a PIA function as ‘Bland by name, but not by nature’, which on reflection was a bit cheeky but I think the analogy is pretty true.

“Pump Industry is seen by PIA as a high quality platform for the Australian pump industry, not just in Australia but overseas as well. I was personally surprised to see a copy of Pump Industry on an engineer’s desk at a New Zealand oil refinery. The engineer in question ragged me about it being ‘my’ magazine due to my editorial role and photo, being PIA president at that time.

“That aside, he said it was the only pump related magazine that he would normally read from cover to cover because the articles were good and not just recycled product advertorials as is often the case in trade related publications. We are receiving similar feedback locally. The PIA is also impressed by the way Pump Industry has accurately reported PIA initiatives and events.

“What I personally enjoy about the magazine is the fact that there is always a good technical article to read, and I also get to read about other players in the Australian market and some of the personalities.