Kevin Wilson has had a long and successful career in the Australian pump industry. Since joining FN Bethune at the age of 20, Kevin has worked at Kelly & Lewis, BTR Australia, and the Weir Group, and is now the Secretary of the PIA. Here, Kevin reflects on his rapid career progression, the changes he’s witnessed in the industry and the memorable mentors he’s had. 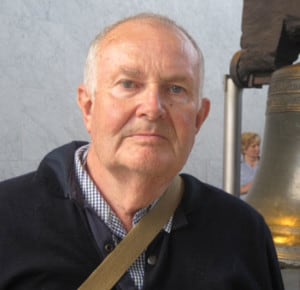 Starting out in the industry

My life in the pump industry began in 1965 when, at the age of 20 and studying Mechanical Engineering at Preston Technical College, I joined FN Bethune as a Tool and Jig Design Draftsman – working under the guiding eye of Bert Webster, the manufacturing manager.

They were a strength in the industry at the time as they were a member of the Clyde group of companies and produced a wide range of pump products including Pomona Turbines, Aurora Centrifugal pumps and Morris Slurry pumps.

I didn’t realise it at the time, but it was at Bethune that I came to know several people who would go on to play a significant role in both my working and personal life, including Robert (Bob) Moore, who was the General Manager; Newton Reyment, the Financial Controller and Company Secretary; and Geoff Daniels, the Draftsman.

Weapons and drills in the army

At the time, the Federal Government had just introduced a two-year National Service program and I needed to obtain a role to support my engineering education. This would help me secure a future career if I was conscripted. Bethune advertised and I got the job.

As it happened, my number did come out of the barrel and I began a two-year stint in the Australian Army in April 1966.

During this time, my education included the use of weapons and drills, and a posting with the engineers, where I learnt construction and demolition skills. When I returned, I rejoined Bethune in April 1968 and continued in my role as a Design Draftsman during the day, with frequent stints in the pump test bay, alongside Barry Stevens, at night.

In late 1970, I left FN Bethune and joined Kelly & Lewis (K&L) as a Design Draftsman. The company’s general manager at the time was Bob Moore, and here I designed structural steel for the influent pumping station at Carrum.

This was a major project won by K&L from the Melbourne and Metropolitan Board of Works (MMBW) and the first of several large and successful projects undertaken by K&L during the eleven years I worked with them.

My career with K&L developed quickly and I became a Contract Engineer and successfully managed several large turnkey projects, including another for the MMBW – the North Road Pumping Station. This turned out to be a very profitable project and its success helped my career progression as I was appointed Contracts Manager.

Shortly after, I was made Projects Manager, responsible for tendering and contract-managing all large works undertaken by the company. Then I was promoted to General Sales Manager. After eleven years at K&L, I was approached by Alan Jackson to join him at BTR Australia as General Manager of their engineering businesses. This appointment required that I relocate, so in August 1981 my family and I moved to Sydney.

Working exclusively in the pump industry

I remained with BTR for almost seven years, during which time the company grew exponentially and acquired many large Australian organisations including Nylex and Borg Warner. My role was demanding and required extensive travel and long hours working across many disciplines.

In 1988, an opportunity arose for me to take on a new role working exclusively in the pump industry. I accepted a position with the Weir Group as the Managing Director of Weir Engineering – a subsidiary of the Weir Group based in Glasgow, UK. My brief was to grow the business, and it was a role I had been well prepared for thanks to my time with BTR.

One of our greatest achievements during my period with Weir was to work with the UK management to acquire the worldwide operations of Warman International, the most renowned manufacturer of slurry pumps for the mining and mineral processing industry. Kevin and his grandson Gus on the ride on mower.

The pump industry has undergone massive changes since I joined it in the mid 1960s. The old, traditional businesses such as K&L, Harland Engineering, Ajax Pumps, and many others no longer exist as standalone entities. Multinationals have consumed some, while others have restructured, merged or closed down.

From a negative perspective, the demise of local manufacturing began in the late 60s when the Federal Government initiated tariff reductions for imported goods, cumulating over time with the ultimate free trade agreements, and this has all but killed off the Australian manufacturing industry.

However, on a more positive note, there has been the introduction of CAD and CNC machinery, improved and more efficient pump designs, access to international markets, and increased international competition – in some case the integration of Australian entities with multinational corporations.

I can honestly say my career in the pump industry has been a joy and brought me many happy and memorable moments, the most significant being the numerous life-long friendships I have made with like-minded people in Australia and around the world.

Without a doubt, the most influential person in my career has been Bob Moore. Bob was inspiring and supportive, and even when he was at the pinnacle of his career he would always have time for a kind and encouraging word.

Another memorable personality was Newton Reyment, the Financial Controller at Bethune. He worked from an office on the ground floor of the administrative building, when I was located on the opposite side of the building.

Newton had a loud and raucous laugh that resonated throughout the building, ensuring he was a well-known identity within the company. I hardly knew Newton when I worked at Bethune, as he was among the gods and I was a lowly draftsman.

At K&L, Newton resurfaced again in the UK working with Bob Moore. Again, he was lost from my career as it moved onward and upward at BTR and then Weir. Halfway through my time with Weir, I learnt that the young accountant who was wooing my daughter Jillian was none other than Newton’s son – I was flabbergasted. I soon got to know him extremely well, and we enjoyed the odd glass of wine and reminisced about our intertwining careers.

Furthermore, Ken Willcock, Alan Jackson, Sir Ronald Garrick, and John Hood were all highly regarded professionals in their respective fields, and each one helped me in some way to hone my skills in the pump industry.

Advice for the next generation

This industry has been a part of my working life for over 50 years and has provided me with great learning experiences, a myriad of technical and commercial challenges, and a wealth of colleagues and friends. All these things have ensured that I enjoyed a very happy and rewarding career.

My advice to young people in the industry is that they should obtain an appropriate qualification, seek employment with one of the major industry players, work hard to prove themselves, and continue to learn. Never stop learning and take all the opportunities that are presented to you.

With the population of the world expanding, it goes without saying that the need for pump products will continue to grow. The challenge is to find the niche that bests suits your skills and go for it.

From pumps to B&B Kevin with his wife Glenda.

The demands of working in a multinational company with 24-hour-a-day activities, and facilities in many countries, came with a heavy workload and continuous travel commitments. While I enjoyed a wonderful career, by 2003 I was ready to retire and take on something completely different.

With my wife Glenda, we retired to the Mid-North Coast of New South Wales and built a B&B on a ten-acre parkland. We remain here today and enjoy hosting people from around the world. However, despite being retired, I haven’t lost contact with the industry.

Since 2003, I have managed the operations of the PIA as their secretary. I’ve remained in close contact with many colleagues, and as the new breed takes over I am making a whole new circle of eccentric pump industry friends.

With these two commitments, it does not leave much spare time, but in our free moments we also enjoy travelling and visiting our children and their families. For a spot of leisure, we enjoy a stroll on one of our region’s pristine and secluded beaches, or a drive in the rainforests – it’s a tough life!