A major pump upgrade to the City of Logan’s largest wastewater pump station, involving 3D laser surveying and the reuse of existing pump station components, has won an industry award for its innovative design and cost-savings measures. 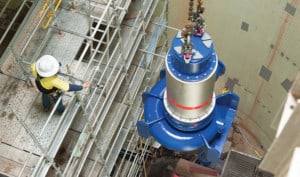 The Alfred Street Pump Station, located at Slacks Creek in Logan City, has operated since 1984, taking wastewater from properties to the Loganholme Wastewater Treatment Plant for processing. A $7.7 million project to upgrade the pump station and reduce the risk of wastewater overflows was completed by the Logan Water Infrastructure Alliance – a public and private sector enterprise comprising Logan City Council, Downer, Cardno, and WSP | Parsons Brinckerhoff.

The success of the upgrade was recognised when the project won the 2016 Institute of Public Works Engineering Australasia Queensland (IPWEAQ) Excellence Award in the water, wastewater and drought management category.

Principal Water Engineer Anthony Domanti led the design of project over several years and said that correctly selecting the new dry-mounted pumps was an important element during the design development of the project.

Mr Domanti said these pumps were selected based on certain criteria, including the ability to use the existing overhead bridge crane, and the ability to pump to separate discharge points.

“Upgrading the existing overhead crane at the pump station would be expensive and probably require the existing building roof to be raised, further adding to costs.

“Originally the Alfred Street Pump Station site was connected to a set of rising mains before discharging to the Loganholme Wastewater Treatment Plant. However, following a master planning review of the Logan North wastewater catchment, a new $50 million rising main (7km x DN1200) was constructed on a different alignment,” Mr Domanti said.

The new rising main is usually operated by SPS69 (one of two pump stations on site at Alfred Street complex), but the new pumps installed at SPS02 (the other pump station on site which was substantially upgraded) had to be able to operate effectively via this new conveyance direction.

The original pumps that were replaced were Thompsons, Kelly & Lewis 600/700 VS wastewater pumps.

These were driven via a line shaft from two speed motors mounted at the mezzanine level.

The Logan Water Infrastructure Alliance (LoganWIA) decided to reuse existing pump station components in the project, saving $1 million. Mr Domanti said the aim of this was to ensure value for money and reduce the impacts of major construction.

These opportunities included reusing the existing electricity supply including site transformers, substation compound and standby generator; maintenance of the existing bridge crane; the optimisation of existing buildings; and avoiding significant modifications to the pump station roof and overhead crane system (influencing pump selection). The project also avoided the construction of a new electrical control building by reusing an existing structure.

Other aspects of the pump station were also upgraded, including a new switchboard room which was built utilising existing space within the SPS02 building.

This also allowed the provision of current industry-standard facilities. Operations and maintenance personnel are no longer exposed to a potential arcing fault hazard and the asset now operates reliably.

“All mains cables were routed outside the building to avoid cable penetrations between the machinery hall and the new control room, which further minimised the risk of corrosive gas affecting the electrical system,” Mr Domanti said.

“The key features of the machine were its small footprint, it reaches 15m in height, and the turret, which rotates 359 degrees, thereby achieving full access to the upper section of the dry well,” Mr Domanti said.

In the end, the implementation of the EWP was five times cheaper than using conventional scaffolding.

Due to the limited as-constructed information available, 3D laser surveying was used to design the new pump arrangements, and understand potential operational issues and prevent them from occurring.

“Use of this technology for brownfield sites is more cost-effective than manual measurement processes which are error prone and require a greater length of time to complete,” Mr Domanti said.

The reliable 3D survey was used for all aspects of design development, such as confirming the exact pipework lengths, obtaining difficult-to-reach measurements and ensuring safety in design obligations were met. 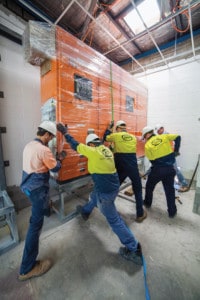 What can other contractors learn?

Mr Domanti said the innovative design and construction methods and the challenges of this project taught him several lessons that he now shares with young engineers and other project teams.

The top six things he took away from the Alfred Street Pump Station upgrade include:

Mr Domanti said the upgrade was a career-defining project for him, as well as those involved from Logan City Council, Downer, WSP | Parsons Brinckerhoff, and Cardno.

“It is appreciated when your team receives an industry award. It’s like a ‘thank you’ for all the effort, long hours and innovation that goes with meeting the challenges of a project like this.”