Look at the pump

As previously mentioned, the pump elements include the pump, a drive adding energy to the pump, the pump seals and other supporting equipment. In this article we will focus on the pump and drive, specifically rotodynamic pumps driven by electrical motors.

The pump element supplies all the fluid energy to the system required by the process and the control elements. The pump drive takes power from an electric motor in which the electrical energy from the plant power grid is converted to mechanical power at the motor shaft.

The motor shaft is connected to the pump shaft where the mechanical power is used the move the impeller.

What is so nice about a centrifugal pump is that it always operates as described on a pump curve. The pump curve provides a graph showing the pump head and efficiency as a function of the flow rate through the pump. 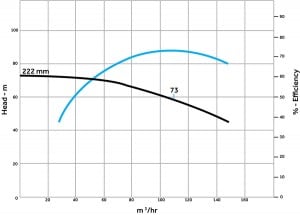 Figure 1. Example of a pump curve showing the head and efficiency as a function of the flow rate through the pump.

Figure 1 is an example of a typical pump curve; the data shown is for a 222mm diameter impeller taken at a rotational speed of 2950rpm.

The flow rate through the pump is entered on the x­-axis, the head developed by the pump is shown on the left y­-axis, and efficiency at which the pump converts the mechanical energy supplied by the pump shaft to the fluid energy is displayed on the right y-­axis.

Looking at this curve, with a flow rate through the pump of 100m3 metres /hr, we can see the pump develops 61 of head and has an efficiency of 75 per cent.

The pump head is not affected by the density of the process fluid. The pump curve is always tested with water at standard temperature and pressure as the test fluid.

One final point, the pump’s performance is stated in fluid head but plant pressure gages read out in bars. As a result, to determine the pump head, you will need to convert from pressure units to metres of head.

This provides us with basics of the pump curve. In future articles we will see how the pump and process elements work together to determine the balance flow rate through the system. After that we will learn about how to adjust the flow of the system using control elements.