The Snowy Mountains Hydro-electric Scheme is one of Australia’s most iconic engineering achievements. Completed in 1974, the scheme is now undergoing a $400 million modernisation program. The program is introducing advanced controls and protection systems technology across the entire Scheme.  Ageing and high maintenance plant components such as circuit breakers, high voltage transformers and cables are being replaced with modern components.  New turbine runners are optimising generation capabilities and improving efficiency of water utilisation and the Jindabyne Pumping Station is being upgraded. Major maintenance of the Scheme’s extensive trans-mountain tunnel systems, which deliver water from lakes to the power stations, is in progress to ensure the ongoing safe and reliable management of water utilised by the Snowy Mountains Scheme. Innovative maintenance techniques and engineering solutions for water conveyance tunnels are enabling future tunnel maintenance requirements to be substantially reduced.

2012 saw the completion of work in the Kosciuszko region. Jindabyne Pumping Station pumping units had their control and protection systems upgraded, In addition in 2012 Guthega Power Station, the oldest power station in Snowy Hydro’s fleet was also completed with the upgrade of its second generating unit. The outage of this unit commenced in late February and return to service occurred in August 2012. Unit 1 having been successfully upgraded in 2010. 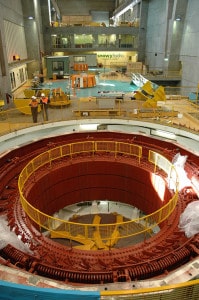 The major works in the Lower Tumut region were completed in 2011. The six generating units at Tumut 3, the largest Power Station in the Snowy Hydro fleet have all been modernised and upgraded with the turbine runners replaced, new governing, control and protection systems installed and all other mechanical and electrical components overhauled. The upgraded units at Tumut 3 are now capable of providing between 25 and 50MW of additional capacity each. Blowering Power Station control, protection, governor and excitation systems were replaced in 2009 to provide reliable remote operation. 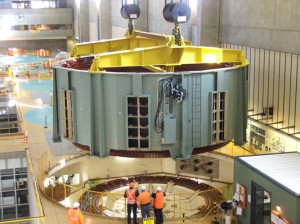 The initial unit upgraded in the Murray region, Unit 14 at Murray 2 Power Station was completed in early 2008. 2012 has seen a return to the region with the controls and protection upgrades in Murray 1 with Unit 8 completed in December 2012 and Unit 7 returning to service in early 2013. The control and protection upgrade outages at Murray 1 will continue through 2013, and 2014 until early 2015 when the last controls and protection upgrade and the first mechanical refurbishments of the Murray 1 Power Station is planned to take place. The contract for the design and purchase of the Murray 1 turbine runners has been signed with design of the first turbine runner under way and delivery of the first runner is scheduled to occur in February 2015 prior to commencement of the first mechanical upgrade outage. Pumping Station
The Snowy Mountains Scheme has one pumping station at Jindabyne and a pump storage facility at Tumut 3 Power Station. Jindabyne Pumping Station pumps water from Lake Jindabyne through the Jindabyne-Island Bend Tunnel to the Snowy-Geehi Tunnel at Island Bend and was completed in 1969.

The two pump sets at Jindabyne consist of a 25.4 MW synchronous centrifugal Pump capable of pumping 12.7 m3/sec at 189.3m head and an associated a 6.7 MW Induction motor booster/lift pump which pumps 12.7m3/sec at 48.8m head.

The upgrades focussed on improved condition monitoring to reduce maintenance costs and saw substantial improvements with the control, instrumentation and monitoring systems, mechanical and electrical protection relays and actuating devices and all associated cabling all being upgraded. Excitation systems were also replaced as part of the upgrade.

A Rockwell Control Logix system is now in place, supported by Areva and GE Relays for protection as well as various other field instrumentation.

The upgrades were carefully time to ensure the outage duration fit within the pumping regime.

The upgrades will provide a reliable and maintainable control system for motor control and starting as well as duplication of the protection systems to increase level of protection.

All of the major overhauls and upgrades have all been completed without significant injury or incident. Outstanding teamwork, dedication, and skill has been displayed by all involved, contributing to the successful implementation of a complex, high quality finished product. The project represents an investment in maximising asset value through increasing turbine capacity and efficiency, maintaining long term reliable operational capability and modernising the Scheme assets through replacing ageing technology.

About the scheme
The Snowy Mountains Hydro-electric Scheme is one of the most complex integrated water and hydro-electric power schemes in the world.

The Scheme collects and stores the water that would normally flow east and diverts it through trans-mountain tunnels and power stations. The water is then released into the Murray and Murrumbidgee Rivers for irrigation.

The Scheme took 25 years to build and was completed in 1974. More than 100,000 people from over 30 countries came to work in the mountains to make true a vision of diverting water to farms to feed a growing nation and to build power stations to generate renewable electricity for homes and industries.

Sixteen major dams, seven major power stations (two underground), a pumping station, 145 kms of inter-connected trans-mountain tunnels and 80 kms of aqueducts were constructed. Even before the Scheme was completed, it was named as one of the civil engineering wonders of the modern world.

The Snowy Mountains Scheme on average produces around 4,500 gigawatt hours each year of clean renewable energy for the National Electricity Market. In doing so, the Scheme prevents around 4,500,000 tonnes of Carbon Dioxide being released each year. That’s the equivalent of the exhaust from around 1 million cars.

Snowy Hydro is constantly exploring ways to enhance the Scheme through the addition of mini hydros at Tumut 3, Jindabyne and Jounama and upgrades of the existing operating plant.
The Scheme is operated and maintained by Snowy Hydro Limited.

Today, Snowy Hydro continues to play a vital role in the growth and the development of Australia’s national economy, by diverting water that underwrites over $3 billion in agricultural produce and by generating clean renewable energy.

Snowy Hydro currently provides around 40{87a03eb4327cd2ba79570dbcca4066c6d479b8f7279bafdb318e7183d82771cf} of all renewable energy that is available to the eastern mainland grid of Australia, as well as providing fast response power to light up the morning and evening rush hours of Sydney, Brisbane, Canberra, Melbourne and Adelaide.