In 2006, horse breeder Cathy Hains purchased a property in Burnewang North (Vic) because she wanted to breed and raise the best horses in the best area. The horses are grown on a nutrition program based on the property’s irrigated lucerne crops.

When the decision was made to dry off the Campaspe Irrigation District in 2011 through the Northern Victorian Irrigation Renewal Project (NVIRP), Ms Hains knew she had to find an alternative.

Her eventual solution was provided by the GMW Water Connections Project. 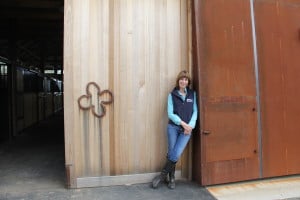 “We looked at many alternatives, including irrigation syndicates, but we were a little too far away from the Goulburn System so in the end we decided to investigate pumping from the Campaspe River.”

However, the challenges weren’t just access to water for irrigation. New, more efficient methods of irrigating pastures were also needed.

NVIRP had made the decision to decommission the channels because flood irrigation was slow and inefficient. Open channels had been losing water through evaporation and seepage and the sandy soils slowed the entire flood irrigation process.

It was also at this time NVIRP was merged into Goulburn-Murray Water (GMW) and the project to revolutionize irrigation delivery in Northern Victoria became the GMW Connections Project.

GMW Modernisation Coordinator, Mark Halden, was given the task of working with the team at Burnewang North to ensure they could be reconnected.

Together they worked through the on-farm works required to decommission open channels and to develop solutions to allow for water diversion from the Campaspe Weir.

“The move meant the property was moving from an open channel irrigation supply to a river diverter where the connection was an electric powered pump site with three pumps,” Mr Halden said.

The high pressure pump supplies the transportable sprinkler system and the low pressure pump pushes water to the pipe and riser irrigation system and can be used to fill a new 33ML recycle dam – enlarged as part of the farm’s modernization plans.

“The hard hose sprinkler system means we can irrigate more land than before,” Ms Hains said.

“And, while it is labour intensive because the sprinklers need to be moved all the time, we’re growing a very valuable product here. The hard hoses enable us to keep green “pick” for grazing and also minimize dust in very dry conditions.”

Ms Hains firmly believes the future belongs to people who “think of ways to move with it”.

“Old-fashioned irrigation methods are hard to sustain in tough economic and environmental conditions,” she said.

And thinking outside the box has provided many benefits to Burnewang North.

One 32ha section of the farm’s commercial cropping enterprise irrigated by the pipe and riser used to take 10 days to irrigate. Today, the same area can be irrigated in three days.

“These changes came at significant cost and the Government’s subsidy via on-farm water efficiency grants were instrumental in helping us update systems,” Ms Hains said.

In another section of land, 10ML of water would need to flow through the open channel to retain 4ML to irrigate with. Now, if 4ML is pumped through the pipe and riser system there’s, 4ML available for irrigation.

Ms Hains said they could now irrigate about 300 more hectares of pasture that was previously dry land.

“We continue to channel any available funds into these improvements across the farm,” she said.

“As custodians of this extremely productive property we hope to send it into the future with the best production capabilities we can provide and water is liquid gold.”

“This system has allowed us to put water on areas we never thought we could before,” Mr Foott said.

“Poly pipes and risers cut down a lot of night work and this frees up labour for other things.”

“With the old system I’d often be awake for 20 hours getting the watering done, now it’s all automated I can just set it on the computer and leave it… and I’m confident with that, I trust it.”