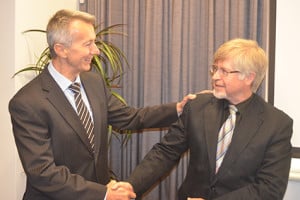 Previously serving as PIA Vice President, Ron was elected at the PIA AGM on November 22, which also saw the election of John Inkster as Vice President.

Both Ron and PIA Secretary Kevin Wilson paid tribute to outgoing President Harry Katunar, who is leaving the role as he will be soon taking up a position with KSB in Shanghai, China.

Kevin noted that it had been a very successful year for PIA under Harry’s leadership and wished him all the best.

The office bearer’s reports at the AGM all noted that the association was continuing to strengthen, with many successful events and publications in recent years contributing to that success.

The AGM was followed by the PIA Annual Dinner where members caught up in a relaxed atmosphere.