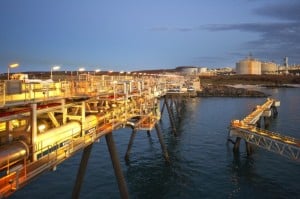 A better than expected performance from the Pluto LNG project has given Woodside record production and sales for the quarter, with production volumes of 26.5 million barrels of oil equivalent (MMboe)  according to results announced by the company.

In all Pluto LNG produced 1,112,179 tonnes of LNG and 851,102 barrels of condensate, and has been a reliable producer since its start up in March.

Other major projects are also progressing well for Woodside. The North Rankin A and North Rankin B control systems have been integrated and power generation is operating  on North Rankin B. Hook up and commissioning activities are ongoing. The project remains on budget and on schedule for completion in 2013.

Woodside has received the tender bids for the onshore and offshore infrastructure for the Browse LNG Development, including a large range of pump contracts.. An evaluation and disciplined assurance process is progressing to determine project costs and economics

The higher production numbers have resulted in a further increase in Woodside’s 2012 production target, which has been amended to a range between 83 and 86 MMboe.

The Pluto and Xena gas fields are estimated to contain 5 trillion cubic feet (Tcf) of dry gas reserves and an additional 0.25 Tcf of contingent resources. The initial phase of Pluto LNG comprises an offshore platform in 85m of water, connected to five subsea wells on the Pluto gas field. Gas is piped in a 180km trunkline to the onshore facility, located between the North West Shelf Project and Dampier Port on the Burrup Peninsula.

Onshore infrastructure comprises a single LNG processing train with a forecast production capacity of 4.3 million tonnes a year. Storage and loading facilities at the plant include two LNG tanks with a combined capacity of 240,000 m³, three smaller condensate tanks and an LNG and condensate export jetty.