At its simplest, a hydraulic system converts mechanical energy into fluid flow and pressure in order to complete a specified amount of work. In general, the less energy lost in this process, the more energy efficient the system will be. However, hydraulic systems often lose pressure along pipelines, which can have substantial implications for the energy efficiency and operating costs of the system as a whole. This article explores the concept of pressure recovery in hydraulic systems and presents a solution for energy recovery in pipelines with a siphon leg of more than 10 metres, through the use of a hydraulic turbine.

A hydraulic number line is instrumental when exploring concepts of pressure loss and recovery in a system.

However, to understand the hydraulic number line, it is useful to first look at a mathematical number line, which depicts the possible values of all real numbers (Figure 1).

The same basic idea can be applied to create a number line for hydrostatics, representing all possible pressure head values available to a hydraulic system (Figure 2).

However, unlike the mathematical number line, the hydraulic number line has a lower limit.

The values of the hydraulic number line refer to the pressure head, also called the static head, of a system. Pressure head is the internal energy of an incompressible liquid due to the pressure it exerts on its container, proportional to the height of an equivalent column of static liquid. Head is measured by length, typically metres. Although head refers to the height of a column of liquid, it has a direct relation to pressure: The reason for the lower limit

The lower limit of the hydraulic number line was defined by Italian physicist Evangelista Torricelli, best known for his contributions to hydrodynamics and his invention of the barometer.

Torricelli’s experiment involves filling a tube with liquid mercury (ρ = 13.6 kg/m3) and plugging both ends. One end of the tube is then placed in a basin, already filled with water, and the submerged plug is removed. At this point, some of the liquid will flow out of the tube into the basin until a point of equilibrium is reached.

The equation to calculate the atmospheric pressure is: The only variation in these circumstances was the size of the void or vacuum space created at the top of the tube. If the experiment is altered and the barometer is filled with water, the same thing occurs. Note: For the purposes of calculation, frictionless pipework and a vapour pressure of zero is assumed.

The calculated value of ten metres corresponds to the lower limit of the hydraulic number line, -10.

This means the air pressure outside the column is sufficient to drive water to a height of ten metres up the column. The space in the column above the water exerts no influence since there is zero vapour pressure. If the relation between head and water height is once again established, at nine metres above the external water level the pressure head will be -9m, a height of four metres up will correspond to a -4m head, and so on.

Applying the hydraulic number line to a hydraulic system 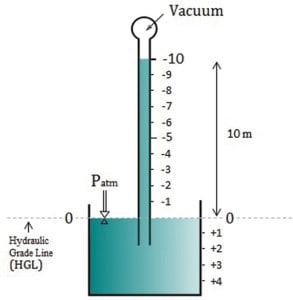 As the barometer displays, the hydraulic value decreases from zero moving up the tube and increases infinitely moving deeper into the tank.

A. For a hydraulic system with a siphon leg <10 metres

The application of the hydraulic number line principle is extremely helpful when calculating hydrostatic head (potential energy change). In a hydraulic pump system, total pump head equates to the linear vertical measurement of the height a specific pump can deliver a liquid at the pump discharge. The pump head can be calculated by measuring the differential head across a pump:

In order to calculate the pump head of a simple system, three simple steps must be followed.

1. Set the hydraulic grade line or baseline at a head of zero.

2. Assign the corresponding positive or negative head values depending on whether the system proceeds down or up, using the hydraulic number line and the same technique as with the barometer. This process of adding or subtracting head is continued throughout the system until the pump nozzle is reached.

3. Take the final values at the suction and discharge of the pump and subtract the two to obtain the total pump head (once again friction losses are assumed to be zero).

To further demonstrate the calculation of pump head, a simple hydraulic pump system can be examined (Figure 4). The example system has two open tanks filled to the same height (elevation), each with a depth of two metres, is open to the atmosphere, and has one pump and an inverted U-shaped configuration that extends to a height of eight metres. 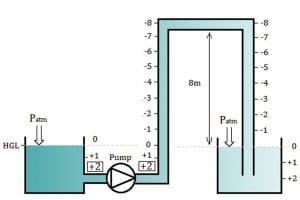 First, HGL is set to a head of zero metres. The second step involves moving from the atmosphere to the pump, tracing the path that is taken and determining pressure head at each stage. On the left tank, head increases two metres down to the pump, giving the suction head a value of +2m. In the right tank, the liquid rises eight metres from the water level, resulting in a head of -8m at the top of the system.

B. For a hydraulic system with a siphon leg >10 metres

Calculating the pump head of a taller system (i.e. >10m) results in a different answer.

However, the equation for calculating pump head itself does not change; it remains the differential of heads across the pump.

Consider a system, similar to the last, that has two open tanks with depths of two metres, except the system reaches a height of 18 metres instead of eight metres.

Follow the same steps as before to calculate the pump head of the system. Start with the system’s interaction with the atmosphere and set the elevation as a head of zero. Second, determine the pressure on either side of the pump. Note that the suction head has not changed from the previous configuration, remaining at +2m.

Above the maximum height of the water column, the vacuum extends all the way to the top of the system (Figure 5). Head remains constant at -10m until the elevation starts to drop in the downward leg and the weight of water is able to increase the pressure once more. This is evident on the other side of the U-shaped configuration where the vacuum ceases, and the head increases. The conventional method of counting proceeds from there and the pump is reached with a discharge head of +7m. The total pump head of this system is calculated to be +6m. This means that in order for the system to operate, the pump must produce a head of six metres. This value is obviously different from the pump head achieved in the previous system with a siphon leg of less than ten metres (Figure 4).

If the mass flow rate of the system in Figure 6 is 1,000 kg/sec and the pump has an efficiency of 90 per cent, then the pump power, Ppump, for this system can be calculated. 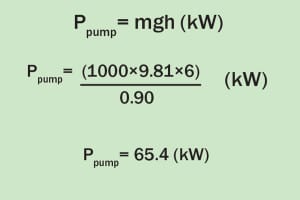 A. For a hydraulic system with siphon leg >10 metres

Now that we have examined the systems, the question remains of how this energy can be recovered.

Recovery can be achieved by introducing a hydraulic turbine. This will allow the system to capture work done by liquid falling onto the turbine. If the turbine is then connected to a generator or reconnected to the pump shaft, part of this energy can then be returned to the system.

In this next example, the turbine produces power at a +6m head differential (Figure 7). At the HGL, there is a head of zero metres, but since the turbine is placed at that point, head increases to +6m. The head continues to decrease by conventional counting, only reaching a value of -10 m at the apex of the pipe length and ending with a pump discharge head of +8m.

The work done by the fluid on the turbine is then converted directly to usable energy to the pump. As a result, some of the energy that would otherwise be lost is restored to the system.

The pump’s head value remains the same, but the energy required to produce that head is partly recovered by the turbine (note that in this example the pump and turbine are on a common shaft). Simply introducing a pressure differential by means of a turbine eliminates the vacuum region and allows you to take advantage of the work produced by falling water. A somewhat similar process occurs in certain turbocharger pressure recovery units in internal combustion engines.

To quantify the power saved by a pressure recovery turbine, the power generated by the turbine should be subtracted from the power consumed by the pump. In this case, both pump and turbine have an assumed efficiency of 90 per cent. 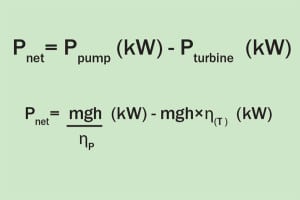 B. A real life application of a pressure recovery turbine

To look at how a pressure recovery turbine can be used in a real life application, we will use the example of a long distance pipeline (e.g. water supply lines to water treatment plants, mines, etc.). Commonly, such pipelines stretch many kilometres, over which they may encounter elevation changes greater than ten metres.

Consider the long distance pipeline in Figure 8, through which water is pumped from a reservoir to a local town ten kilometres away. The turbine is placed at the grade line of the tank. The system has a steady flow of 1,000 kg/sec along (assumed) frictionless pipes.

When this system is analysed using the number line principle the pump head is found to be 76m. For the sake of simplicity, the inlet for the pump is placed at the water’s surface so the suction head is considered zero. With 90 per cent efficiency, the power consumed by the pump is 829 kW. The head loss at the turbine is 67m. At 1,000 kg/sec, that equates to 592 kW of power generated.

This energy can then be fed into the local power grid for use by the community. Essentially, the turbine is recovering energy that would otherwise be lost. The turbine reduces the net energy loss of pumping water across long distances. Here there is a net power consumption of only 237 kW (829 – 592 kW), representing a substantial benefit to the operator.