As the mega CSG-­LNG projects in Queensland shift into their operational phases, Queensland Gas Company (QGC) is continuing the hunt for reserves, expanding its natural gas tenements in Queensland through Project Charlie.

With Australia’s LNG industry emerging from its construction boom, QGC’s new development, Project Charlie, aims to support Australia’s gas production through a $1.7 billion investment in infrastructure and wells, which will create up to 1,600 industry jobs.

Gas developed from Project Charlie will be available to either meet domestic gas supply commitments, or production needs at the QCLNG Plant on Curtis Island.

Development will involve construction of the following:

Once constructed, the new infrastructure will feed into the existing gas processing facilities at Woleebee Creek, just south of where the Charlie Field Compressor Station will be established.

These works are part of a continuous investment by QGC in its Surat Basin gas assets, which supplies gas to domestic markets as well as the Queensland Curtis LNG (QCLNG) facility on Curtis Island, which exports to international markets.

Project Charlie aims to ensure a continuous gas supply to QCLNG for export as well as QGC’s domestic gas customers.

QGC Managing Director Tony Nunan said “Project Charlie builds on the back of all the infrastructure we’ve put in place in phase one of the QCLNG development, and allows us to step out with our next lot of wells and a compressor field station.”

QGC and its parent company, BG Group, appointed CPB Contractors (formerly Leighton Contractors) as the main contractor for the project, and they began construction in late 2015 after the project received environmental approvals from the Federal and Queensland governments. 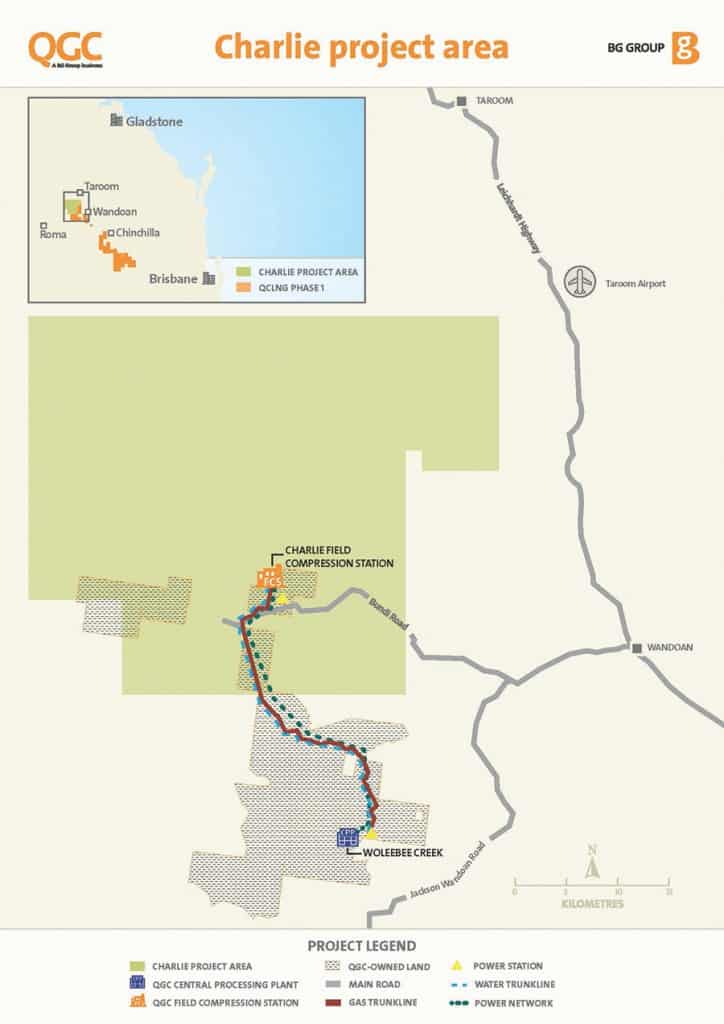 The development of the new wells, pipelines and compressor station will not only support QCLNG, but the investment will also create over a thousand jobs over the two­year construction phase, as well as ongoing operating and maintenance work once construction is complete.

“The Charlie development will help to sustain the benefits of our investment in local communities and the state, including up to 1,600 construction jobs and business opportunities during the two­year project,” Mr Nunan said.

“This is a vote of confidence in the secure, long­term future of Queensland’s natural gas industry, which will employ Queenslanders for many years to come.”

Local suppliers within the Queensland gas industry are also likely to benefit from the new project, including specialist engineering, design and fabrication business, Red Industrial, which currently delivers components to QGC assets in the region.

Project Charlie was named after the section of the block on which the largest part of the development will take place. This location and the area where the compressor station will be built, was chosen due to its land topography and its proximity to the existing and proposed infrastructure.

Once built, the Charlie Field Compressor Station (FCS) will compress gas supplied from the natural gas wells before being transported down a pipeline to the Woleebee Creek Central Processing Plant, to be further compressed.

The gas will then be transferred along QGC’s gas collection header to the export pipeline, which connects to the QCLNG Facility. This compressor station is anticipated to have a project lifespan of 30 years, including the construction period.

A critical element of any CSG project is managing the water that is generated through the gas extraction process.

The water pipeline being built as part of the project will transfer water from the Charlie regional storage pond with a tie in to the Phillip Intermediate Storage Pond, and then onto the Woleebee Creek aggregation pond adjacent to the Woleebee Creek Water Treatment Plant, where one or more existing ponds are used to balance associated water flows.

QCLNG was the world’s first LNG project to use coal seam gas and it joined the export ranks, with its first production in December 2014.

Since then, the plant’s first train has exported 62 cargos of LNG to overseas markets.

Commercial operations from its second train began in November 2015, after QGC assumed control of train 2 from Bechtel Australia, which originally built the facility.

QGC now has full control of both LNG trains at QCLNG and is investing in developments such as Project Charlie, to help sustain gas production and supply to the plant.

QGC operations involve the production of natural gas in more than 2,000 wells within the Surat Basin and Southern Queensland.

The gas produced is transported via a 540km pipeline to the Curtis plant for conversion to liquefied natural gas (LNG) and export to overseas markets. The Curtis LNG facility involved more than four years of development and construction work before it was operational.

By mid­2016, both trains at QCLNG are expected to reach a plateau in production, meaning they will be producing enough LNG for approximately ten vessels per month, or the equivalent of exporting around eight million tonnes of LNG per year.

The impact of Charlie

The QCLNG project is one of QGC’s major developments, and investment in more wells and advanced gas infrastructure aim to sustain the plants gas supply. Investment in more gas production facilities will also have an impact on domestic supply, as QGC supply gas to local markets for power generation.

Project Charlie’s two­year construction phase is predicted to provide a local boom for the industry in the Western Downs region and the development highlights that there is still current investment in Australian gas production and opportunities to support gas production for the future.

CPB Contractors began construction on Project Charlie in late 2015, and the development is expected to be completed in 2017.