Bill Aitken was making cannons for the Second World War before he discovered a love of pumps and has never looked back. While the majority of his career has seen him work at Harland Engineering, Bill has also travelled around Australia and worked with several other Victorian pump companies over his 50-­year career. Here, Bill reflects on his life in the pump industry and shares his thoughts on what the future holds for the industry. 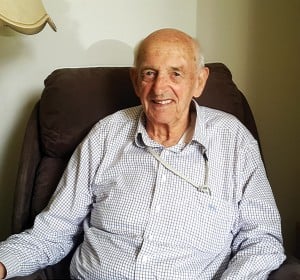 From cannons to pumps

In 1943, I left Preston Technical School and got a job at Harland Engineering. For about 18 months to two years, Harland was making 20 millimetre cannons for the war but switched to pumps when the weapons were no longer needed.

The factory was cleared out of all the machinery used to make the cannons and was converted into a place that could make pumps.

Our factory was an offshoot of Harland Pumps in Scotland, so we got the pump designs from them and started producing pumps in 1945.

From then on, we sold pumps to a variety of different places, from power stations to water utilities. Working at Harland, I had the opportunity to get into the nitty­gritty of pumps and this appealed to me. Since then I never looked back, I just always had to be working in pumps.

At Harland I was a junior craftsman and when we started producing pumps, I discovered that I really liked it.

This was because we weren’t just producing hundreds of the same item, there was lots of variation because we were making particular pumps that did certain things. This is what got me.

The other thing that I liked about the industry was that you got to meet lots of different people and I had the opportunity talk to the people who were actually using the pumps.

Some of these pump users I got to know really well, such as people who worked for the Melbourne and Metropolitan Board of Works.

At Harland, we sold pumps to people all over Australia so I also got to move around the country. This was quite interesting and I found that I really liked travelling.

I stayed at Harland Engineering, my first place of employment, for around 30 years, before moving on to work with other pump manufacturers.

After Harland, an opportunity came up to go to Ingersoll Rand in Dandenong and I jumped at the chance. I worked there for quite a few years, before moving to a manufacturer in Moorabbin. Then I got a phone call from

Ken Wilcock asking me to go and work with him at GAAM Pumps. We had a meeting and I decided that the opportunity sounded pretty good, so I moved there and that’s where I worked until retirement.

That’s the thing about all the jobs I’ve had – I always received offers from people to go work for them, so I never really had to officially apply. They all sort of knew me or knew someone that referenced me and thought that I would be good for their business.

Throughout my professional life, I worked at designing and adapting pumps for specific functions. I spent time troubleshooting at various locations around Australia and I travelled to Scotland and America for consultations and to learn and sharing expertise.

I retired in 1997, when I was at GAAM Pumps, after more than 50 years in the pump industry.

Changes over the years

I think the pump industry has changed tremendously. When I first started out at Harland, we only handled pumps that could pump water, and there were only about three of four different types of pumps.

They progressively got more advanced over the years. First there was the single stage pumps, which were driven by 10­15 horsepower motors, before multi stage pumps became more common and started being used in power stations and for pumping hot water.

I don’t think the variation of pumps has changed necessarily, but there is a difference in the things that now require pumping.

It can be expensive to completely change the way you manufacture a pump, but if you change the material, the impeller or the casing, you can extend the life of the pump.

You might make them in a different metal, or material, which is how pumps have progressed to be able to pump all the fluids that are now available. Basically, you had to change what you were trying to do, to suit the people who were using the pumps.

After the war, when the factory at Harland was converted to make pumps, a gentleman called Harry Tippett joined the company and taught me everything I know about pumps.

Harry knew a lot about pumps and how they worked, so when he started working at Harland, it was the best thing that ever happened as far as I was concerned.

He showed me all the differences between the types of pumps, how they worked, and how to cope with them if there are any problems.

Harry retired while I was still at Harland and I only saw him a few times before he passed away, but he was a great help to me when I started out.

I remember initially we got a lot of pump drawings from Harland in Scotland which outlined the sort of pumps they wanted us to make, and Harry knew what type of pumps they were just by looking at them.

He made me understand certain things about pumps and the industry that I hadn’t come across before.

Harry was a mentor to me, but another pump personality I worked with was Arthur Feiner, who moved from Harland in Scotland, and began working at Harland in Melbourne.

I used to do the drawings of the pumps, and at one point Arthur and I decided to change a few things on the drawings and show the bosses what we did.

I remember changing a few things to get the patents made differently, and the factory bosses thought it was pretty good.

The most significant development I’ve witnessed is the use of mechanical seals. Everyone might use them now, but they weren’t common when I first started.

These seals stop leakage and in this industry, when you’re pumping things like oil and petrol, you really can’t afford any leakage because it could be dangerous.

So people came up with these seals that could be made to suit whatever you needed, and could withstand a long duration.

A mechanical seal eliminated the use of stuffing boxes, and you got no leakage at all from them.

The future for pumps

I think the future will be very different for pumps than it is now, because there might not be as big of a demand for certain pumps. The biggest change will also be the increasing use of solar and batteries in energy production.

Energy will come from the sun and batteries; so you won’t need to have generators. Pumps, and the production of pumps, will be reduced.

Of course, there will always be a need to pump something somewhere such as water, but the power to drive it will come from the sun, not a power station. They’re probably going to scrub coal power stations in the next ten or 15 years as well, due to climate change.

If you are passionate about pumps and want to work in them, by all means do so, as working with pumps over the last 50 years has made for a very satisfying and fulfilling career. Just keep in mind, the industry is changing and will be very different from what it once was.

I retired from GAAM Engineering in 1997, when I was 70 years old, and was made a Pump Industry Australia Life Member in 2004.

When my wife died a few years ago, I moved into a retirement village which is quite pleasant, as I’ve got a two- bedroom house where I have people stay over. I’m getting a bit old for it now, but I like playing golf and

I’ve told my daughter that I would teach her to play golf, and we’ll just get a buggy for me to get around in.

I have three daughters and a son who I see mostly every week. One of my daughters visits from Bairnsdale and helps me in the garden, and my other three children live around Melbourne.

My son is the Managing Director of a business that designs computer software packages for other businesses, which is doing very well, another daughter is a school teacher and my youngest daughter has a business walking dogs.

Working with pumps over the last 50 years has provided me with a fulfilling career and many long lasting friendships in the industry.