Arthur Connor has had a long and successful career as an engineer, from working as a draughtsman at Kelly & Lewis Pumps to assisting in the building of Melbourne’s trains and trams. His efforts and significant contributions to the pump industry have also been recognised by the Institution of Engineers, Australia. Here, Arthur shares his story of his time in the pump industry and the big role it has had in his life.

An early start in pumps

Having successfully completed a Technical Certificate course at Swinburne in 1949, and having finished first in engineering and second to the Dux of the school, it was time to get a job.

Throughout the final year of my course I often looked out at the Kelly & Lewis (K&L) plant near the Springvale Station.

I knew nothing about the company or what they did, but I was fortunate to be introduced by one of my Swinburne teachers for an interview.

I started at K&L as an apprentice turner and fitter on the understanding I could transfer to the Drawing Office after three years to complete the apprenticeship.

However, three weeks after starting I was transferred to the Standard Pump Section of the Drawing Office, and as fate and luck determined, this held the opportunity for me to learn and specialise in a career involved with centrifugal pumps.

This ultimately took me around the world and helped play a part in K&L’s strategic development in the pump business over the years ahead.

In 1952, I was transferred to the Design and Development office, known as Central Administration (CA), based in the KL Electric Motors building on Springvale Road.

My job as a draughtsman was to assist in drawing the future range of K&L Model 50 mass produced standard pumps.

The model went to market as the “yellow” pump with replaceable bearing and shaft cartridge, developed for improved maintenance on farms, irrigation and industrial use.

It was the first mass produced range made in Australia using the latest in German automatic drum control machines.

The experience with the yellow pump inspired me to begin a Mechanical Engineering Diploma course at Caulfield Technical College which took eleven years of part time study to complete.

In the design group at K&L there was one person in particular, Andy Gasiunas, a Lithuanian immigrant, who became a key lifetime mentor and went on to inspire me to study hydraulics and hydrodynamics.

Through him I had an opportunity to learn the theory behind his designs and appreciate his foresight, which later enabled me to apply that knowledge to decide the best application of pumps and draught them into manufacturing drawings.

The next six years were ones of dynamic advancement and inspiration for me. As well as continuing my studies, I was able to learn much about hydraulic and mechanical design of pumps from Andy.

These were the most important formative years in my career involving pump design.

After the completion of my Engineering Diploma I became restless, and in January 1961 I applied for a sales position at the Shell Company of Australia and began my three month training course.

A few months later I was appointed as the Bitumen Representative seeking bulk bitumen and emulsion sales from councils and contractors, and in charge of the company Road Spraying Team for Victoria and Southern NSW right up to Hay.

The Shell sales experience proved valuable in “selling for Shell” and learning to deal with customers.

I enjoyed the role and was somewhat reluctant to go back to K&L. My return to K&L in 1962 arose due to Andy Gasiunas being appointed Technical Director of the Mather & Platt (M&P) Power Division based in Manchester, and I was to takeover his role as Chief Hydraulic Design Engineer at Springvale.

This was an exciting responsibility for me to undertake, especially my promotion within the Engineering Department and Drawing Office where I grew up and learned under some wonderful colleagues over the previous 12 years.

A winning design for a sewerage pumping station

One very memorable experience was a meeting with George Hauser, the Melbourne and Metropolitan Board of Works (MMBW) Engineer-in-Chief, and Geoff Archer at the MMBW offices just after release of the tender documents for the South Eastern Purification Plant (SEPP) to be built at Carrum in the south-east of Melbourne.

Geoff Archer, the Superintendent of the Brooklyn Sewerage Pumping Station built by K&L over the late 1950’s, knew all about the pumping operations and experiences with that plant and had previously talked about overcoming certain maintenance issues for the proposed SEPP Carrum pumps, but did not specify the preferred features of the new pumps, leaving that to tenderers.

As a result, during the meeting in George Hauser’s office at the MMBW, I asked what they most wanted with the new pumps and Geoff Archer nominated the most important issues as:

So, armed with this, I went back to Springvale and decided on a new design incorporating a double volute casing to balance out radial forces on the rotating element and a stainless steel impeller to eliminate electrolytic effects on the pump internals. 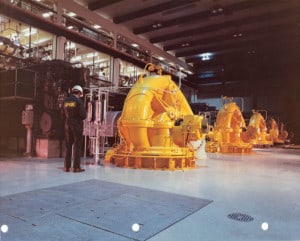 K&L won the contract and achieved all the desired benefits on test and subsequent installation, of which the MMBW was duly pleased.

In 1972 word reached us that Andy Gasiunas had passed away suddenly after catching a flu virus. He was solely responsible for introducing advanced hydraulic and mechanical design technology from the prewar age to the rapidly developing postwar age across the world.

In consequence he helped lift K&L Springvale and later M&P in the UK to global competitive standards.

Andy was my key mentor and engineering design inspiration during my working life.

Then came my 40th birthday, the 29th April 1973, a Friday. First thing on arriving in my office, I was invited to Harry Smith’s office in what was called “mahogany row”.

“How would you like to go to England?” Harry asked me. I asked, “What do you want me to do?”

He said, “Go to live there to be the Technical Director of the Power Division of Mather & Platt in Manchester and head up Research and Development, and Engineering to continue the work started by Andy Gasiunas”.

The task was a move up for me in taking up such a role covering the R&D work and supervising the current production of oil field applications covering transfer, tanker loading and high pressure seawater injection pumps.

I accepted the position and reported at Park Works plant in Manchester on 31 July 1973.

I spent much of the first year dealing with the test bay backlog which involved engineering staff in the workshop and understanding who in the Technical Department ‘made a difference’ in getting results. As well as my role in Manchester, I was responsible for liaison with the company’s plants in Johannesburg, South Africa, and India over product issues and application advice for new major enquiries. 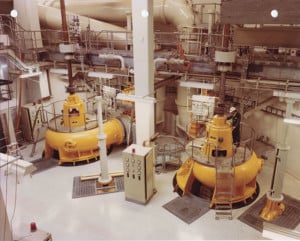 At the end of 1976, my family and I returned to Australia and set up in the managerial offices at K&L Springvale in the role of Group Engineering Director of the M&P global operations.

At which time Wormald International, based in Sydney, acquired the worldwide operations of M&P which included K&L.

As the early 1980s progressed in Australia, industrial disruptions increased in the metal industries, in particular, over Union claims for a 35 hour week, along with ambit claims for an earlier retirement age.

At the same time, the Australian dollar was rising in value and imported engineered products started to flow in to Australia and our once loyal independent State Distributor warehouses turned to importing many lines.

Then the Arbitration Commission ruled on a union push to have over award payments paid by manufacturing industries absorbed into the award rate of pay, meaning that overtime would be at higher rate driving up wage costs.

This had a devastating affect on the foundry industry, as most needed overtime capacity and not enough work to do to make double shifts viable.

The decision brought forward inevitable rationalisation and closures of some Machinery Group foundries.

Changing economic conditions, currency variations and globalisation of business since 1970 had brought big change to the ownership and success of the manufacturing industry in Australia and worldwide.

It became clear to me, much more would evolve over the years ahead, especially in Australia, bringing unexpected change.

At the time I was on the committee of the Metal Trades Industry Association (MTIA) in Victoria and was invited to discuss issues with the Government in Cabinet with Malcolm Fraser and
his ministers.

I was later invited to join the HEMA Committee in 1982, after being nominated by Jack Keegan, MD of Jaques, and commenced attending their regular meetings of key industry executives in Canberra.

I went on to become Chairman of HEMA for two years over 1984 – 85 and was invited to sit on the Metals and Manufacturing Council within the Labor Government’s Industry Council set up by Senator Button.

As an outcome of declining economic circumstances, Wormald embarked in a sell off of all Machinery businesses in Australia and around the world to fund their New York Stock Exchange listing and global expansion in fire protection and security businesses.

That, however, never eventuated, as Wormald themselves became the hunted and target of Asian investors and lost control of their worldwide company.

The M&P Manchester, K&L Springvale and Ballarat John Valve plants were all reduced to bare sites within three years.

The start of a new era

In March 1987, nearly three months after leaving K&L, I received a call at home in Kalorama asking if I would be interested in attending an interview for the position of General Manager at the rolling stock plant of ANI Comeng (formerly Commonwealth Engineering) in Dandenong.

The company had large contracts building Melbourne’s trains and trams, and was at the early stages of design to build Australia’s first large export contract for Light Rail Vehicles (LRVs/Trams) for a project in the New Territories of Hong Kong.

After an upsetting year throughout 1989 opening our doors to all and sundry, including all Australian competitors, and throwing our books open, we were forced to cut staff everywhere possible to reduce overheads.

The morale amongst the employees hit rock bottom; including mine. Totally exasperated, I handed in my resignation in November 1989.

I was drained emotionally and affected especially by the forced dismissal of many very good and long-term staff.

I was advised of a deal that the Swedish company ABB was near signing a deal to purchase the Dandenong Rolling Stock plant.

I was offered a three year contract to stay on, at the end of which I resigned in May 1993.

Some months later, my wife, Marie who supported me so well, and I moved to Queensland to enjoy life on the Sunshine Coast.

Following my retirement in 1993, I was elected a Fellow of the Institution of Engineers, Australia. This was great honour and one of which I am very proud.

I hope the many aspects of my life’s working experience, and that of the many brilliant colleagues and exceptional engineers and commercial staff I worked with in Australia, the UK, South Africa, and especially at the Pune plant in southern India, where I was thought of as their guru, was of interest.

I took great pride in helping them and they were very grateful. Any difference I made would not have been achieved without them and I remain very thankful.