Parallel operation may be required to meet variable demands, such as flood control, or to satisfy a temporary condition that occurs such as when changing over pumps in an uninterruptible process.

Figure 1 illustrates the characteristic of single versus parallel operation. Two identical pumps operating in parallel are capable of producing twice the flow of a single pump at any given Total Dynamic Head (TDH). However, the actual flow rate realised in the system is dictated by the intersection of the system curve with the pump curve. Unless the system curve is variable, the flow increase may not be that significant.

For example, assume that there is a set of fixed spray nozzles, where the system resistance is purely frictional, and varies only as a result of flow change. When a second pump is introduced, resistance in the system increases as the flow increases.

The flow will increase only to where the system curve intersects the two-pump curve, as shown in Figure 2. 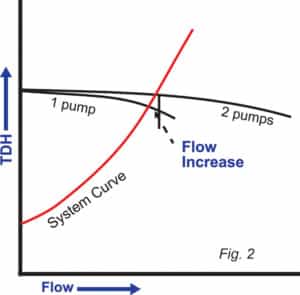 The amount of flow increase is dictated not only by the system curve, but also by the steepness of the pump curves. Pumps with flat curves will have less TDH separation than pumps with steep curves and therefore will have less flow rate change.
A fire pump installation would be an example of a system that has a variable system curve. Figure 3 illustrates this. Each time an additional fire nozzle is activated, the system resistance is decreased. This causes the system curve to move to a higher flow on the pump curve, increasing the kW load on the pump and decreasing the amount of TDH available. Eventually, another fire pump may need to be activated to maintain the system pressure as more nozzles come online.

Pump specifications often dictate that pumps have a continuously rising head curve to shut-off. It is a characteristic of certain pumps to have a head curve that droops as the flow approaches shut-off.

This characteristic is quite prevalent in pumps with specific speeds under 30 (Ns~1550 US units). Curves with a drooping shut-off characteristic may experience load sharing problems when operating in parallel with other pumps.

In Figure 4, the system and TDH curves intersect at a TDH that is greater than the shut-off TDH value and at a lower TDH than the max TDH of the curve. When the second pump starts, the flow rate will increase only to the first point where the TDH matches the pressure in the system. 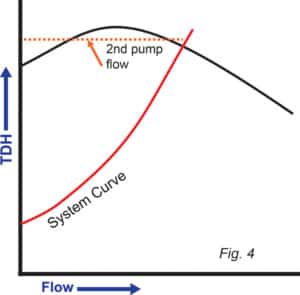 Due to the first pump’s operating TDH point being mirrored by another at a lower flow, the second pump’s flow rate will not increase beyond the low flow point. At best, the pumps will share the load unevenly, with the second pump operating at a lower efficiency.

Worse, the second pump might operate at less than its minimum allowable design flow, resulting in damage to the equipment and possible injury to personnel.

A similar condition may exist when one pump is worn. This is referred to in Figure 5. As a pump wears, the amount of TDH produced at any given flow rate diminishes. If the new pump’s intersection with the system curve is above the shut-off TDH of the worn pump in parallel, it will force the worn pump into a shut-off condition. 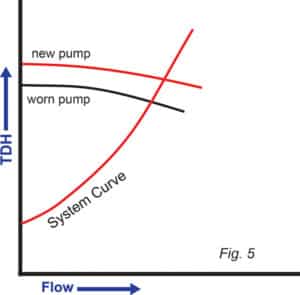 Parallel operation of unmatched pumps When pumps operate in parallel, the flow rate at any given TDH point is additive. In the case of pumps that have identical operating characteristics, the flow would double.

Again, the system curve does not change, so the actual change in flow that occurs with bringing a second pump online, in parallel, is determined by the characteristic curve intersection with the system curve. This is shown in Figure 2.

When a pump is operated in parallel with another pump that has a different operating characteristic, the same rule applies as for identical pumps; for any TDH, common to both pumps, the flow characteristic will be additive.

If one pump exhibits a lower shut-off TDH characteristic, it will operate at shut-off until the dominant pump moves far enough out on its curve so that its TDH falls below the shut-off TDH of the pump with lower head (Figure 5).

The danger here is in the system-pump interaction. If the system curve intersection with the characteristic curve is at a higher TDH than the shut-off flow of the weak pump, the weak pump will be forced to run at shut-off and a serious failure could occur.

In Figure 6, a zero-flow condition for the weak pump will exist when the system curve intersection is to the
left of the vertical dashed line. As a general rule it is a good idea to have flow measurement installed for any pumps designed to operate in parallel. Without flow measurement, it is very difficult to determine what the load sharing is between the two pumps.

Motor power is often a questionable indicator of flow, as many power curves are quite flat and show small changes in load over relatively large changes in flow.

Also, when wear does occur, the power draw may remain relatively constant even though performance is falling off. This is due to a decrease in pump efficiency which is not visible to the pump operator.