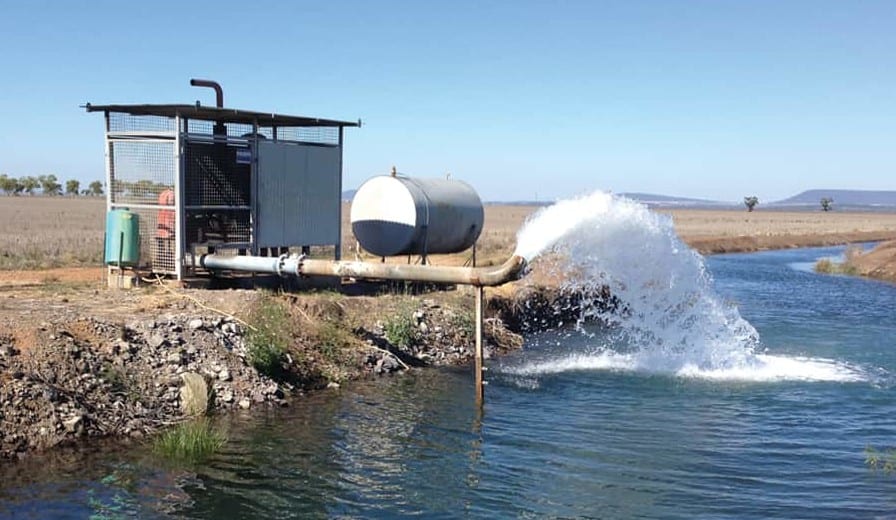 The work was carried out by engineers from the University of Southern Queensland’s National Centre for Engineering in Agriculture (NCEA) in Toowoomba in a project funded by the Commonwealth Department of Industry and Science, and the Cotton Research and Development Corporation (CRDC).

NCEA water and irrigation specialist, Joseph Foley, said the aim was to test the large mixed flow pumps that dominated the irrigation industry to get a clear picture of how they were performing.

“Given our past work has shown that irrigation pumping is the largest energy consumption component on farm, we thought it wise to focus on the large 26 inch mixed flow pumps and to fathom how well this 50-year-old technology can operate,” he said.

“We initially thought they would not perform well below their curve, but our test results clearly indicate they can perform quite well, similar to the large axial flow pumps but at a fraction of the capital cost.” Dr Foley said that in most of the situations they looked at, while the pumps had the potential to perform well, they were typically being operated to the right of their curve at the low efficiency points in their range of capabilities.

He said significant savings were possible when the pumps were tested, their current performance analysed, and adjustments made to the pump speed, operating head and pump flow rate.

“The larger the TDH becomes, the higher the pumping costs per ML will be in any pump station.

“The static lift component of the TDH can’t be reduced at any one point in time, but the friction and minor loss components can be significantly reduced if the flow rate can be reduced, or if larger valves and fittings can be installed at the pump station.

“The minor head loss component of the TDH is something that can be reduced through an engineering re-design of the pump station pipework, so that it is no longer a major proportion of the pump’s TDH.”

Diesel energy savings of over $1500 per season are expected with a new impeller in the pump, providing payback in three to four years, and reducing emissions by four tonnes of CO2e each season.

In one of the tests on an electric 26 inch mixed flow pump, Dr Foley said it was found that the four metres of head loss could be reduced substantially by replacing the existing angled cut suction pipe entry and grate with a smooth bell-mouthed entry.

Another recommendation to reduce pumping costs at that site was to bring into service an adjacent, unused tractor-PTO-driven 26 inch mixed flow pump, allowing two pumps to operate and pump speeds to be reduced substantially but maintain the delivery rate of 150ML/day.

Dr Foley said by resetting each pump to deliver 80 ML/day, pump efficiency would improve from 75 per cent to 88 per cent, plus the slower water velocities would reduce head loss from four metres to 1.3m.

In a separate test of a 20 inch diesel mixed flow pump, it was found the pump was operating more than 12 per cent below the manufacturer’s benchmark, and reducing the flow rate accordingly.

One of the key recommendations was to reconfigure the pump’s drive to lower the speed, resulting in a 30 per cent reduction in pumping costs.

With expected capital costs for a second pump installed being around $40,000, payback on pumping costs at the required flow rate are around four years, and would reduce emissions by nearly 27 tonnes of CO2e per year.

Funding from the Commonwealth Department of Industry and Science was made available under the Energy Efficiency Information Grants scheme to the Cotton Research and Development Corporation for engineers at the National Centre for Engineering in Agriculture to complete measurement and analysis on a number of large mixed pump stations
on irrigated cotton farms.

This case study was originally published by the cotton industry’s extension program, CottonInfo.