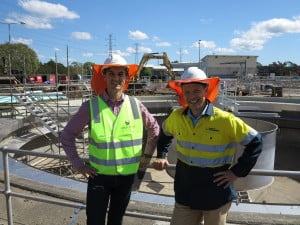 Queensland Urban Utilities have begun works on their second largest sewage treatment plant in Oxley Creek to protect it against floods.

The $30 million Oxley Creek Sewage Treatment Plant flood recovery project is a response to damage sustained from the 2011 Brisbane floods.

Queensland Urban Utilities spokesperson, Michelle Cull, said “We’re rolling out a range of flood mitigation measures across the site, including raising all the critical electrical equipment above the 2011 flood peak,”

“All of the control switches are also being built on hoists so they can be wound up, out of harm’s way before a flood hits.

“Most of the mechanical and electrical equipment, including 30 pumps, had to be replaced after two metres of water swept through the facility.”

This year will mark the fifth anniversary of Brisbane’s 2011 floods which saw the Oxley Creek Sewage Treatment Plant submerged in water.

The plant, which is located in Donaldson Road, Rocklea, is Brisbane’s second largest sewage treatment plant, servicing around 300,000 people.

“Another benefit of the project is that the capacity of the plant will be increased from 53ML of sewage per day to 65ML,” Ms Cull said.

“This will help cater for the growing population in the western suburbs.”

The Oxley Creek Sewage Treatment Plant flood recovery project is due to be completed by mid-2016.