A typical wastewater system may comprise of a network of sewers and sewage pumping stations (SPS) that collect and transport sewage from where it is generated to a wastewater treatment plant for treatment. In part one of our two part series, we look at some of the key design elements.

Wherever possible, the wastewater system should be designed to maximise the use of gravity to convey the sewage. Gravity wastewater systems do not use energy nor require maintenance at anywhere near the same rate as pumping stations. Also, they are immune to many pumping problems, such as power and controls failures causing overflows, excessive detention times in wet wells and pressure mains with associated odour and corrosion issues, sudden variations in flow loads on downstream facilities causing surcharges or poor treatment performances etc.

However, large catchments, steep or relatively flat terrain and other variations in the local landscape may preclude or limit the viability of a gravity system. When this happens, one option is to pump sewage by SPS(s) through pressure main(s) into the most suitable nearby sewer, where it can drain by gravity to another pumping station or a wastewater treatment plant. A gravity wastewater system draining to one or more SPSs is generally the most common option. However, alternative systems such as vacuum or pressure sewerage systems, which also rely upon pumps, may be considered. A multiple criteria analysis is often used in determining the most suitable system.

The number of SPSs in Australia continues to grow with over 4600 reported in WSAA facts 2003-4, including over 680 within Sydney Metropolitan Area alone. Pumping stations should be designed and constructed to minimise the risk of adverse environmental impacts and support a totally integrated wastewater system that can be operated and maintained at the lowest life-cycle cost. SPSs and pressure mains are made up of a multitude of civil, electrical and mechanical items including pumps, structures, power and control equipment, telemetry systems, pipes, fittings and valves.

Both, positive displacement and centrifugal pumps are nowadays used in SPSs to pump sewage.

Centrifugal pumps are the most common type of pumps used in SPSs. These can be employed in dry (dry well) or submersible (wet well) installations. Centrifugal pumps are not self-priming and are usually installed below minimum water level or otherwise need to be fitted with priming devices. 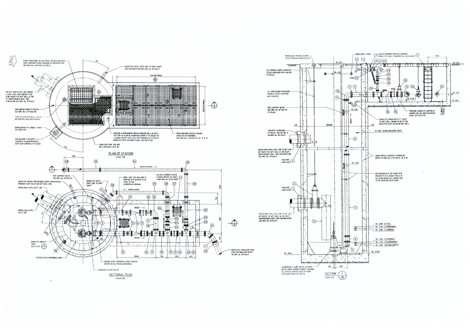 Conventional (dry well) pumping stations with vertical sewage pumps driven by air cooled electric motors were normal design practice until the development of the submersible motor driven pumping units. A typical conventional SPS consists of side-by–side inground wet and dry wells (often an integral concrete substructure divided by a wall) and a superstructure providing personnel access into the dry well and housing electrical and control equipment. The pumps and pipework are installed in the dry well, which also accommodates ancillary equipment such as access steelwork, ventilation and lighting required for safe entry and operation / maintenance. Sometimes the electrical equipment is also installed on a mezzanine level in the dry well.

There are many conventional dry well type pumping stations still in operation. Some authorities, however, prefer to convert dry wells into wet wells when refurbishing existing conventional SPSs or, as a minimum, replace the dry well pumps with submersible pumping units and relocate the electrical equipment to above ground level so that they are not damaged if the dry well floods. Dry well installed submersible pumps are also used in vacuum pumping stations to transfer sewage collected in vacuum pots. Some authorities prefer dry well installations over wet wells for large, very deep and/or critical pumping stations due to easier access to the pumps for condition monitoring, inspection and in-situ maintenance.

Since the development of submersible electric motors, most water authorities across Australia have adopted submersible, wet well sewage pumping stations as a norm. They were found to be more cost effective (only one well is required), safer to operate (mainly from ground level with no need to enter confined spaces), have a lesser profile / visual impact, require a smaller footprint, have lower noise levels, are less expensive to run and maintain, have similar layouts and features which can lead to easier standardisation etc.

Due to their similarity and popularity, Australian water authorities, lead by Water Service Association of Australia (WSAA), produced a Sewage Pumping Station Code of Australia WSA 04 which sets out the requirements for minimum acceptable technical criteria for design and construction of submersible sewage pumping stations, associated structures and pressure mains. The first version of the Code was published in 1999 and its current version 2.1 was issued in 2005. Some water agencies, such as Sydney Water have subsequently issued their own editions of the Code to include their specific requirements.

The Code covers small to medium size pumping stations and pressure mains up to 200 L/s and DN 375 with two pumps (1 duty + 1 standby). However, its main principles are usually adopted for design of larger pumping stations as well.

With exception of a few positive displacement, vacuum pumping stations and pressure sewerage systems due to site specific reasons, all new sewage pumping stations constructed within Sydney Water’s area of operation (Sydney metropolitan, Blue Mountains and Illawarra) over the last 25 years were of  submersible wet well type. They range in flow rate from less than 5L/s to more than 2000L/s. The largest one (SP1174), comprising of six (4 duty + 2 standby) 310kW variable speed submersible pumping units has been constructed within SWC’s Quakers Hill Wastewater Treatment Plant and is currently being commissioned. The station has a capacity of 2200L/s with a provision for future upgrade up to 3300L/s.

This article will be continued in our next edition where we take a closer look at submersible pump stations and drives.