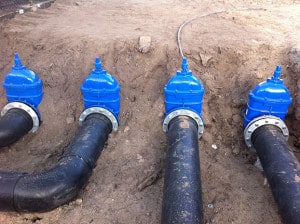 Pump Affinity provide quality flow management and ground water solutions, including horizontal, wellpoint and well dewatering, pH dosing, pump project management, flow gauging, and pump hire.
Eire Contractors engaged Pump Affinity’s services in the tendering process as well as during the bypass and rising main works. Successful liaison on past projects has meant that Pump Affinity is Eire Contractors preferred company to provide dewatering, bypass management, including flow management plans, onsite monitoring and pump hire. Operating as an exclusive hire agent for Vortex Hire, Pump Affinity supplied, serviced and maintained four QSCP150i for the works.
The night of the rising main commenced at 9pm on 14 August 2012 and continued until 9.30pm on 15 August, involving the transport of almost 3 mega litres of sewage, via 322 truckloads to Toukley Treatment Works. Pump Affinity staff provided onsite monitoring of the pump station wet well throughout this tankering process, to ensure operating levels were maintained.
The works are part of a $3.5 million sewer rehabilitation program and pump station upgrade being undertaken by Wyong Shire Council as part of its commitment to providing a safe and efficient sewer network. The two main components of the program are the sewer rehabilitation program which includes the inspection, cleaning and relining of approximately 10 kilometres of sewer mains and will improve the performance and reliability of the sewer system in the area and the Budgewoi sewer pumping station upgrade to provide reliable and efficient sewerage infrastructure to the local community. Both projects are expected to be completed by December 2012.
Wyong’s sewer network is around 50 years old, and Council’s commitment is to review and maintain the system every year to ensure minimal impact of overflows and odours to the community and environment. Council’s Director of Infrastructure Management Greg McDonald said the works are a significant investment to boost the operation of the region’s 1,252 kilometres of sewer pipelines.
“This program will make sure we can continue to protect local residents and businesses against mains breaks and sewerage leaks, and have efficient and safe pump stations,” Mr McDonald said. “This investment in the sewer system will ensure a safer environment for the short-term and that the sewer system remains functioning into the future.”
Wyong Shire Council’s Project Manager for the SPS T22 upgrade works, Martin Drake noted that the commitment of the bypass team, including Eire Contractors staff and their subcontractor, Pump Affinity, ensured an efficient and effective result was achieved maintaining the integrity of their asset for many years in the future. The rising main valve replacement and its flow management provided council with confidence for the second stage of augmentation works in September requiring full isolation of pump station and eight weeks of bypass all designed and supplied by Pump Affinity.

Like the local water supply infrastructure, the Wyong Shire sewerage system is modern and was mainly built since 1970.
All new urban development must be connected to the system which consists of sewage gravity collection pipes, pumping stations and pressure mains to convey the mainly liquid waste (sewage is more than 99.9{87a03eb4327cd2ba79570dbcca4066c6d479b8f7279bafdb318e7183d82771cf} water) to sewage treatment facilities.
At the treatment facilities, mechanical and biological processes are used to separate the solids (sludge) from the water (effluent). The sludge is removed and subsequently used for beneficial uses by external companies. Effluent, which has been treated to a high standard typically contains less than 0.002{87a03eb4327cd2ba79570dbcca4066c6d479b8f7279bafdb318e7183d82771cf} solids and is discharged to the ocean via outfalls at Bateau Bay (Wonga Point) and Norah Head.
The Wyong Shire sewerage system services more than 60,000 properties through a network of 1240 km gravity and pressure mains and 142 pumping stations. There are six treatment plants located at Toukley, Bateau Bay, Charmhaven, Wyong South, Mannering Park and Gwandalan.
Effluent from Toukley, Charmhaven, Wyong South, Mannering Park and Gwandalan sewage treatment plants is discharged to the ocean at the Norah Head outfall.