I was teaching a Piping System Fundamentals course at an open pit copper mine and mill in the south­western United States.

During my introduction I stressed the importance of understanding how the individual items of a piping system work together. I then went around the room asking each attendee what they did at the facility and what they hoped to get out of the course.

Each attendee had a specific topic of interest and I remember the dewatering engineer saying his goal was to improve the operation of the dewatering pumps.

Being that the mine was in the desert, I asked him how big the pumps were. He mentioned they were mounted on a semi­trailer so they could be moved around the mine, along with a second semi for the diesel electric power supply.

Even though they were in the desert, all the rainfall would run off the ground resulting in flash floods that could quickly collect in the mine causing a disruption in production.

During the course of the training, when I discussed system static head, I made a point that the static head of the dewatering system amounted to the difference in elevation between the water level at the bottom of the mine, to the elevation of the end of the discharge piping.

When we covered the material on pipeline sizing, the dewatering engineer asked why we needed to perform this calculation.

He said his rule of thumb was to size the discharge pipe to that of the pump’s discharge flange.

For example, if the pump’s discharge nozzle was 150mm, he would use a 150mm nominal size pipe for his discharge header. In this article we’ll discuss why his rule of thumb may be costly.

A piping system is made of three elements: the pump elements, adding all the fluid energy; the process elements, making the product or providing the service; and the control elements, improving the product quality. Figure 1 shows the system details.

Figure 1. Layout of the example piping system showing the pump and process elements. Control of the system is achieved by turning the pump off when not required.

In this example system the pump is an end suction design with a manufacturer’s identifier of 8×6­11, operating at 3,000rpm.

The process elements consist of the supply tank, with a liquid level of zero metres above the common datum.

The destination tank has a liquid level of 62m above the common datum. A short 350mm diameter pipeline serves as the pump’s suction line with insignificant head loss.

As a result, all the energy supplied by the pump is used to move the fluid through the process elements. Now that we have the three elements defined, let’s see how a change in the pipe diameter effects the flow rate through the system.

Looking at the system

Table 1. How the system operates with various pipe diameters, along with the resulting cost in Australian dollars per 1,000m3 pumped.

From the table, you can see interaction between the various elements found in a fluid piping system. As you can see, as the pipe diameter increases, the head loss in the pipeline decreases along with the fluid velocity.

With lower pipeline head loss in the larger pipe diameter, more of the pump’s energy can be used to move the fluid.

As the flow rate increases in the pump, the head produced by the pump decreases as demonstrated on the pump curve (Figure 2). We also notice changing the flow rate through the pump varies the pump efficiency. Graph 1 shows how changing the nominal pipe diameter affects the pumping costs. As you can see from this graph, sizing the discharge pipeline to match the pumps discharge flange is not the most economical choice.

The other item to point out is that the pumping cost per 1,000gpm decreases rapidly but the savings decrease with increasing pipe diameters.

This can become a tedious calculation and is best performed by specialised computer software.

Rather than performing a detailed cost optimisation for sizing pipelines, companies have developed piping specifications based on the process fluid being handled.

These specifications have been developed over time, based upon the company’s needs and experiences.

A chemical process plant will typically have many pipe specifications to handle the various process fluid they have, where an industrial plant may have a few specifications for the cooling fluids and transporting fluids needed for the process. 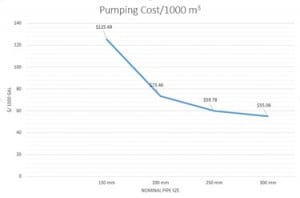 The pipe fluid velocity range for general service applications is between 1.2 to 3m/s.

How do pump manufacturers arrive at a flange diameter?

After all this, you may ask why the pump manufacture doesn’t size the pump discharge flange for the recommended pipe diameter. There are a variety of reasons for this:

As we saw in this application, sizing the pipe diameter to match pump discharge diameter resulted in a greater unit cost for pumping the process fluid.

In addition, for this system, the smaller pipe diameter resulted in lower flow rates through the system.

As a result, by sizing the pipeline correctly, you can reduce not only your operating costs but also the time the pump needs to operate. In our mine dewatering example this would pump the mine out faster allowing the mine operation to return to normal quicker.