In this Queensland Farmers Federation case study, an Energy Savers audit for a pawpaw farm near Mareeba has proposed the site’s diesel irrigation pump be converted to solar, with an expected 100 per cent energy saving and an approximate five year payback period.

The farm, near Mareeba, grows pawpaw which is packed for the national market. Cattle are a secondary focus. Irrigation is mostly by drippers to the pawpaw trees, but there are plans to move to sprinklers in the future.

Irrigation continues throughout the dry season for up to eight months per year depending on rainfall.

The farm operates a single diesel pump for irrigation, but future expansion is anticipated with a second pump site under development.

These pump systems have been the focus of an energy efficiency audit.

The site energy consumption consists of:

An audit of site energy consumption evaluated a number of options, including:

The baseline case for both pump locations for evaluation purposes was an electric pump installation with grid connection.

At the existing pump site, a new diesel powered pump was also assessed for lifecycle comparison purposes due to the existing units remaining serviceable life.

At the existing pump location the recommendation is to install a solar powered 19kW electric pump with a 20kW solar array over an area of 150m².

The estimated payback occurs around year five, with an electric grid-connected pump only marginally better than the replacement diesel pump over the 15 year lifecycle due to estimated network connection cost.

Also, upgrading to a solar powered pump eliminates diesel consumption of 8,900 litres and the labour costs associated with ongoing refuelling and maintenance.

Similarly the new pump site recommendation is a solar powered 9.5kW electric pump with a 10kW solar array over an area of 75m² with the return on investment being immediate due to the estimated network connection cost of the electric pump similar to the solar PV arrangement.

For this farm the MJ/ML/m head reduced from 36 to 12 when adopting an electric pump over the diesel installation. 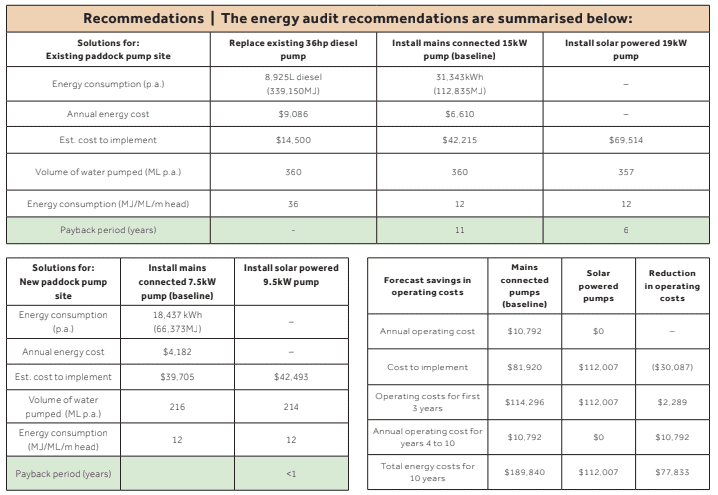