View Part 1 of this article.

Currently accepted limitations on suction specific speed are based on studies undertaken in 1982 and 1985. However, pump design and construction standards have come a long way over the last few decades. Therefore, a recent study sought to revisit and re-examine the original tests. In Part 1 of this article we looked at the changes in pump design and construction standards that bring the old limitations into question and the details of the study’s method. In this edition we examine the results to determine whether the old guidelines are still relevant.

Each impeller was subject to a full performance and NPSH test based on the criteria set out in API 610. The results of each impeller performance compared to the design target are shown in Figures 16 and 17. These results confirmed the prediction of the CFD. Head and efficiency agreed within 5 per cent between CFD and test when the calculated casing losses were combined with the CFD values.

Tested NPSHr was 21 to 33 per cent lower than the original nominal target values. These values and the corresponding suction specific speed are shown in Table 7.

There are two main reasons for this difference:

1. The acceptance tolerance for NPSHr allows no positive tolerance. Thus impellers are designed to achieve lower than the target NPSHr by approximately 14 per cent to allow for manufacturing variances and uncertainty of design.

2. The design methods used did not take into account the improvement achieved through use of the parabolic leading edge profile. From previous testing this NPSHr improvement was believed to be approximately 18 per cent.

For flow values higher than the onset of suction recirculation, the values of NPSHr from CFD showed substantive agreement with the tested NPSHr values. NPSHr predictions obtained via CFD are typically 5 to 15 per cent lower than those attained on test. This can be accounted for with casting and surface imperfections, unsteady flow features including vane pass contributions and system response characteristics, and non-uniform inlet flow fields.

At lower flow rates the tested NPSHr values diverged from the CFD predicted NPSHr values due to impeller-casing interaction in recirculation which the impeller only CFD is unable to simulate. Results of predicted 3 per cent head drop versus flow are shown in Figures 17a and 17b.

Vibration values for the both overall vibrations and vane pass are plotted on Figures 18 and 19. (Vibration levels due to mechanical sources, specifically 1x and 2x running speed were less than the 0.08 in/s (2.0 mm/s) allowable level for discrete frequencies and were therefore not used as an acceptance criteria). 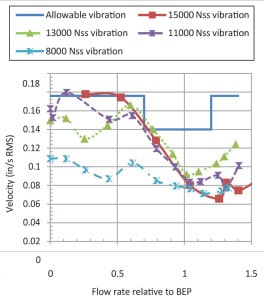 The results show that all impellers exhibit a rising vibration level away from the impeller shock-less flow point. The Nss 15,000 nominal (17,841 actual) impeller design exceeded the acceptable vibration level at 86 per cent of BEP due to vane pass.

The 13,000 nominal (17,066 actual) impeller design exceeded the acceptable vibration level at 76 per cent of BEP due to vane pass.

The 11,000 nominal (14,766 actual) and 8,000 nominal (9,568 actual) impeller designs did not exceed any vibration criteria throughout the entire operating range tested from
25 per cent to approximately 140 per cent of BEP.

It should be noted that the test set-up was of average quality. The test pedestals were clamped to the test base and were not specifically designed for the pump being tested. Consequently, the vibration levels achieved could be meaningfully improved by refinement of the test setup. Similarly for a pump permanently installed in the field on a grouted baseplate, we would also expect a reduction in vibration levels achieved on test.

The pump was also equipped with a suction tapping adjacent to the eye of the impeller (see Figure 20). The pressure at this tapping was logged and compared to the pressure at the suction tapping at a location 2D in front of the suction flange. The purpose of this measurement was to ascertain when suction recirculation occurred and compare this result with the values predicted by Fraser and CFD. Figure 21. Ratio of suction performance at casing to upstream in the suction pipe.

Figure 21 shows a plot of suction pressure recorded at both tappings, normalised for the area differences and corrected for friction losses between the two locations. This shows an apparent recirculation inflection point for all the designs between 60 per cent and 70 per cent of BEP as shown in Table 8.

While the tapping clearly records the presence of suction recirculation, the number of readings taken and their scatter precluded this method from providing an accurate indication of the onset of recirculation. As can be seen from Table 8, there was significant disagreement between the Fraser and CFD figures, as compared to the values obtained during this test.

With more time and refinement of the technique (in particular a much higher density of measurement points), we believe it could yield a more accurate indication, however for the purposes of this paper the technique will not be discussed further.

The test results can be converted into an operational range chart similar in style to that used by Lobanoff & Ross. Figure 22 shows this in detail. Compared to Figure 3 (refer to Part 1 of this article), the stable operating window is substantively larger and only closes at suction specific speeds far above those typically specified by most users. 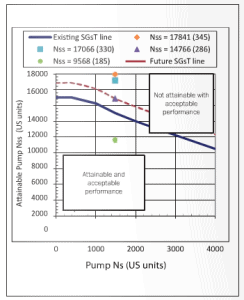 Figure 23. Trade off line (SGsT line) for Ns versus Nss.

This result was compared to an existing internal guideline (known as the SGsT line), used by the author’s company governing achievable end suction impeller designs with acceptable vibration and stability characteristics. This guideline is reproduced in Figure 23 with the impellers designed for this paper plotted on it. The main solid blue line indicates the dividing line between acceptable and non- acceptable performance.

For the specific speed of the test pump, the existing SGsT line value of approximately 13,000 nominal suction specific speed would appear to be easily attainable with the currently available design tools. As the state of the art continues to improve it may be possible to revise the SGsT line upwards in the future as shown on Figure 23.

Thus in order to achieve an acceptable operating range with these impellers, the Nss target needs to be reduced.

The testing results confirm that substantive improvements in stable operating range versus suction specific speed are achievable utilising modern impeller design and pump construction standards. The realisable performance (Nss = 14,776 (S = 286) with acceptable vibration characteristics) is so far removed from what most users consider attainable that it should give pause for consideration as to whether Nss =11,000 is always the appropriate choice for medium to low specific speed impellers.

The authors would recommend that users consider adopting their own version of the SGsT line. The specific speed of the pump is an important determinant of the attainable Nss (with reliability) and needs to be recognised.

If correctly applied, the use of such enhanced designs allow the designers of processes utilising pumps increased flexibility and the potential to realise a lower first cost with equal or even improved reliability (if high specific speed pumps are specified with conservative SGsT limits), than is possible with current one size fits all suction specific speed limit.

Of equal importance is action from the users of pumping equipment to build on Hallam’s work and provide an updated large scale study of pump reliability for the 21st century.

Stoffel, B., Jaeger, R., 1996, Experimental Investigations in Respect to the Relevance of Suction Specific Speed for the Performance and Reliability of Centrifugal Pumps, Proceedings of the 13th International Pump Users Symposium, 1996.