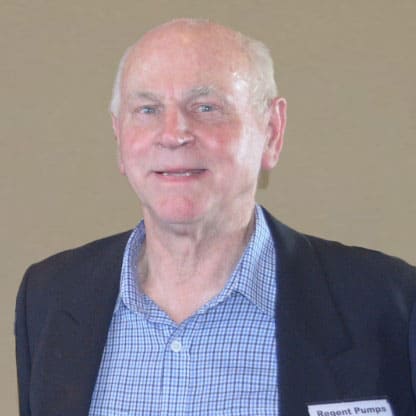 A well-known figure in the Australian industry, Roger was passionate about pumps and the pump industry. He was the Owner of Regent Pumps and took great pride in the company as an Australian-owned and operated pump manufacturer since it opened in 1948.

In a social media tribute, Roger’s daughter, Rachel Withers, called him a strategic mastermind, recounting how he engineered his final goodbye by breaking out of hospital two weeks ago and going to a nicer hospital, allowing the family to say goodbye during a time when restrictions to hospital visitors was high.

“He was playful, daring, iron-willed, generous (to a fault), tireless and definitely some kind of genius. ‘Balls like an elephant!’ someone yelled at the Christmas party when he declared he would fight and beat his cancer. Had it been the beatable kind, we all know he would have. As it was, he struggled on well past the two months they gave him, making work calls right up until his brain stopped working. I don’t think we’ll ever figure out how he managed to MacGyver his way out of hospital, but he did, and I’m so glad he came home to us,” Rachel wrote.

“The calls I had to make today were hard, but they made it clearer to me than ever that my dad was one of a kind. Anyone who ever worked with him or raced with him was floored that he could actually be gone, and the word icon came up again and again. The pump industry is mourning a titan.

“Over the past few months, many people have told me that they consider him a father figure. I could not be prouder to have been able to share him with so many.”

Along with being a well-loved member of the pump community, he was a supporter of the Australian industry, with the Regent Pumps being a long-term member of the APMA/PIA.

Roger’s funeral will be held on 21 April 2020 in Springvale, with only family in attendance.