Sulzer HSTTM turbocompressors are successful in wastewater treatment. Today, thousands of units are installed around the world in municipal plants. In the city of Sögel, Germany, the turbocompressors not only reduced the operating costs of the treatment plant but also helped it to cope with load fluctuations.

The secret behind this success is an advanced design with proven magnetic bearing technology and a high-speed motor.

The wastewater treatment plant of Sögel, a joint municipality with approximately 16,000 inhabitants located in the Emsland region of Lower Saxony, received a series of upgrades to achieve a capacity of 66,500 population equivalent in recent years.

The plant treats not only domestic wastewater, but also industrial wastewater from nearby food industry factories. The plant used an aeration system with up to seven rotary lobe blowers that provided oxygen to the biological sewage treatment. The HST turbocompressors are used in biological sewage treatment. They provide airflow to a water treatment basin where diffusers split the air into tiny bubbles.

However, process-related increases in pressure were causing single-unit failures with rising frequency. In addition, the relatively high share of industrial wastewater (up to 75 per cent) led to large load fluctuations within a few hours. These fluctuations required a rapid response in air supply.

Following its assessment of a range of technological solutions, the treatment plant of Sögel decided to purchase Sulzer HST turbocompressors. The decision was made partially because of recommendations from a neighbouring municipality, which has already been operating Sulzer’s turbocompressors for several years.

The supply of oxygen to four aeration tanks is now handled by five centrally controlled turbocompressors. While between one and three units run during normal operation, additional turbocompressors can be switched on during peak load times to meet considerable increases in the polluting load. 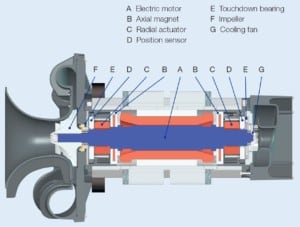 High-speed technology (HST) is an electric motor-driven, low-pressure centrifugal air compressor. The impeller of the radial compressor, the electric motor and the cooling fan are integrated to one common shaft, which runs at a high speed.

Sulzer designed the HST compressor almost entirely in-house. The AMB, the motor, the control system, the cooling, the turbo unit and the packaging are all Sulzer’s own design. Only the frequency converter was sourced externally.

The high-speed unit of the HST compressor is a highly integrated and challenging device. The challenges include high mechanical stresses, rotor dynamics, cooling and efficiency optimisation. The goal was to achieve a well-designed, high-speed unit with high efficiency in a wide operating range and with sufficient margins to all technical limits, such as stresses, critical speed, maximum temperatures and so on.

A lot of experience and powerful modelling tools, especially finite element modelling, were required to meet the design goals. Such system integration is one of the key strengths of the Sulzer research and development team.

Sulzer has used AMBs in HST compressors ever since it began producing them. In an AMB, the rotating part is levitated using actively controlled electromagnets. Even though the basic operating principle is straightforward and the AMB system is simple from the end user viewpoint, the system is technically complex.

In a typical application, like an HST compressor, there are radial actuators consisting of four horseshoe electromagnets at both ends of the machine. In addition, there are typically two axial magnets to keep the rotor in place axially.

Consequently, during normal operation, the observed vibrations in the stator side are very low. Another important consequence is that a very high level of rotor unbalance is tolerated, which improves the reliability of the system.

In order to levitate the rotor, the magnetic bearing controller (MBC) measures the rotor positions and makes control decisions 10,000 times per second. In addition to the instant position signals, the MBC monitors approximately 100 different variables, including whirling orbits, thermal expansion, static loads, coil currents, coil condition, temperatures, internal voltages and so on. Therefore, the AMB is not only a bearing, but also an extensive condition monitoring system. It reports deviations from the normal conditions to the compressor control unit, which shows the alarm messages to the end user in the graphical screen.

Development of motor and control system The Sulzer ICE user interface depicts the operating range of the compressor, the limits and the current operating point.

Because of the advantages of PM motors, Sulzer has put a lot of effort into developing a suitable PM motor construction for HST compressors. The motor it has developed uses neodymium-iron-boron magnets and carbon fibre sleeve to provide the mechanical strength. 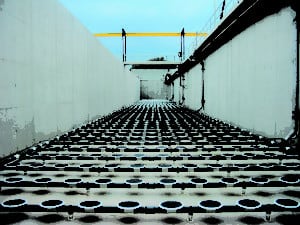 By converting to HST turbocompressors, installing new aeration units and optimising the controls, the specific energy consumption of the Sögel wastewater treatment plant has dropped by more than 50 per cent in the past six years. More than 80 per cent of this reduction is due to the installed turbocompressors.

In addition, the maintenance costs were reduced. The earlier rotary piston blowers required checking of oil levels and belt tension on a daily basis, as well as replacing of filters, oil and bearings by internal and external specialists, and demounting and dismantling of units to enable maintenance. The HST compressors are nearly maintenance-free. Only the filters need to be replaced.

According to a conservative estimate by the operator, the conversion to Sulzer equipment translates into yearly savings of EUR€10,000 in maintenance costs. This example demonstrates how Sulzer equipment enhances the performance of wastewater treatment and drives down operating costs.

This partner content is brought to you by Sulzer. For more information, visit: