Why don’t good seals wear out? 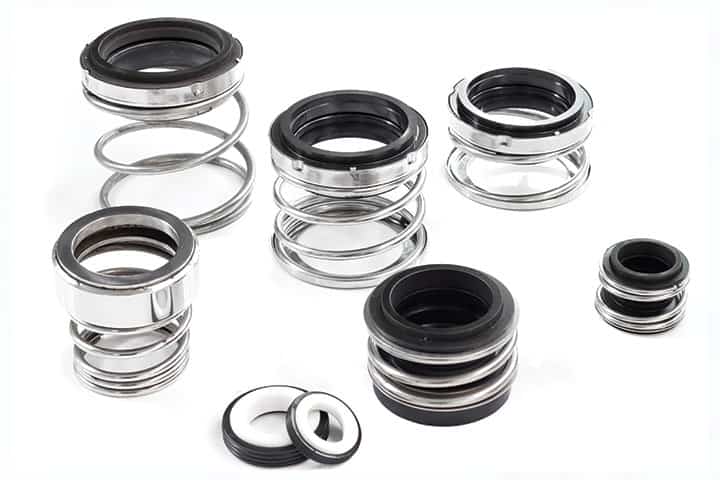 We know that a mechanical seal is supposed to run until the carbon wears down, but our experience shows us this never happens with the original equipment seal that came installed in the pump. We buy an expensive new mechanical seal and that one doesn’t wear out either. So was the new seal a waste of money?

Not really. Here you are doing something that appears logical, you are trying to solve the seal problem by purchasing a different seal, but that’s like trying to get a good paint job on an automobile by buying a good brand of paint.

If you wanted to get a good paint job on an automobile you would have to do four things: Prepare the body (metal repair, rust removal, sanding, masking etc); buy a good brand of paint (all paint is not the same); apply the paint correctly (with exactly the right amount of air pressure, no drips or runs and frequent sanding between primer and finish coats); and take care of the paint after it has been applied (keep it washed, waxed and garaged). If you did those four things correctly, how long can a paint job last on an automobile? Obviously for years. Step outside and watch the cars go by and you will see evidence of people that are not doing those four things. In fact, it is so rare that when we see an older car that looks good, we stare at it.

Achieving a good seal life also involves four steps. They should be obvious, but let’s look at them anyway.

We will look at each of these subjects in detail and hopefully begin to increase the life of our mechanical seals to the point where most of them wear out. This information relates to centrifugal pumps but can also apply to just about any kind of rotating equipment, including mixers and agitators.

Prepare the pump for the seal

To prepare you should do an alignment between the pump and driver, using a laser aligner. A “C” or “D” frame adapter is an even better choice.

Next, you dynamically balance the rotating assembly, which can be done using most vibration analysis equipment, but check with your supplier if you do not have the program. You must make sure the shaft is not bent and that you rotate it between centres.

It’s a good idea to avoid shaft sleeves, as a solid shaft is less likely to deflect and is much better for a mechanical seal, and try to reduce pipe strain wherever possible.

Use a “centre line” design pump if the product temperature is greater than 100°C, as this will reduce some pipe strain problems at the pump. Also, use pumps with a low shaft length to diameter ratio. This is extremely important with intermittent service pumps.

Use an oversize stuffing box, avoid tapered designs, and give the seal lots of room. Try to get the stuffing box face as square to the shaft as possible, which can be done using facing tools, and reduce the vibration by using any techniques you know.

It’s essential that you do not let the pump cavitate, as the seal faces will bounce open and possibly become damaged. Water hammer can also occur if power is lost to the pump while it is running, so take preventative action to avoid these problems.

There are a few things that need to be checked when preparing the pump for the seal, including; that the mass of the pump/motor pedestal is at least five times the mass of the hardware sitting on it; that there are ten diameters of pipe between the pump suction and the first elbow; and that the base plate is level and grouted in place.

Keep the open impeller adjusted to lessen vibration and internal recirculation problems, make sure the bearings have the proper amount of lubrication, and that water and solids are not penetrating into the bearing cavity. You should also replace the grease or lip seals with labyrinth or face seals.

Make sure to avoid discharge recirculation lines connected to the stuffing box, in most instances suction recirculation will be better. If the pump has wear rings, ensure you also check their clearance.

The final things to do when preparing the pump are to make sure the wetted parts of the pump are manufactured from corrosion-resistant materials, as cleaners and solvents in the lines sometimes cause problems that the designer never anticipated.

Then seal off any air that might be leaking into the suction side of the pump and remove any that might be trapped in the volute.

Use hydraulically balanced designs that seal both pressure and vacuum and if you are going to use an elastomer in the seal, try to use an o-ring. These are the best shape for lots of reasons, but don’t let anyone spring load the o-ring or it will not flex or roll as it should.

You should also use non-fretting seal designs as shaft fretting is a major cause of premature seal failure.

Stationary seals (where the springs don’t rotate with the shaft) are better than rotating seals (the springs rotate) for sealing fugitive emissions and any other fluids. If the seal has small springs, keep them out of the fluid or they will clog easily. There are plenty of seal designs that have this non-clogging feature.

A wide hard face is excellent for the radial movement we see in mixer applications and those seals that are physically positioned a long way from the bearings.

You will also need some sort of vibration damping for high temperature metal bellows seals because they lack the elastomer that normally performs that function.

Use designs that keep the sealing fluid at the seal outside diameter, or centrifugal force will throw solids into the lapped faces and restrict their movement when the carbon wears. You should also use unfilled carbons for the seal faces as they are the best kind and the cost is not excessive.

Also, be sure you can identify all seal materials because it is impossible to troubleshoot a “mystery material”.

Do not let the supplier tell you that his material is proprietary, and if that is their attitude, find another supplier or manufacturer, otherwise you deserve all the problems you are going to have.

Try to keep elastomers away from the seal face. The elastomer is the one part of the seal that is the most sensitive to heat, and the temperature is hottest at the faces.

Any dangerous or expensive product should also be sealed with dual seals. Be sure the hydraulic balance is in both directions or you are gambling that one of the faces might open in a pressure reversal or surge.

Lastly, if the design has a carbon pressed into a metal holder, be sure the carbon was pressed and not “shrunk in”. Pressed carbon will shear to conform to irregularities in the metal holder, helping to keep the lapped faces flat.

Cartridge seals are the only design that makes sense if you want to make impeller adjustments, and they are a lot easier to install because you do not need a print, or to take any measurements to get the correct face load.

Cartridge dual seals should have a pumping ring built in and you should use buffer fluid (lower pressure) between the seals whenever possible to avoid product dilution problems.

Avoid any type of oil as a buffer fluid because of oil’s low specific heat and poor conductivity.

Depending upon the application, you will have to decide if this support bushing has to be retained axially.

Split seals also make sense in just about any application that does not require dual seals or fugitive emission sealing (leakage measured in parts per million).

Split seals are the only design you should use on double-ended pumps, otherwise you will have to replace both seals when only one seal has failed.

They also allow you to change seals without having to do a realignment with the pump driver.

Do not lubricate seal faces at installation, and keep solids off the lapped faces. If there is a protective coating on the seal faces be sure to remove it prior to installation.

Lastly, when installing in a vertical application, be sure to vent the stuffing box at the seal faces. You may have to install this vent if the pump manufacturer never provided it.

Many cartridge seals have a vent built in that you can connect to the pump suction or some other low pressure point in the system.

Take care of the seal

The last step in achieving a good seal life is to continually take care of it. Seals prefer to be sealing a cool, clean, lubricating liquid, and while we seldom have one of those to seal, maybe you can apply an environmental control in the stuffing box area to change your product into one.

If you are using a jacketed stuffing box, be sure the jacket is clean. Condensate or steam are the best fluids to circulate through the jacket.

Flushing is the ultimate environmental control as it causes product dilution, but if you are using the correct seal you won’t need much flush. Four or five gallons per hour (notice I said hour not minute) should be enough for that type of seal.

You should also keep the fluid moving in the stuffing box to prevent a buildup of heat. Suction recirculation will remove solids that are heavier than the product you are sealing.

Since that is the most common slurry condition, use suction recirculation as your standard. Also, learn where not to use it.

Dangerous products will need an API. type gland if you elect not to use dual seals. The disaster bushing that is part of the API. configuration will protect the seal from physical damage if you should lose a bearing when the pump is running.

Ensure that the API connections are made correctly. It is easy to mix up the four ports and get the flush or recirculation line into the quench port.

Try not to put too much steam or water through the quench connection or it will get into the bearing case. Leakage out the drain connection is often perceived as a seal failure by operators. Be sure they know the difference.

Does anyone ever do all of these four things? Unfortunately not. If we did, 85 or 90 per cent of our seals would be wearing out, rather than the ten or 15 percent that do. The prematurely failed seal with plenty of carbon face left continues to be the rule.

The most common excuse we hear to explain our lack of good seal life is that there is never time to do it right, followed by the cliché, “But there is always time to fix it.” Most of us do one or two of the necessary steps and experience an increase in our seal life. There is nothing wrong with an increase in seal life, but that is a long way from wearing out seals.

Think about it for a minute. If the seal is lasting a year, how big can the problem be? The temperature cannot be too high or the pressure too severe. If that were true it wouldn’t take a year to fail the seal. The product can’t be too dirty for the same reason.

We often find the problem is as simple as a seal design that is fretting the shaft, causing a leak path through the damaged sleeve or shaft. Other times we find that the flush that is used to clean the lines once a year is the culprit, and no one is changing the seal materials to reflect this threat to the seal components.