For many years the development in technology and design of taper grid couplings has been stuck in the 1970s and 80s, with leading manufactures of grid couplings being copied by cheap, inferior product from questionable manufacturers. 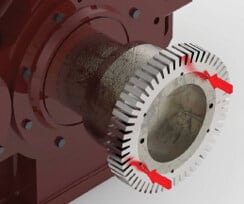 Traditionally when grid coupling teeth have worn out, you have to replace the complete hub assembly.

Drive Systems and CMD Winflex now offer customers something new in the development of grid couplings.

Drive Systems is the Australian and New Zealand distributor of CMD Winflex couplings manufactured 100 per cent in France. CMD Winflex has developed its replaceable tooth ring design hubs for both its larger sizes of the DG horizontal aluminium cover and T Series vertical steel cover couplings.

On larger size taper grid couplings, it becomes an expensive process to replace the complete hub assembly. Especially when most of the time there is nothing wrong with the hub section of the couplings, just worn teeth.

CMD Winflex Tooth Ring Hubs allow users to just replace the tooth component of the hubs. A great bonus when there is absolutely nothing wrong with the existing bore and keyway. This content was brought to you by Drive Systems. For more information, visit drivesystems.com.au.