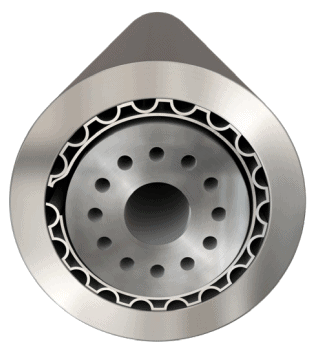 The turbocompressor has become a mainstay of modern water treatment technology, offering a mechanically simple design, reliability and good energy efficiency. Ideally suited for the production of large volumes of compressed air at relatively low pressure, they rely on bearings that can spin at high speeds with minimal resistance and for extended periods. Today, the market is dominated by two rival technologies: air foil bearings and active magnetic bearings. Edward Paro of Sulzer compares their strengths and weaknesses.

The rotor at the heart of a turbocompressor is powered by a high-speed electric motor, usually with no intermediate gearing. In operation, the motor shaft and rotor assembly spin at speeds of up to 50,000rpm, and may operate continuously for extended periods between overhauls.

Those conditions require a special type of bearing, and two approaches are commonly used in modern turbocompressor designs. Air foil bearings are a type of gas bearing, with a design that uses the pressure in a gas film to hold the moving and stationary surfaces apart, allowing low-friction, high-speed rotation.

The pressure necessary for the operation of a gas bearing can be supplied externally, or generated internally by the rotation of the bearing itself.

Air foil bearings use the latter approach and as such they are a type of dynamic gas bearing.

Air foil bearings were developed by NASA in the 1960s and 1970s, specifically for turbomachinery applications.

In the air foil design, the space between rotating shaft and stationary housing contains two thin foils, made of metal coated with a low friction material such as PTFE (polytetrafluoroethylene).

As the shaft spins, air is drawn between it and the top foil, creating a narrow gap that permits rotation with minimal friction. Magnetic bearings have excellent reliability and can handle higher forces.

Most magnetic bearing designs use magnets arranged around the bearing housing and a shaft containing ferromagnetic material.

The magnets attract the shaft and, when the forces acting on the shaft are balanced, it is held away from the housing, permitting low friction rotation.

This design uses electromagnets powered by an electronic control system that can adjust the forces they generate.

Sensors in the housing continually monitor the position of the shaft and a control system alters the power delivered to the magnets to keep the shaft in the optimal position.

They both offer low friction, and operate without the need for lubrication, making them essentially maintenance free.

The designs benefit from years of refinement and experience in demanding applications.

The two designs have different strengths and weaknesses, however, and those differences can have significant implications for the selection of the most appropriate bearing technology for a given application.

Air foil bearings operate without the need for an external power supply or control system.

That helps to reduce their cost, a major strength of the design, especially when used in smaller machines.

When an air bearing starts up, however, its parts run in contact with each other until the shaft is rotating fast enough to establish the pressurised film.

Typically, an air bearing does not “take off” until a shaft speed of 5,000rpm is achieved.

Over time, multiple starts and stops result in wear to the surface of the foils, which will eventually need to be replaced.

To minimise the number of stop-start cycles, air bearing compressors are sometimes left running at idle, a practice which increases energy consumption significantly over the lifetime of a machine.

For applications that call for a discontinuous supply of air, this characteristic of air bearings can be a significant limitation.

Air bearings are also sensitive to damage if particulate matter enters the bearing and becomes trapped between the shaft and the foil.

To reduce this risk, most air designs require stringent filtration on the incoming air.

Active magnetic bearings overcome many of these limitations.

The magnetic support system works when the shaft is stationary, so stop-start operation has no impact on machine life and idling is not required.

Other limitations of air bearings arise on larger machines.

Large air bearings can also be prone to overheating, as compression of the gas film raises its temperature.

As a result, machines of 150kW or larger typically require a separate liquid cooling system.

Magnetic bearings can tolerate higher forces, allowing their use on large machines without the need for additional cooling.

They also have good damping characteristics, which help them accommodate the transient forces generated by power surges or problems elsewhere in a machine.

The biggest perceived weakness of magnetic bearing systems comes from their complexity.

The former means that magnetic bearings tend to have a higher upfront cost than air bearings, and the latter has implications for machine design.

Turbocompressors that use magnetic bearing systems usually incorporate a backup power source, either capacitors or batteries, which can provide sufficient energy to stop the machine safely in the event of a loss of external power.

To further protect the machine in the event of a major problem, magnetic bearing designs such as those used on Sulzer’s HST turbocompressor range incorporate backup mechanical bearings that sit a few tenths of mm away from the shaft.

In the highly unlikely event that the magnetic bearing system fails, these backup units “catch” the shaft, allowing the machine to stop safely.

While the control systems required for magnetic bearings are sophisticated, developments in electronics have significantly improved their reliability and reduced their cost in recent years.

The inductive sensors used to detect shaft position are simple, robust components with a high reliability. The HST turbocompressor has used magnetic bearings for nearly 25 years with many if the original units still in operation.

As a further benefit in the Industry 4.0 world, magnetic bearing systems provide “built-in” condition monitoring capabilities for the compressor.

The control system continually collects data on the precise position of the shaft, allowing vibration, misalignment and other early warning signs of potential problems to be detected and analysed.

Sulzer has used magnetic bearings in its HST turbocompressor range for almost 25 years.

The first HST machines were installed in 1996 and they are still in operation.

This experience has given great confidence in the technology and helped the performance and reliability to continually improve.