An $8.1 million upgrade of the Gunnedah Wastewater Treatment Plant in Gunnedah, New South Wales was completed in May, securing the town’s sewage treatment works until 2038.

The project was jointly funded, with the New South Wales Government providing $1.98 million through the Restart NSW Resources for Regions Program, and Gunnedah Shire Council allocating the remaining funds from its own budget for the works.

Member for Tamworth, Kevin Anderson, said, “The $1.98 million contribution by the NSW Government to the Gunnedah Wastewater Treatment Plant is an investment in the future of Gunnedah.

“The plant has not been upgraded since 1968 and was in need of improvement to enable additional treatment volume to support a strong and growing Gunnedah.

“This upgrade is about meeting residential and business needs on the horizon as Gunnedah continues to expand to meet growth in both the mining and agricultural sectors.”

The project was in the planning for a number of years, with work beginning in 2017.

Upgrading for the future
The Gunnedah Sewage Treatment Plant (STP) uses a trickling filter and maturation pond to treat sewage. Under normal operating conditions, all of the treated effluent from the works is transferred to the North Gunnible Cotton Farm where it is used for irrigation under a reuse agreement.

While the old plant met the water quality requirements specified by the EPA it needed to be upgraded to improve reliability and increase treatment capacity. The upgrade aimed to extend the working life of the existing treatment assets until 2038; provide additional hydraulic capacity to service population growth and a planned expansion of the sewerage network to service an industrial estate; and improve workplace safety at the site.

“Council looked at all options before the decision was made to upgrade. The main factors that led to this decision were being able to keep the plant operational during construction; the cost of a new plant was over $30 million compared to the cost of the upgrade at $8 million; the trickle filter process is a cost effective way of treating effluent; nutrients left in the water from the trickle filter process are good for Councils effluent reuse program to North Gunnible Cotton Farm; and Council was able to fund the project with a $1.9 million grant from the NSW State Government.”

Introducing modern processes and equipment
Various works were completed as part of the upgrade, including: 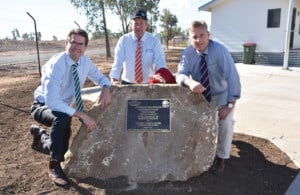 Council’s Manager Water Services, Kevin Sheridan, said some of the equipment replaced was nearly 80 years old and the upgrade has allowed new technology to be introduced to improve the plant’s efficiency.

“The dewatering building has allowed the plant to enter the world of modern technology. It has the ability to dry treat sludge to 28 per cent dry solids, where most other technology sits at around 18 per cent. It also replaces the old drying beds which were really labour intensive and unsightly. We are really pleased with the outcome,” Mr Sheridan said.

Procuring the equipment
Mr Ludlow said Council procured a number of items for the project. These included:

“The upgrade was on the inlet structure, new digester, dewatering building, sludge pump station, feed averaging tank and new amenities building the rest of the plant was all reused,” Mr Ludlow said.

“There was no added treatment process added to the upgrade, and all effluent that passes through the new inlet works is treated through the existing sedimentation tanks, trickle filters, humus tanks and maturation ponds.”

“The pumps are fitted with variable speed drives (VSDs) to assist in the balancing of flows presented to the inlet works and process streams.

“Reliability, service, durability and adaptability were all important considerations for the pumping equipment. “Energy efficiency is particularly important, so Councils design consultants added VSD’s to the inlet pumps for this very purpose of power savings and flow control.”

Meeting challenges for a successful project
Mr Ludlow said there were a number of challenges that needed to be overcome including keeping the plant running during construction and maintaining water quality.

“We needed to keep the existing plant working while the upgrade was constructed with cut overs and parts of the plant needing to be isolated for periods of time. Having an experienced contractor and involving operational staff with decisions about cut overs and plant isolation was the key to overcoming this,” Mr Ludlow said.

“Keeping Councils EPA water quality requirement while under construction with all the disruptions to the plant was also a challenge. Key to overcoming this was regular monitoring of water quality and experienced operational staff that were able to adapt and overcome obstacles that arose on a daily basis while still keeping within Councils EPA Licence conditions.”

Gunnedah Shire Mayor, Jamie Chaffey, commended those that worked on the project to ensure it was delivered on time and on budget.

“Gongues Construction was contracted for the works and has put in a fantastic effort ensuring this project has come in under budget and on time. I would also like to commend Council staff for their forward-thinking and initiative shown throughout this project,” Mr Chaffey said.

“Gunnedah is in a unique position as one of few rural towns in NSW still experiencing growth and it is important we strive to see our infrastructure match this expected growth.”

Recognised for innovation
The project is now in the running for the Institute of Public Works Engineering Australasia (IPWEA) Engineering Excellence Awards which will be held in the Hunter Valley later this year.

As part of the IPWEA’S State Conference, the awards recognise excellence in Local Government and Public Works Projects, as well as individual teams. The Gunnedah Wastewater Treatment Plant upgrade is nominated in Category 3 – Innovation in Water Supply and Wastewater, which requires nominated projects to demonstrate innovations in water supply and/or wastewater, reflect efficiencies and demonstrate cost savings.

Acting Director of Infrastructure Services and IPWEA member, Daniel Noble, said, “To receive this nomination is the icing on the cake and a sweet reward for the hard work of the project managers, in particular Manager of Water Services, Kevin Sheridan, who has been the driving force behind this project since its inception.”