Expanding production at the Wiluna Gold Mine Deep in the centre of Western Australia lies one of the state’s largest single site undeveloped gold projects, the Wiluna mine. Making up part of the larger Wiluna Mining Operation, the Wiluna mine holds great potential for expansion, and Wiluna Mining (formally Blackham Resources), the company responsible for the development of the mine, has big plans for the project. A major expansion of the mine including dewatering works, and the construction of a tailings storage facility and sulphide flotation plant – is currently underway with the hopes of increasing production to 100,000-120,000 ounces a year of gold concentrate, in addition to the current 70,000 ounces per year of gold dore produced from free milling ore for an annual total of 190,000 ounces of gold, giving Wiluna the potential to become one of Australia’s major gold producers.

The Wiluna mine is located approximately 750km north-east of Perth. The mine has been active and closed several times over its life, with the first iteration operating from the late 1800s to the early 1900s, and the second iteration from the 1930s to the late 1940s.

The mine then remained closed until 1984 when it opened again. It remained active until 2007 when it was put into care and maintenance before reopening from late 2008 to mid-2013 when its owner at the time, APEX Minerals, went into receivership.

Wiluna Mining purchased the mine in early 2014 and it has remained operational since.

The Wiluna Gold Mine has produced over four million ounces of gold from 20 open pits and three underground mines, making it a strong asset for Wiluna Mining.

Currently, most of the oxide ores have been sourced from the Matilda and Lakeway mining centres; however, with the new expansion, ores will be increasingly sourced from the Wiluna and the Williamson open pit at Lakeway, which has the potential to significantly increase Wiluna Mining’s resources.

“We have not even explored the underground sulphides below 500m which compared with peers like Jundee and Gwalia, is very shallow.

“There is real potential to significantly increase our resource/ reserves at Wiluna and we have many other sulphide targets, including Regent, that have significant potential.”

Stage 1 of the expansion is expected to produce 750,000 tonnes per year and Stage 2 is expected to double production to a minimum of 1.5Mtpa, pending the release of a feasibility study. Stage 1 of the expansion project is already underway, with works moving ahead despite the COVID-19 crisis putting pressure on many industries.

Mr Jerkovic said that the resource to reserve conversion drilling has already commenced, as has the construction of the tailing’s storage facility, which currently has four walls but no pumps yet.

In addition, the Rod Mill refurbishment has been completed and successfully commissioned.

The dewatering of the East-West pits and underground mine is also well underway and is currently utilising five pumps with a combined capability of pumping around 260L/s of water.

These pumps include hired diesel-driven skid-mounted centrifugal pumps and one multi-stage pump that is run down a vent shaft.

Since dewatering started last year, 3GL of water has already been removed, with another 1GL to go.

However, other Stage 1 works have been held up including the construction of the concentrator for the sulphide floatation plant, with the pandemic impeding construction.

Mr Jerkovic said that the timing on the construction of the concentrator will now need to be assessed according to how quickly Wiluna Mining can mobilise construction crews and equipment when the COVID-19 crisis concludes.

In the meantime, standard Warman pumps and dosing pumps have been procured for the sulphide flotation plant, and the Ball Mill Motor has been replaced after reaching the end of its lifecycle after 20 years.

Following the completion of stage one of the projects, Wiluna Mining will progress to Stage 2 which is estimated to double production of Stage 1 to 1.5Mtpa, equating to circa 220kozpa-250kozpa of gold concentrate.

Securing the future of Wiluna

In order to undertake the expansion of the Wiluna mine, Wiluna Mining needed to raise $52 million equity, not a small feat in the current economic climate.

However, Wiluna Mining was able to achieve this, with Mr Jerkovic saying it was a terrific achievement, especially in the worst two months the market has seen since 1987.

“We are fortunate to have a greatly supportive major shareholder in Wilhelm Zours of Delphi who has backed us to the hilt in the last eight months.

Mr Zours is a very smart and canny investor and has done his homework, been to site, spoken to our management team, and has decided to back the team and assets at Wiluna Mining when very few people would,” Mr Jerkovic said.

“There is, in some circles, still this view of Wiluna that it is a dud and that all of us at Wiluna Mining have no idea what we are doing.”

However, Mr Jerkovic said that those in the industry who understand the company’s strategy will undoubtedly see the potential of Wiluna Mining and the Wiluna Mining Complex.

“I believe the really smart people in the industry who understand our strategy and see the potential of Wiluna with the right strategy, have done their own due diligence, visited the site and spoken to the Wiluna Mining management team, and seen unlimited potential in the company; and that gives us great confidence going forward that we are on the right track to building something really substantial here.

The naysayers will miss the boat here as they usually do,” Mr Jerkovic said. 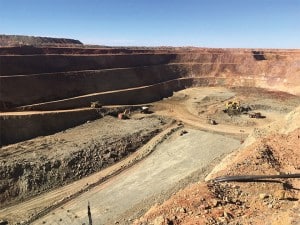 Completed dewatering works at the Williamson pit. Six months ago the pit was filled with water.

As COVID-19 has swept across the world, many industries have felt the impact. For Wiluna Mining, the safety of its staff and local communities remain a top priority throughout the unfolding situation.

“Safety of our people is always a core objective of the company and obviously given the COVID-19 crisis, we must be even more diligent to safeguard all people, including the people of the remote community of Wiluna,” Mr Jerkovic said.

“Maintaining our operations and output is also a core objective for the next 3-6 months whilst we see out this difficult time.”

Mr Jerkovic said the five core objectives of the company from a strategic point of view are the repair of the balance sheet, increase immediate operational cash flow, transition to include gold concentrate production, expand gold production, and undertake exploration and feasibility to fully develop a +250ozpa, long-life gold operation.

“Strategies 2-5 are now our focus. These strategies were established ten months ago when I changed out the old management and set a new direction for the company,” Mr Jerkovic said.

“I set a 24-month timetable for this transformation and we are ten months into it, and so far, we are on track.”

With the aim of becoming a major Australian mining company, Mr Jerkovic said that Wiluna Mining wants to be a highly profitable, professional, efficient and safe organisation for people to work and invest in.

The company is also aiming to be an industry leader in all environmental, social and governance related ventures.

Looking to the future

Looking to the future, Mr Jerkovic said that the major goal is to build Wiluna Mining into a major mining company with the Wiluna Mining Complex providing the base of its operations.

“My expertise is building substantial, multi-billion-dollar mining companies. We did it at Straits Resources. Wiluna provides the scale to be able to do that again,” Mr Jerkovic said.

“The major shareholders who have recently come on board want us to do that again, build another significant mining company using Wiluna as the key building block.”

However, Mr Jerkovic notes that Wiluna Mining is not looking at other refractory ore opportunities in Western Australia and in other regions for the time being, instead concentrating on developing the potential of the Wiluna Mining Complex before spreading its wings too far.

“There are three main gold systems in the northern goldfields. We control the central belt with the Wiluna Mining complex. To the east of us is Northern Star with Jundee and Bronzewing. To our west is Peter Cook’s Westgold.

“There are several smaller, stranded deposits surrounding Wiluna who are looking for processing solutions and are probably not of the scale to do it on their own, both free milling and sulphides deposits, and we are talking to several of them now about doing deals similar to the one we did recently with GW Resources to provide a treatment solution for them.”