Constructing one of the world’s biggest lead mines In April, Galena Mining completed construction of the box-cut for the Abra Base Metals Project, a new lead-silver mine in the Gascoyne region of Western Australia. With site preparations and surface infrastructure construction already complete, the mine is expected to be operational by 2022. Here, we take a look at the mine’s progress so far, and the facilities required for its successful operation.

Discovered in 1981, the Abra lead-silver deposit represents one of the largest undeveloped lead deposits in the world.

Abra lies within a granted mining lease, with Galena owning 86.16 per cent of the project.

Galena’s vision is to develop Abra into a high-grade, high margin operation by 2022.

The Abra site is approximately 110km from Sandfire Resources’ DeGrussa copper mine, between the towns of Newman and Meekatharra.

The mine will employ pumps in dewatering, dust suppression, earthworks, securing a potable water supply and a wastewater treatment facility for the permanent camp, and in a process plant at the mine will produce a lead-concentrate product that may be transported to the Port of Geraldton.

The path to this point has been long, but filled with promise. Galena completed its pre-feasibility study for the project in September 2018, for development of a mine and processing facility with a 14-year life producing a lead-silver concentrate containing approximately 91kt of lead and 760koz of silver per year after ramp up.

Based on an initial capital expenditure estimate of $154 million, the pre-feasibility study modelled Abra’s pre-tax net value at $528 million, with an internal rate of return of 50 per cent.

Progress on the project leapt forward in March 2019, when Kingfisher Capital announced it would invest $10 million into the company, placing the sum in two $5 million tranches at $0.40 per share. Galena then used the proceeds of this investment to accelerate works at Abra.

By July 2019, Galena completed its feasibility study of the project – and the results were promising, pointing to improvements in most key metrics.

According to the study, the mine would yield a 16-year mine life, rather than 14. Whilst the estimated capital expenditure increased to $170 million, the estimated pre-tax net value of the mine also grew to $553 million – five per cent higher than the pre-feasibility study’s
prediction. 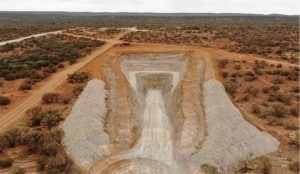 Galena announced in October 2019 that construction works had begun on the approximately $15 million site surface infrastructure program, readying the site prior to construction of the processing plant and development of the mine itself.

Activities carried out as part of this program included: Site clearing and roadworks Initial works focused on topsoil clearing and storage, ground preparation at the permanent camp site and various site and access roadworks.

These new works involved equipping the water production bores with pumps and constructing pipelines, together with construction and connection of wastewater treatment facilities.

Finally, the initial 80-person accommodation units of the permanent camp were deployed to Abra and assembled on-site, along with the final camp sized kitchen and messing facilities. On-site civil works and connection to services was also completed.

“The construction works now commenced at Abra are significant and most of them form part of what might go into a final EPC [engineering procurement and construction] package, so we’re genuinely getting a ‘jump’ on things to fast- track the overall timetable to production,” Mr Molyneux said. 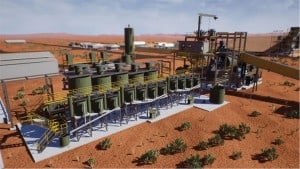 Primary refined lead is sourced from mines as a concentrate, which then goes through smelting and refining.

In February 2020, Galena’s subsidiary, Abra Mining, announced it had awarded GR Engineering Services (GRES) a $74 million conditional engineering, procurement and construction contract for the supply of a 1.2 million tonne per annum lead process plant, along with ancillary infrastructure.

Abra will use a lead sulphide flotation process plant to refine the lead concentrate.

The process for the creation of lead/silver concentrate involves the following steps:

Early grade recovery modelling of flotation data suggests that the process plant will recover between 93 and 94.7 per cent of the lead.

The concentrate is expected to contain 73 to 75 per cent lead and approximately 200g/t of silver. The processed concentrate will then be trucked via public roads to the Port of Geraldton.

Securing a water supply for the site

Abra’s estimated net raw water requirement is approximately 23.4L/s, which is expected to be supplied by aquifers within 7km of the proposed processing plant.

Galena anticipates site water needs will change as the project transitions from construction, into ramp up to a peak, and finally reducing to a steady-state. 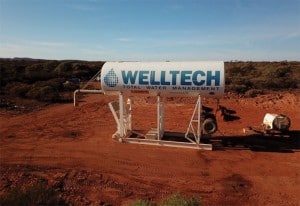 Water tank connected to production water bore 1 for temporary use in advance of completion of pipelines.

During the approximately 15 month construction phase, the main water requirements will be potable supply to the village, mining, earthworks, dust suppression and concreting.

Here, water demand is expected to be approximately half that required at steady-state production (that is, around 11L/s).

The project water requirement is projected to peak at 28.4L/s during operational ramp up, scheduled in 2022. At this time, there is initially expected to be a reduced return water from the tailings storage facility and nil mine dewatering.

Following its feasibility study, Galena has conducted further infill drilling and commissioned an independent, updated JORC Code-compliant Mineral Resource estimate to increase confidence in the early years of the mine plan.

The new drilling also defined additional high-grade lead-silver mineralisation in the north western sector of Abra’s Apron Zone that has
potential to enhance early project cash flows for the company.

Following completion of surface works and preparation of the site, Galena has completed the box-cut for the mine.

The established box-cut runs approximately 190m long (north-south) to a depth of 25m and an average width of approximately 45m (east-west).

The southern wall, which is the base of the box-cut, will house the location of the future main portal for the Abra underground mine decline. 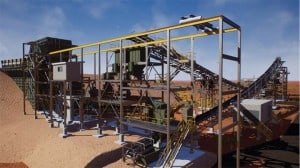 Mr Molyneux said completion of this box-cut alongside the surface works would reduce the risk of timing, access and synchronisation issues as the mine enters full construction phase.

“Abra construction is now nine per cent complete and the site is de-risked for full construction. Progress on debt financing has been slowed down by COVID-19 but we’re in robust financial shape and have been careful not to commit beyond our means,” he said.

Galena’s vision for Abra is to create a high-grade, high margin mining operation within two years.

Pending any delays to the project’s development, 2020 will see further construction, underground development and commissioning.

Production ramp up is set to commence in 2021, with 2022 being the first full year of steady state commercial production.