At the PIA’s general meeting last November elections were conducted for the positions of President, Vice-President and councillors.

Outgoing President Ron Astall was thanked for the work he had done for the PIA as its leader over the past four years, and it was noted that he will continue his work with the association as an elected councillor.

The outgoing councillors were also thanked for their work over the past year and David Alexander, Managing Director of KSB Australia, was elected as the new PIA President. 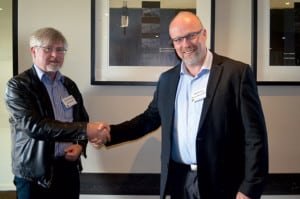 Mr Alexander has worked for KSB Australia for 21 years and held the position of Managing Director for the past nine years.

Earlier in the evening, a motion to amend the PIA constitution was passed to increase the council to eight members, with at least six being accredited representatives with full association membership.

Mr Alexander, Mr Inkster and Mr Astall are joined by Alan Rowan, Keith Sanders, Peter Passalacqua, Ashley White, and David Brooks who were elected as councillors during the meeting, with Jamie Dixon appointed at a later date.

Congratulations to Mr Alexander and all the new and re-elected members of the council.