Pump testing of a water production bore in a shallow aquifer of 6-16m deep at Element 25’s Butcherbird Manganese Project in WA has confirmed sufficient water supply for planned production.

Yields from the aquifer were higher and depths were shallower than previously assumed, potentially allowing sufficient water to be recovered from fewer, shallower bores, thereby reducing capital and operating costs for the borefield.

A number of standard pump tests were conducted to test the aquifer potential.

The results from the step test and constant rate tests were analysed using the Cooper-Jacob Method for unconfined aquifers.

After analysis of the results, a transmissivity at the BBPB03 site of 1,000m2/day was adopted for modelling purposes.

The next phase of work is to undertake groundwater flow modelling to analyse a number of potential borefield designs including the following possible pumping scenarios:

E25 Managing Director, Justin Brown, said, “Confirmation of the availability of sufficient process water from shallow, high yield, low salinity aquifers at the Butcherbird Project is an important de-risking step for project development, which remains on time and on budget.”

Samples from test bore BBPB03 were analysed for salinity with the test results shown in Table 1. The groundwater is classified as Marginal Potable, with a salinity of 1,200mg/L Total Dissolved Solids (TDS).

This is ideally suited to the proposed processing method at the project. 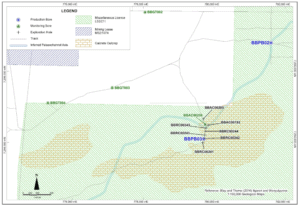 About the Butcherbird Manganese Project

The Butcherbird Manganese Project is a world-class manganese resource with current JORC resources in excess of 263 Mt of manganese ore1.

The company has recently completed a Pre-Feasibility Study with respect to developing the deposit to produce manganese concentrate for export to generate early cash flow with a modest capital requirement. The favourable economics and low capital hurdle of less than AU$15 million will allow the company to develop the project in a relatively short time frame.

This is envisaged as the first stage of a staged ramp up for the project and has the advantage of potentially providing early cash flow to strengthen the company’s balance sheet and assist in funding of the larger high purity manganese production hub which is the subject of a parallel, complimentary work stream.

The project straddles the Great Northern Highway and the Goldfields Gas Pipeline, providing turnkey logistics and energy solutions. The company is also intending to integrate renewable energy into the power solution to minimise the carbon intensity of the project as well as reducing energy costs.

A cleaner, lower carbon flowsheet and high penetration renewable energy will place Butcherbird at the forefront of sustainable metal production.

Based on the results of the Pre-Feasibility Study completed in May 2020, E25 has published a Maiden Ore Reserve for the project of 50.55Mt in the Proved and Probable categories.