A pump station in North Queensland has slashed its power bill by $20,000 a year, an audit has revealed.

Lower Burdekin Water (LBW) has saved tens of thousands on its power bill at its Kilrie Gully pump station, after implementing the findings of an Energy Savers Program audit.

Energy, Biofuels and Water Supply minister, Mark Bailey, said, LBW, which supplies water to about 400 farmers in the Burdekin, had reduced the energy consumption at the pump station by 40 per cent.

“The Energy Savers Program is a joint initiative of the Palaszczuk Government and the Queensland Farmers’ Federation that helps individual farmers tap into savings through on-farm energy audits, potentially saving tens of thousands of dollars,” Mr Bailey said.

“The Energy Savers audit recommended the existing timer based motor control for the 125 kW pump be replaced with a variable speed drive, which has reduced energy demand by 160kVA.

“The up-front cost of implementing the change will be recouped in about two years from lower power bills.”

“LBW is now installing three 40 kW variable speed drives at its Lilliesmere pump station and a business case has been prepared for a similar change at the larger Rocks pump station,” Mrs O’Rourke said.

“LBW has also agreed in principle to introduce the same technology at its 18 existing pump stations as funds become available and to adopt it at greenfields sites.”

Mr Bailey said the savings identified for LBW are just one example from 110 audits covering all of the main agricultural sectors in all regions of the state, that collectively have revealed the potential to reduce power bills by $3 million per year.

“To date, one in five of the audited farm enterprises has implemented some or all of the recommendations to reduce their power bills,” he said.

“And they are reporting savings in line with those forecast in the audits.

The findings of these audits are continually being shared with primary producers through a series of case studies available online and at field days.

The Energy Savers Program is a partnership between the Department of Energy and Water Supply, Ergon Energy and the Queensland Farmers’ Federation. 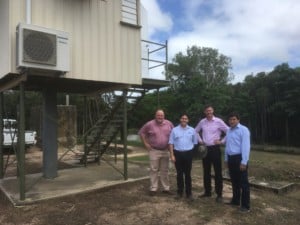