When pumps at Energy Australia’s Mt Piper Power Station needed to be repaired, the energy utility knew exactly who to call on.

The power station features Ebara pumps, for which Hydro Australia are the authorised service repair agents in Australia. After initial discussions and dismantling of the pump had taken place elsewhere, the pump’s damaged and dismantled inner cartridge was sent to Hydro Australia’s Morwell workshop in the Latrobe Valley, Victoria. After a detailed inspection, report and work scope was prepared, the decision was made for Hydro Australia to carry out the refurbishment.

The pump design is typical of many Australian coal-fired power stations. Multistage, barrel casing, with a two-piece inner volute operating at over 5,600RPM. Although Hydro Australia has been a major pump refurbishment contractor to Energy Australia’s Yallourn Power Station in Victoria for many many years, this was the first such contract at Mt Piper.

The scope of work required included replacement of all the usual consumable components expected with a rebuild, plus new impellers, balance drum, balance sleeve, wear rings and the shaft – all in all, a major repair. The other significant component requiring attention was the inner volute. Initially it was expected that the inner volute would require replacing, however Hydro Australia had completed similar work on several other rebuilds previously, and felt that it could be repaired instead.

The inner volute would require a full weld repair at every internal and external locating diameter. Once the welding was completed by Harvest Engineering in Melbourne, stress relieving was the next step, followed by machining and lapping of the split face joint and full line boring to renew all the internal locating diameters. This took place at Hydro Australia’s workshop, with round-the-clock shifts required at various stages.

Hydro Australia’s repair methods are rarely as the pump was originally built. With the advances in material technology, composite materials, designs, procedures and standards, all Hydro Australia refurbished pumps will return to the client a technically better pump and this case was no different. Time to refurbish means time to improve and upgrade for reasons of efficiency, reliability, long-term performance and increased mean time between repairs (MTBR).

An additional problem with the boiler feed water pumps is corrosion problems to the mechanical seal water jackets.

Unlike newer design feed pumps, the water jackets on the Ebara pumps are not removable items. The jackets are welded in place and form an integral part of the barrel casing on one end and the discharge head on the other.

To repair this problem, Hydro Australia was able to put their new on-site, in-situ machining system to work for the first time in NSW.

A secondary contract was issued for the on-site work. In short, this contract included removal and installation of the Hydro Australia refurbished cartridge, overhauling the feed pump booster pump, repairing the water jackets and laser aligning the entire train including the booster pump, gearbox, Voith fluid coupling and feed pump.

Hydro Australia’s suggestion was to machine and remove the existing water jackets, manufacture new stainless steel inserts and face plates and weld in place. With this task never completed previously, and with a lot of unknowns, including new obstacles encountered along the way, timing was a concern. With continual communication and working together successfully the entire job continued trouble free.

All the barrel repair work was completed on-site, in situ with the removable discharge head sent to the Hydro Australia workshop in Victoria on a fast turnaround, with a similar work scope to that of the barrel.

Other checks were carried out on-site including a full barrel concentricity and parallelism inspection using the site machining equipment, and weld repairs to O-ring grooves in the discharge head.

The work was completed several days ahead of schedule, on budget and to a safety level meeting Energy Australia’s high standards, completely incident free. 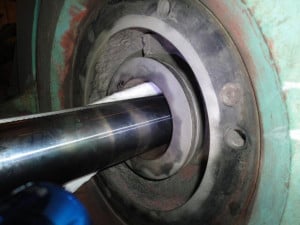 The corrosion on disassembly. 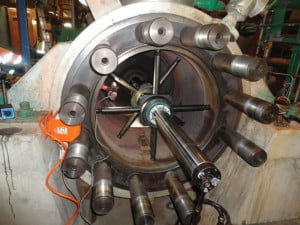 Many of the pumps installed at power stations and in other industry applications throughout Australia are in the range of 25 to 35 years old, be it a condensate pump, cooling water pump, booster pump, boiler feed pump or a simple axially split case water pump. With recent advances in materials technology, composite materials, machining tolerances, component design, assembly practices, and with enhanced attention to detail, the MTBR of Hydro Australia-refurbished pump equipment is continuing to increase substantially.