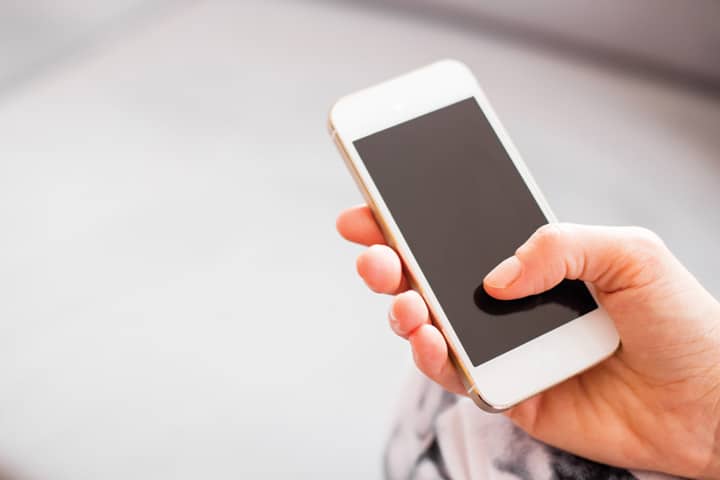 Unbalance is one of the most common causes of high vibration in machines. If vibration analysis shows that the largest component in the spectra is at 1X (i.e. at the frequency corresponding to rotation speed), then unbalance is a likely cause. Balancing is therefore a regular maintenance activity in many workplaces. Ray Beebe explains a method that has been successfully used on rotors large and small, with the only instrumentation required for balancing being the stopwatch feature of a mobile phone.

It is assumed that the severity of vibration has been assessed as unacceptable according to sources based on wide experience, such as the relevant part of AS 2625.4-2003 (or ISO 10816) Mechanical vibration – Evaluation of machine vibration by measurements on non-rotating parts.

Even if a machine’s vibration meets such criteria, it may be causing annoying vibration of adjacent parts.

Looseness is another of the most common causes of vibration and a check of foundation tightness is usually recommended before proceeding to balancing.

If suitable facilities are not available, this expedient method is suggested. It has been used successfully for short rotors such as pump impellers. I do not know the source of the method, but I learned it in my first job at a power station in the 1960s. The equation used is derived from the theory of the compound pendulum.

How the timed oscillation method was used on pump impellers

Higher than desired 1X vibration was evident on a ten-stage boiler feed pump of the ring-section design (where each stage’s impeller is assembled in turn with its matching stationary section). At the time, the available balancing machine could only hold the total assembly, requiring all the impellers to be assembled on the shaft. Balance mass corrections could be made only on each of the end impellers: not the ideal when unbalance was likely to be distributed along the rotor line.

A better result would be obtained by balancing each impeller individually. We clamped a pair of parallel ways set to be horizontal to the bed of a milling machine. A mandrel was made to suit the impellers so that each in turn could oscillate freely on the parallel ways.

The impellers should be inspected to ensure that the discharge areas around the impeller periphery are even within about 1 per cent. On another design of multi-stage boiler feed pump, high 1X vibration was eventually found to be caused by the use of replacement non-OEM impellers that had outlet widths varying up to 10 per cent. The resultant fluid pulse gave similar vibration symptoms to that of mechanical unbalance – but the impellers had been balanced individually mechanically .

The process for each impeller in turn was: 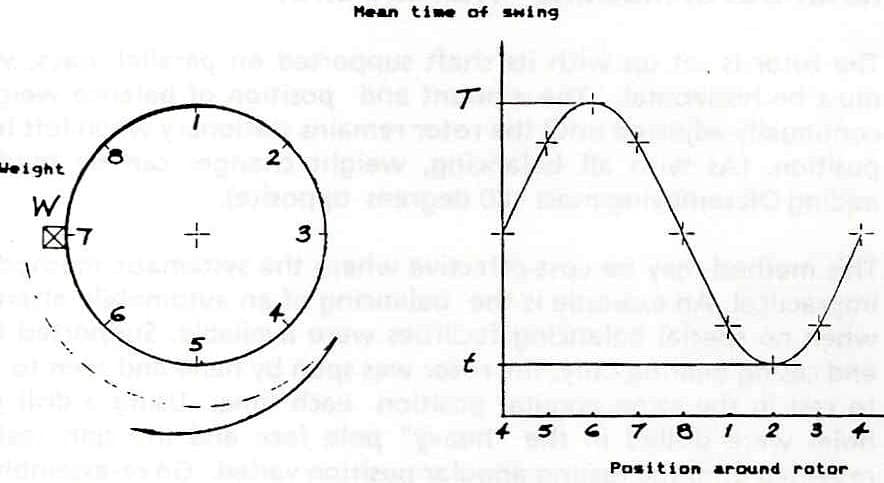 Figure 1.
To-and-fro oscillation from the horizontal position (left) and the mean time of swing plotted on a graph (right).

Application to other machines

This method has also been used in place on overhung fans up to 2m diameter and also on smaller fans with two bearings that are nearer to what are considered ‘long’ rotors. The rotor must be in rolling element bearings, and not be affected by crosswinds. 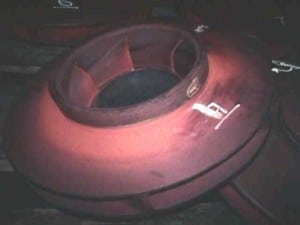 An impeller where this method was used. The reddish colour is due to the magnetite layer that is established throughout the steam/water cycle.

For field balancing of fans, the usual safety precautions for opening any machine must of course be taken to isolate mechanically and electrically so that process gases are excluded and the machine cannot be switched on while the work is in progress.

For fans, the balance adjustment will usually be attaching a mass, rather than removing metal. The mass is fixed on the impeller at position of maximum swing time. The fixing must of course be sufficiently strong not to allow the mass to fly off at operating speed. If welded, allow for the mass of the weld.

Following 28 years in power generation in Australia and the UK, where he worked in condition monitoring development and application of pumps, steam turbines, heat exchangers, boilers and associated machines, Ray joined Monash University in 1992 and was a Senior Lecturer and Coordinator of the postgraduate online distance learning courses in maintenance management and reliability engineering from 1996 until retiring in 2010. He continues teaching his subject of condition monitoring.

Ray has written three books and over 80 papers for conferences, and many have appeared in journals worldwide. Ray’s consulting activity has served over 35 customers in Australia and overseas. Ray is a Fellow of the Institution of Engineers, Australia, A Chartered Professional Engineer (retired) and a Lifetime Member of the Asset Management Council.